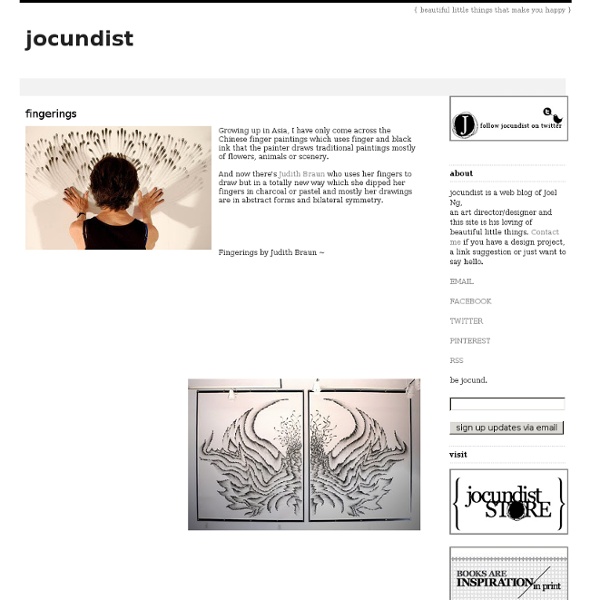 Growing up in Asia, I have only come across the Chinese finger paintings which uses finger and black ink that the painter draws traditional paintings mostly of flowers, animals or scenery. And now there's Judith Braun who uses her fingers to draw but in a totally new way which she dipped her fingers in charcoal or pastel and mostly her drawings are in abstract forms and bilateral symmetry. Fingerings by Judith Braun ~

Before I Die? in NOLA ? Candy Chang What matters most to you Interactive public art project that invites people to share their personal aspirations in public. After losing someone she loved and falling into depression, Chang created this experiment on an abandoned house in her neighborhood to create an anonymous place to help restore perspective and share intimately with her neighbors. The project gained global attention and thanks to passionate people around the world, over 1000 Before I Die walls have now been created in over 70 countries, including Kazakhstan, Iraq, Haiti, China, Ukraine, Portugal, Japan, Denmark, Argentina, and South Africa. 2011, New Orleans, LA. Cordoba, Argentina. Najaf, Iraq. Brooklyn, NY. Almaty, Kazakhstan Savannah, GA. Pohang City, South-Korea. San Francisco, CA. Johannesburg, South Africa. Cordoba, Argentina.

My pictures, instead of being boxed up by lumbering bars of gold, are My pictures, instead of being boxed up by lumbering bars of gold, are disposed generously between latitudes, equinoxes, monsoons Graphic design in Spain, 1939 - 1975 Title: Rudyard Kipling From the book Pioneers of Spanish Graphic Design by Emilio Gil of Tau Design Will 50 Watts The National Portrait Gallery Gardens Flourish on Top of City Busses | Urban Gardens | Unlimited Thinking For Limited Spaces February 1, 2011 by Robin Plaskoff Horton Bus Roots is a living garden planted on the roofs of city buses. It’s an effort that rose out of New York City designer Marco Antonio Castro Cosio’s graduate thesis at New York University. The project aims to reclaim the forgotten space on the tops of city buses, while enhancing the quality of urban life by proliferating green spaces on these unused bus roofs. A prototype of the rolling gardens has been installed on the roof of the BioBus, a mobile science laboratory and the first bus with an extensive green roof system. It has been growing for five months while travelling around New York City and as far as Ohio. Bus Roots joins the ranks of mobile gardens planted on trucks, trains, and other roving sites. Raising the Roots Cosio estimates Bus Roots can add greatly to the city’s green space. For more info or to support the project, contact the designer.

Tangible Earth scraps. love these totally amazing and original paper sculpuresmade by anna-wili highfield the paper sculptures are created from archival cotton paper, that is painted, then torn and sewn together, to create the figure of an animal.found via man shops globe OK Great » Blog Archive » Yuken Teruya Yuken Teruya is cut from the same mold as Peter Callesen, however he brings his paper-slicing skills to found objects and waste, creating something new out of something useless or discarded. It’s almost as if he’s freeing the inner life from the dead objects he collects. (via Creative Tempest)

Beautiful Chandelier by Benoit Vieubled This very beautiful chandelier was designed by Benoit Vieubled. His use of 15 vintage globes created a stunning soft glow in this stairwell. Journal, planner or notebook - ecosystem™ - 100% recycled paper Origami Pendants « UME ORIGAMI Ahoy! I come bringing gifts! (Not really… just a new blog layout…) The columns of the previous one were not big enough to really post my work so I thought this might be a better solution. This happy pendant was upcycled from an old dictionary bound for the trashcan. After experimenting with wire for a billion hours, I finally figured out a nice method to string beads through the center to give the pendant a little extra oomph! Like this: Like Loading... SOCIAL MEDIA FOR YOUR BUSINESS: WHORING OUT YOUR TWITTER AND FACEBOOK One of the most asked about questions is "How do I use social media for my business?"..Translation, "How can I whore my business out on Twitter and Facebook? As you know, I myself am a "Twitter Quitter", having shut down my account since it didn't increase sales or add any value to my business. 1. 2.Social Media ResourcesResources to help you with using and promoting your social media for business 3.Don't Forget to make sure the button is working! Most Importantly .....just because you posted new images on your social media accounts or Etsy store doesn't mean people will rush to buy them.