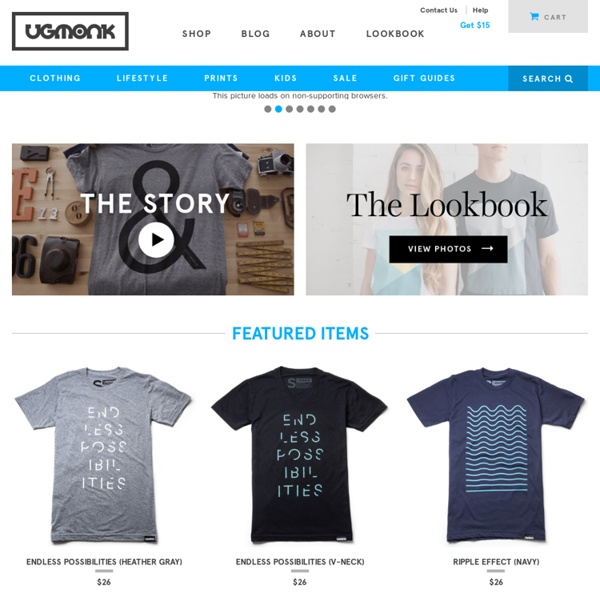 The Story of Ugmonk: From Side Project to Lifestyle Product Empire A love for typography and minimalistic design is all it took for designer Jeff Sheldon to get started on a life-changing path. A designer by day, and entrepreneur by night—Jeff has been able to build an online t-shirt, and lifestyle product empire over the past few years. In this customer spotlight, we catch up with Jeff and learn more about the growth and development of Ugmonk. This Temple business course's students have raised over $260K for social causes - Generocity Philly In room 113 of Temple University’s Speakman Hall this past Tuesday, five aspiring social entrepreneurs shared a story about pet therapy organization Paws for People: An 8-year-old boy with leukemia named Ethan was afraid to go through radiation, but his anxiety eased with the help of a therapy dog from the organization. The presenters emphasized several times that they “really believe” in the Paws for People mission and its ability to impact lives. They pledged to bolster the organization by promoting its online donations wish list, fundraising on its behalf and increasing its visibility via social media. They said they’ll also help out at Paws for People’s upcoming Easter Bones Hunt event as well as throw their own awareness event — a “destress” day, during which therapy animals will visit Temple’s campus to hang out with students. At the end of the spiel, a panel of judges gave them feedback on their plan, Shark Tank-style. Dr.

50 Minimal Sites Since Web Designer Wall launched, I've been featuring a lot of graphic intense websites such as the artistic, large background, vintage, and illustrative styles. Now it is time to feature the minimalist design. Here is a massive list of 50 minimal sites. See how designers use minimal elements to create high visual impact — less is more. The Free Library is opening a resource center for social entrepreneurs - Generocity Philly Librarians are charged with curating information on subjects that demand attention. That said, social entrepreneurship just demanded a hell of a lot of attention, because the Free Library of Philadelphia is opening up a whole department dedicated to fostering the growth of new social enterprises and nonprofits. The Business Resource Innovation Center (BRIC) is expected to have its own space in the Central branch in the next three to five years, but programming is launching in the next few weeks. On the surface, BRIC is a merging of sorts between the library’s Business, Science & Industry Department and the Regional Foundation Center, but more robust and focused specifically on accelerating aspiring social entrepreneurs.

Retail Locations If you have any questions about an individual store’s release details, please contact the store directly. Many of our retailers offer our products for sale on their website as well. Please visit here for Canadian Locations: Canada Retail Accounts How I, "A 16 year old kid" was able to build over 40k in sales store in the past 6 months starting with nothing - Ecommerce Discussion — Ecommerce University I'm making this post to hopefully inspire some of you guys. Well, hi I'mJames. I'm 16 years old and I own inspirinqco.com which I created 6 months ago and has had over 40k in revenue.

The Most Meaningful Manicure in the World February 17th, 2016 The Most Meaningful Manicure in the World By KIND Editor Her name was Courtney. She was turning eight years old and diagnosed with a terminal illness. This is what TreatmintBox looks like when LIVESTRONG is on board - Generocity Philly Back in February, TreatmintBox founder Kimberly Fink and Chief Product Officer Ty Burrowbridge let on to the fact that the social enterprise had a few big announcements in the pipeline for their subscription cancer patient care packages. Among the handful of works-in-progress was both a possible appearance on a Shark Tank-esque spinoff series and potential partnerships with large institutions and lifestyle brands. No word on the reality spinoff just yet, but the social enterprise did just launch a limited edition care package called BraveBox, designed specifically for survivors, in partnership with the LIVESTRONG Foundation. LIVESTRONG blog The partnership model works like this: And here’s what they look like:

How Bethesda Project is measuring its impact on homelessness - Generocity Philly Bethesda Project touts its reputation as “the last resort” for the chronically homeless, and that means the nonprofit approaches the issue a bit differently than other homelessness providers. Its programming is designed to adapt to the personal needs of every homeless individual in its care — an approach that sounds like it might be inherently difficult to scale. “No two people exit street homelessness in the same way.

We Asked 40 Successful Business Owners for Their Best Piece of Advice Entrepreneurs are bound to hit a few snags on the road to success, but it's often those very snags that teach them the most about running a business. Learning where successful entrepreneurs went wrong (or right) can help new business owners avoid common pitfalls and get a valuable leg-up on the competition. With that in mind, we pored over hundreds of Shopify Success Stories to find actionable advice from seasoned entrepreneurs and established business owners. After careful consideration, we narrowed our selection down to the 40 you'll find below. If you find a piece of advice that resonates with you, click the Tweet link to share it with your followers! 1.

18 Under 18: Meet the Teen Entrepreneurs Who Are Changing the World Before they’ve even graduated from high school. Noa Mintz started her first business in 2008, running art classes for kids during the summer for a small fee. Two years later, she founded a children’s party planning business. The 30 Most Influential Teens of 2016 To determine TIME’s annual list, we consider accolades across numerous fields, global impact through social media and overall ability to drive news. In the past, we’ve recognized everyone from singer Lorde to golf champion Lydia Ko to political activist Joshua Wong. Here’s who made this year’s cut (ordered from youngest to oldest): JB Lacroix—Getty Images Maddie Ziegler, 14