Food Facts. Food Safety. New Health Concerns. Forget Pizza. If you’ve followed the headlines, you know that the Mediterranean diet has been associated with a range of health benefits. 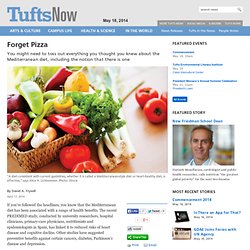 The recent PREDIMED study, conducted by university researchers, hospital clinicians, primary-care physicians, nutritionists and epidemiologists in Spain, has linked it to reduced risks of heart disease and cognitive decline. Other studies have suggested preventive benefits against certain cancers, diabetes, Parkinson’s disease and depression. So it may surprise you to learn that there’s no such thing as an official Mediterranean diet—not in the sense that there’s a South Beach or Zone or Atkins diet. The dietary plans tested in recent studies showing the benefits of the Mediterranean diet vary widely—from 2 ounces of vegetables daily to 19 ounces, for example.

But by and large, none of them is that far off from the latest Dietary Guidelines for Americans. That’s Italian? The heaping helpings of cheese we associate with pasta dishes and pizza are out, too. Mum's Not Having Chemo. After just a few weeks of intravenous vitamin C injections, Ozone therapy and manic supplement buying, Mum’s credit card had taken a battering. 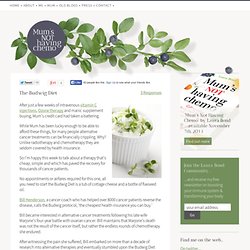 While Mum has been lucky enough to be able to afford these things, for many people alternative cancer treatments can be financially crippling. Why? Unlike radiotherapy and chemotherapy they are seldom covered by health insurance. So I’m happy this week to talk about a therapy that’s cheap, simple and which has paved the recovery for thousands of cancer patients.

No appointments or airfares required for this one, all you need to start the Budwig Diet is a tub of cottage cheese and a bottle of flaxseed oil. Bill Henderson, a cancer coach who has helped over 8000 cancer patients reverse the disease, calls the Budwig protocol, ‘the cheapest health insurance you can buy.’ Bill became interested in alternative cancer treatments following his late wife Marjorie’s four-year battle with ovarian cancer. So how does it work? Food Standards Australia New Zealand. My Plant-Based Food Guide Pyramid. There are almost as many food guide pyramids out there as there are diet books. 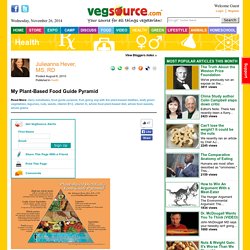 I have yet to find one that meets my standards for an optimal plan. Thus, I decided to work with my graphic designer, Sherri Nestorowich, to create a visual guide for the whole food, plant-based diet I recommend to my clients and students. What makes mine unique is the fact that I have fruit and vegetables at the bottom (right above the need for daily exercise and fluid consumption). Although people may disagree with this decision, I made it based on evidence showing a strong association between higher intake of fruit and vegetables and decreased incidence of chronic disease: In the vegetable category, it includes carotenoid-rich and starchy vegetables. Fruit contributes vitamins A, C, some B vitamins as well as some minerals.

Further, I have a separate category for leafy green vegetables additional to the foundational vegetable recommendations. Food Groups and the Food Pyramid. The Food Pyramid The Food Pyramid is a visual image illustrating the contributions of each group of foods that make up a healthful diet. 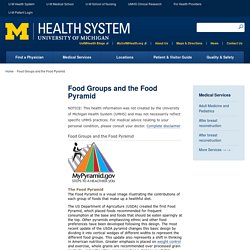 The US Department of Agriculture (USDA) created the first Food Pyramid, which placed foods recommended for frequent consumption at the base and foods that should be eaten sparingly at the top. Other pyramids emphasizing ethnic and other food preferences have been developed following this design. The most recent update of the USDA pyramid changes this basic design by dividing it into vertical wedges of different widths to represent the different food groups. This update also represents a shift in thinking in American nutrition.

The new USDA Food Pyramid is meant to be used in conjunction with the Web site (mypyramid.gov), where information about a person's age, gender, and physical activity level is used to calculate a personal recommendation for the amount of each food group to be eaten daily. This Color-Coded Chart Helps You Pick the Most Nutritious Produce. This Infographic Shows the Phytonutrients You Need to Stay Healthy. Food Pyramid Submissions. How Federal Food Subsidies Turn the Food Pyramid Upside Down - yearofplenty. US Food Pyramids Compared » Graphic Sociology. Food Pyramids, the backstory The United States Department of Agriculture has been in the business of creating one particularly important information graphic: the food pyramid. 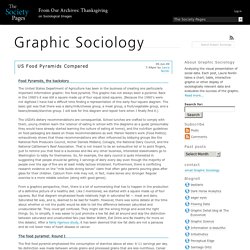 This graphic has not always been a pyramid. Back in the 1980′s it was still a square made up of four equal sized squares. (Because the 1980′s were not digitized I have had a difficult time finding a representation of this early four-square diagram. The basic gist was that there was a dairy/milk/cheese group, a meat group, a fruit/vegetable group, and a beans/breads/starches group.

The USDA’s dietary recommendations are consequential. From a graphics perspective, then, there is a lot of summarizing that has to happen in the production of a definitive picture of a healthy diet. The food pyramid: Round I The first food pyramid emphasized the consumption of starches above all else: 6-11 servings per day.

So why not just come out and tell people not to eat candy, soda, chips, cake and ice cream? Mypyramid.gov Next?