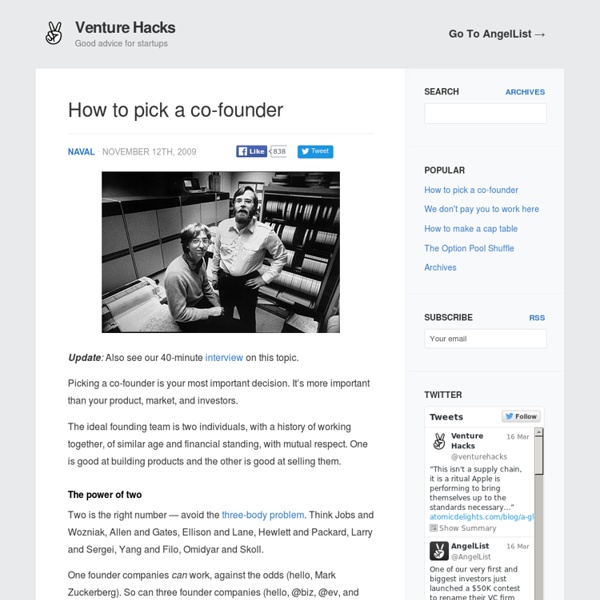 Naval · November 12th, 2009 Update: Also see our 40-minute interview on this topic. Picking a co-founder is your most important decision. It’s more important than your product, market, and investors. The ideal founding team is two individuals, with a history of working together, of similar age and financial standing, with mutual respect. One is good at building products and the other is good at selling them. The power of two Two is the right number — avoid the three-body problem. One founder companies can work, against the odds (hello, Mark Zuckerberg). Two founders works because unanimity is possible, there are no founder politics, interests can easily align, and founder stakes are high post-financing. Someone you have history with You wouldn’t marry someone you’d just met. One builds, one sells The best builders can prototype and perhaps even build the entire product, end-to-end. The seller doesn’t have to be a “salesman” or “business guy”. Aligned motives required Don’t settle FAQs Related:  jumbo • Co-founders : Build the best team for you start-up

Original Answers To Interview Questions Throughout your career, you will participate in many, many job interviews. In all of these interviews, there are a few questions you will hear time and time again. What are your strengths? What are your weaknesses? Why should we hire you? Your answers to the cliché questions say a lot about you. Here are seven of the most cliché interview questions and how to answer them with originality: 1. 2. 3. 4. 5. 6. 7. Even though all of these questions are fairly cliché, you can use them to truly shine in your interview.

On trust, founder fall-outs, and 6 steps to getting things back on track | Carlos Espinal Originally published on Venturebeat – Aug 22, 2014 Relationships are built on trust, and they require work to keep alive and well. In his book The Trust Edge, David Horsager outlines the eight pillars he believes enable trust to occur within a relationship. The eight pillars are clarity, compassion, character, competency, commitment, connection, contribution, and consistency. Should any one of these start faltering, a relationship can quickly start falling apart and possibly lead to permanent damage. In the craziness that is an early-stage startup, where founder roles are sometimes ambiguous to start with (even more so with leading co-founders), it’s no surprise that many of the reasons for companies falling apart are related to founder disputes and loss of trust between co-founders. Note: On this post, the focus is not about whether companies that have a clear CEO are better off than those that are joint efforts from the start. So what can you pro-actively do? 1. 2. 3. 4. 5. 6.

Why Diversification Results In Mediocrity “Diversification is a protection against ignorance. It makes very little sense for those who know what they are doing.” -Warren Buffet While there is unquestionably some truth to the idea that the world is often too random to literally make just one bet, the widely held assumption that diversification is a free lunch is just plain wrong. Just as there is benefit to be derived from diversification with respect to risk, there is a cost, too — that of losing whatever edge you might have been able to gain from skill. Regression towards mediocrity The notion of regression comes from Sir Francis Galton‘s “Regression Towards Mediocrity in Hereditary Structure.” Figure 1 shows the tension between the “edge” gained by focus (y axis) and the gains from making numerous “bets” (x axis). Figure 1: Investment Edge vs. However, if you’re trying to earn excess returns or build a great product, diversification is the enemy. Figure 2: Investment Edge vs. Focus forces brutal prioritization

Startup Lessons - Having industry momentum at your back Two years ago, I partnered with an awesome CTO, Alex Lines, to start a company called Path 101. We didn’t get enough traction on the product and business to continue it fulltime, so we’re now working on it as a nights and weekends project as we take on other jobs. This is the 2nd of a series about what I learned starting up a company. First one is here. A few months ago, I wrote about the three types of deals VCs do. No matter what they started with, social shopping was definitely an interesting area when the company started in 2005 and got funded in 2006. That's exactly what we didn't have at Path 101 in the jobs space. I can't exactly blame investors either. On top of that, it's easier to get press if you're in an industry with some buzz around it. The other thing was that ideas don't happen in silos. It's hard, because there wasn't another industry that I really wanted to change so badly.

Equity basics: vesting, cliffs, acceleration, and exits As a cheatsheet, the “normal” equity structure is: Founder terms: 4 year vesting, 1 year cliff, for everyone, including youAdvisor terms (0.5–2.0%): 4 (or 2) year vesting, optional cliff, full acceleration on exit Getting equity structures right When it comes to equity terms, there are only 3 things to understand: vesting, cliffs, and acceleration. The problem we want to avoid is if one of us decides to quit early on, taking half the company’s stock with us. Cliffs & vesting Vesting is how we fix that. Vesting means that instead of each getting our 50% immediately, it gets given to us regularly over some period — usually 4 years. A problem this can lead to is that you can end up with loads of people who each own a tiny percentage of the company. Cliffs basically allow you to “trial” a hire or partnership without an immediate equity committment. Remember our 50/50 split, 4 year vesting? With those terms, if I quit after 6 months, I’d actually have nothing. Exits, investors, and re-vesting

The State of Consumer Technology at the End of 2014 While the modern computing era in many respects began with the IBM System/360 mainframe and further expanded with the minicomputer, normal consumers didn’t start encountering computers until the personal computer. And, while mainframes are technically still around (while minicomputers are decidedly not), what is unique about the PC is that it is very much still a part of modern life. In fact, one of the defining characteristics of the three major epochs of consumer computing – PC, Internet, and mobile – is that they have been largely complementary: we didn’t so much replace one form of computing for another insomuch as we added forms on top of each other.1 That is why, as I argued in Peak Google, many of the major tech companies of the last thirty years haven’t so much been disrupted as they have been eclipsed by new companies built during new epochs. Every epoch has had four distinct arenas of competition that emerge in order: Epoch One: The PC The PC epoch began on August 12, 1981.

Free Business Plan: How to start a venture capital fund in New York City I’ve spoken on many occasions about now New York City doesn’t necessarily need more money for early stage startups, but it definitely needs more dedicated early stage money. There’s a big difference between a random pool of stimulus money that may or may not be around next year versus an actual early stage venture capital fund that raises commitments to put early stage money to work over the next four years. In reality, VC funds are usually given the benefit of two funds. When you have that kind of commitment to a space, your presence will not only attract more entrepreneurs, but you’ll be highly incentivized to do the work to make the long term social capital and community infrastructure investments to ensure a vibrant innovation ecosystem. For whatever reason, as I’ve said before, there aren’t very many funds in NYC doing early stage investments. It's an interesting exercise. The Shadow of Union Square Ventures The answer is no--not even close. Branding Leveraging the infrastructure

Vesting schedules, equity shares and loans to founders | From Little Things A few days ago we came across this post from Rebekah Campbell, Founder of Posse.com. In a nutshell, Campbell explained the only mistake she really regrets is giving away too much equity to people who were there at the start, but didn’t end up pulling their weight. Her proposed solution is to have the business lend each founder the agreed value of their equity, in order to purchase their shares. Then if something goes wrong or a founder doesn’t pull their weight (in line with the shareholders agreement), the company rescinds the loan, and takes back the equity. There are some potential issues with this approach, which we’ll outline below. Founders leaving early or not pulling their weight is an issue faced by plenty of startups, says Niki Scevak, co-founder of Startmate and the recently launched Blackbird Ventures. “It really is the most important thing,” says Scevak. Establishing a vesting schedule: what does it mean? The vesting cliff Loan to purchase shares Am I breaking the law?