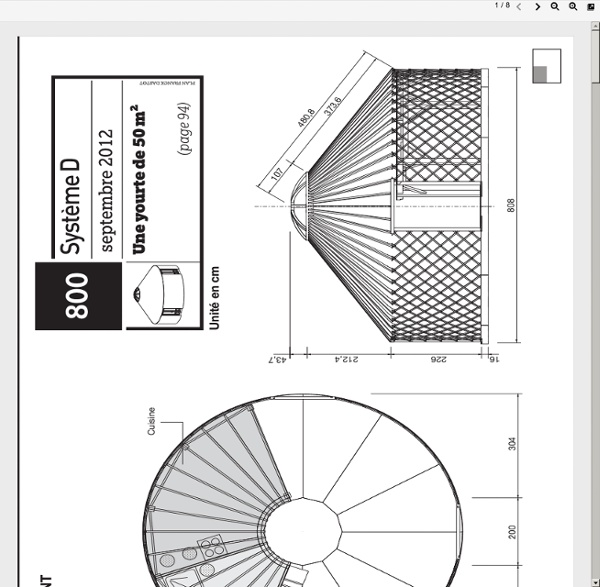 Build yourself a portable home - a mongolian yurt Yurt/Gher Construction 101 A guide to Building Yurts...or more specifically, how I built mine! Based on Knowledge Gained from "Doing it Myself", and reading about it on-line. I've now built three yurts, for myself and friends, and we go camping in Luxury in these a few times a year. If you like the outdoors, but you hate having to crawl around in pokey little tents then this one's for you! We sleep two of us in luxury in this tent, in a full queen-sized bed! We have dedicated hanging space for our clothes so they don't crumple or anything, and lockable boxes for our belongings (or a lock on the door works too!) When we invite other camping-inclined friends over for a party in our tent, we can confortably fit 15-20 people in, sitting around on cushions and lounging on the bed and on the rugs on the floor... now that's what I can a party tent! If you like pictures, please be sure to have a look at step 9 - it's got over 50 assembly photos on that step alone !

Trakke Transforms Ancient Yurt into a Packable Round House That Pops Up Anywhere for the Everyday Adventurer Created by Trakke in collaboration with eponymous designer Uula Jero and rapid prototyping workshop Maklab, the final design for Jero Yurt took years of research and development. The collaboration kicked off in 2010 after Trakke founder Alec Farmer, who was living in an 8′ Microhouse in Glasgow, met Uula, who had previously lived in a basic prototype of the packable yurt concept. Designed for easy assembly without additional tools, the lightweight and portable Jero structure offers over 130 square feet of space beneath a 15-ounce cotton canvas cover. Related: A Firsthand Look at the Magnolia 2300 Yurt – the First Energy Star Home in British Columbia “To minimize the weight while maintaining the structural integrity of the yurt we looked to nature for solutions – the unique telescopic roof struts are held together using a block designed to replicate the strength and durability of a vertebrae,” says Uula. + Trakke Images via Trakke

Yurt Buildng Here is a free copy of my book Build your own yurt, written in 1995, It has been used by a great many people who have built their own yurts. Our designs have progressed enormously since 1995. For a much more comprehensive guide see The Complete Yurt Handbook or see the rest of our website A complete guide to making a Mongolian Ger by P.R. King First edition 1995, Second edition 1997. Third Edition Fully revised and expanded for 1998 Internet Edition Jan 2000 The Yurt The English word Yurt comes from the Russian Yurta describing a circular trellis walled framed tent. The Kirgiz yurt with bent-wood roof poles and crown and a domed overall shape. The two tiered yurt with a pointed roof and two layers of wall section placed one on top of the other. The Mongol or Kalmuk ger with straight roof poles, a heavy timber crown, often supported by two upright poles, and fitted with a wooden door. This proven design is equally well suited to the many uses for moveable dwellings in this country.

Portable Yurts from Go-Yurt We used to scoff at yurts as being a bit crunchy granola for TreeHugger, but have become quite fond of them after seeing how light a footprint they have, and how comfortable they can be. While the Mongolians developed the yurt as a form of mobile housing, most we have seen are have been permanently installed. Howie Oakes spent years developing a truly portable yurt, and his own words explain it better than I could: "I have been interested in nomadic homes for a long time, and became fascinated with the yurt after weathering a number of Burning Man dust storms in a small yurt that a friend built. "I have been focused for many years on designing a truly portable yurt. A typical Western yurt will only be setup a handful of times (most only once, according to an employee of a large yurt company I spoke with). As my designs progressed, I began to think about the impact of the materials I was using on our environment. I was disappointed in the widespread use of PVC as an outer covering.

How about a yurt, dome or tipi as a spare room? -Low impact living info, training, products & services Here’s an interview with David Field of World Tents about how a tipi, yurt or dome could be used as a spare room in the garden. Lowimpact.org: Hi David – so who might this type of ‘spare room’ be for? DF: People who want their own little private haven that they can retreat to and feel at peace – to be in their own space, undisturbed, to do their own thing. Lowimpact.org: For example? DF: An art space, some kind of studio or workshop, or for meditation, yoga etc. Lowimpact.org: Why especially teenagers? DF: How can I put this? Lowimpact.org: What about neighbours? DF: Well, artists, meditators and yoga practitioners probably won’t make much noise – but teenagers might. Lowimpact.org: How would you provide power? DF: There are several options. Lowimpact.org: What about bathroom facilities? DF: If you were really keen you could have a separate yurt/dome/tipi as a compost loo / solar shower – but it may be easier to let the occupants use the facilities in the house.

Want a Cozy, Affordable Home? Build A Yurt In 1996, I bought 10 acres in Saranac Lake, N.Y. At the time, I was living in Pennsylvania, but I had visited small town New York several years before while visiting Paul Smith Forestry College, and I had always wanted to return. Following the death of my father and getting divorced, it seemed a good time to start on my dream. Until I was able to move to Saranac Lake permanently, I worked many hours at a utility company and spent my vacations camping on the land with my two kids. Over the course of those vacations, I cut, stacked, and hauled trees, and put up a shed to store my tools. I also had plenty of time to decide what to build on the land when the time came. Getting Started In 2009, when the company I was working for scaled down, I accepted a good severance package and decided to cash out and move to my land. I laid out plans for the deck and base for my yurt. To grade part of the property and pull out some tree stumps, I rented a track hoe. The Community Chips In

Building A Yurt From Scratch: Resources Yurts (and more interestingly to us, Gers) are front and center on the Milkwood research table currently. We’ve identified these structures as a likely cost-effective, climate-appropriate solution for our coming need for weatherproof, windproof, cosy crew-space come Spring at the Farm. While there’s many solutions to easily yurt oneself if you have a reasonable budget ($8-$10,000), we need to find a solution more in the DIY realm. So we have searched far and wide, and here’s what we’ve come up with in terms of build-it-yourself-from-scratch Yurt and Ger resources. Firstly I should clarify that I do mean a Yurt. More precisely, we’re looking at resources to aid us to build a Ger. Lower roof means easier heating, and warm crew quicker, with less wood burned, on a windy rainy night. This is all coming out of us being really impressed with Dave and Phoebe’s DIY yurt which came to Milkwood last Easter. Online Build-Your-Own yurt / ger resources: Yurt Forum – lots of owner-yurters here

How to Build a Low-Cost DIY Yurt from Sticks, String and Mud – Green Homes – MOTHER EARTH NEWS In 2007, I visited Bill Coperthwaite at his home in northern Maine and fell in love with the only round house I've ever been in that really works. The beauty of it grew directly from the circle itself; Bill didn't try to make it fit a squared-off floorplan: no right angles, and the big spaces (the main living space is about 30 feet in diameter) were simply divided in half or in thirds. People in one portion had privacy but could reach any other part of the building easily via a generous circular "room" that was open all the way around the perimeter. Bill's designs would make a wonderful book (in addition to his classic, A Handmade Life), but I went home wondering how I could combine his ideas with my own favorite material: mud. Creating a Structure from Basket-Woven Willow My first attempt was a hybrid stud frame building with wattle and daub infill. Folks were delighted to learn the sophisticated carpentry required to cut all the compound angles with hand saws.

Who built this yurt? | The Yurt Is Born We did : ) The site is tinkered on by me – Sarah Lecouffe Axtell – but we (Jedidiah Wiebe and I) both created and live the yurt year round in Salmon Arm, BC. <><><> o0o <><><> What did we make the yurt out of? We created a 22ft/7m beautiful, affordable (4,000$), natural dwellings using wood, wool and other abundant/salvaged materials. So do you dream of living in a yurt? We’re so pleased to be sharing with you what we have learned and hope to hear back from anyone who has found this site useful, inspiring or just enjoyed the browse around. <><><>o0o<><><> Click here to: Watch us erect the yurt in 2 minutes bam!! yurt frame, August 2013 Snow yurt, January 2014 <><><>o0o<><><> How did we know the measurements for the yurt?

How to Make a Junk Mail Yurt First Gen American First Gen American.com I live on a odd little homestead, kind of. It’s getting there, at any rate. My husband, kids and I raise chickens, bees, and this Spring will be adding ducks, pigs or maybe goats (god, I hope the goats don’t win out!). Around here things are always changing. My husband, Michael and I currently work in the construction industry with expensive art degrees behind us. We love to make things. Chez M&M What’s a yurt, you ask? It’s a round tent like structure- ours is about 300 sq ft. You say you ‘had’ a yurt? After standing for 5 years the mice got into it, along with the rain and it wasn’t the romantic hide-out it once was. What the hey is ‘papercrete’? It’s a building material that contains concrete and can be formed to make blocks. Here comes the junk mail! You need 65lbs of paper to make about 45 blocks. Paper crete mixer How much does a papercrete yurt cost? Paper (junk mail)= free Water= free (we’re on a well- pennies for the electricity to run the pump to get the water out of the well!) No.