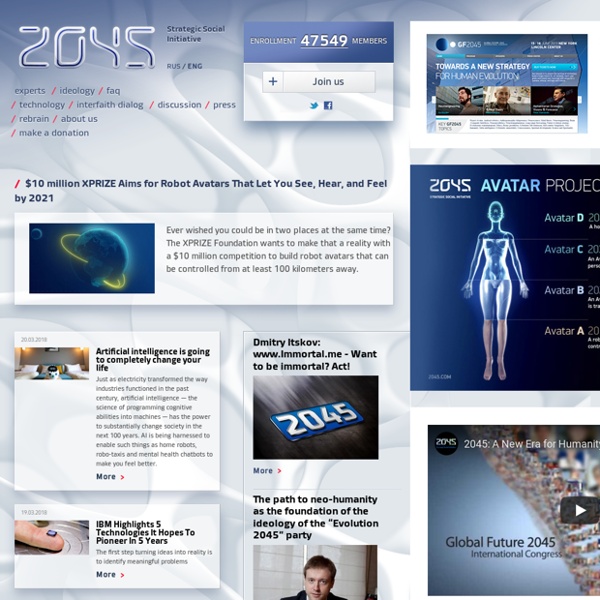 The 2045 Initiative is pleased to announce the online broadcast on April 10, 2014 of a lecture by Dr. Alexander Kaplan, Doctor of Biological Sciences, head of the Laboratory of Neurophysiology and Neurocomputing Interfaces at the Faculty of Biology of the Moscow State University. The subject of the lecture is "Neurointerfaces: towards prosthetic brain functions." The live webcast with simultaneous translation into English will be held on April 10th at 19:00pm Moscow time or 11:00am EST on the website of the 2045 Initiative at http://www.2045.com

The Most Influential Person In Modern History Gavrilo Princip would never live to see the fruits of his actions. Shockingly enough, he only received a 20 year sentence for his action due to his age. According to Austria-Hungary’s legal system, capital punishment couldn’t be applied to anyone under the age of 20. However, afflicted with tuberculosis, Princip wasn’t long for this world. He’d die in 1918 of the disease, missing the endless real world plot lines he set in motion. He was by no means extraordinary, but his one act set so many things in motion that we still live with today.

A few words about the Zeitgeist sequels Our opinion of the movie Zeitgeist should be pretty well known by now. It is an extremely bad and tedious bit of filmmaking, and the scholarship in it is awful, and we disagree with all of parts 2 and 3, as well as nearly all of part 1. And if you need a reminder about why, here are three sites dealing, respectively, with the claims that: Now that that's out of the way, let me share a few recent emails. I was wondering if you guys were aware of the (second) sequel to that terrible film, Zeitgeist, and if you plan on talking about it any time soon. If you've done it recently, I apologize for spamming you...

THE FUTURIST Magazine Releases Its Top 10 Forecasts for 2013 and Beyond Each year since 1985, the editors of THE FUTURIST have selected the most thought-provoking ideas and forecasts appearing in the magazine to go into our annual Outlook report. Over the years, Outlook has spotlighted the emergence of such epochal developments as the Internet, virtual reality, the 2008 financial crisis and the end of the Cold War. But these forecasts are meant as conversation starters, not absolute predictions about the future. We hope that this report--covering developments in business and economics, demography, energy, the environment, health and medicine, resources, society and values, and technology--inspires you to tackle the challenges, and seize the opportunities, of the coming decade. With no further ado, THE FUTURIST Magazine releases its top ten forecasts for 2013 and beyond. Video by FUTURIST magazine editor Cynthia G.