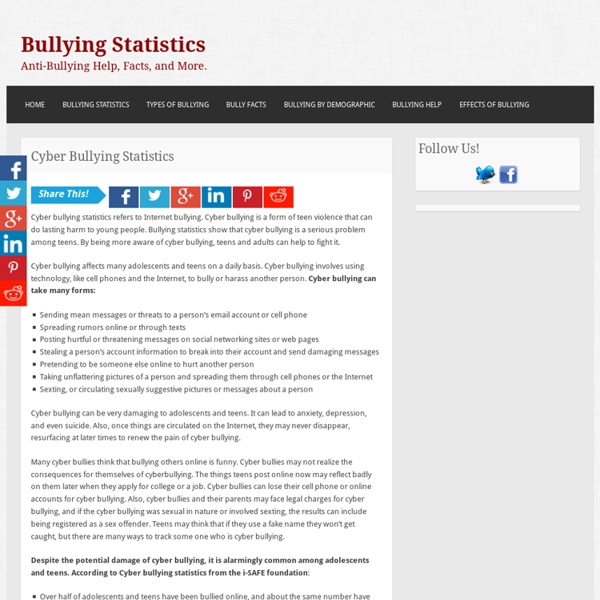 Cyber bullying statistics refers to Internet bullying. Cyber bullying is a form of teen violence that can do lasting harm to young people. Bullying statistics show that cyber bullying is a serious problem among teens. By being more aware of cyber bullying, teens and adults can help to fight it. Cyber bullying affects many adolescents and teens on a daily basis. Cyber bullying involves using technology, like cell phones and the Internet, to bully or harass another person. Sending mean messages or threats to a person’s email account or cell phoneSpreading rumors online or through textsPosting hurtful or threatening messages on social networking sites or web pagesStealing a person’s account information to break into their account and send damaging messagesPretending to be someone else online to hurt another personTaking unflattering pictures of a person and spreading them through cell phones or the InternetSexting, or circulating sexually suggestive pictures or messages about a person

Student bullying on increase, federal statistics reveal By SARAH HARTNIG School of Communication University of Miami According to the National Center for Education Statistics (NCES), the percentage of students aged 12-18 who reported being bullied at school has increased by 24.5 percent since 2003, with the latest data samples released in 2007. The studies, conducted in 2003, 2005 and 2007, examine the relationship between students who reported being bullied and their respective characteristics, including data concerning the students’ grades, year, income, sex and race. According to the studies, in 2003 only 7.1 percent of students reported being bullied. In 2005 that number jumped to 28.1 and in 2007 it soared to a whopping 31.7 percent.

What is Bullying? Aggressive behavior may be bullying depending on what happened, how often it happens and who it happens to. Find out what bullying is and what the different types are. You can also learn more about other topics related to bullying. Bullying Definition Cyberbullying - National Bullying Prevention Center Just as the use of technology itself has evolved, so has the ability to bully. Bullying, once restricted to the school or neighborhood, has now moved into the online world. Bullying through electronic means is referred to as “cyberbullying.”

6 Tools for Monitoring Your Online Reputation July 7, 2016 4 min read Opinions expressed by Entrepreneur contributors are their own. If people are talking about you and your business online, you want to know about it. As a small business, it’s important to monitor your online reputation.

Bullying Suicide Statistics Many parents view bullying as a part of growing up. Often they do not realize the devastating effects. Often it does not stop with one or two incidents but continues. It is often a steady barrage of demeaning incidents daily. Bullying Frequently Asked Questions - School Environment Frequently asked questions based on the Bullying at School publication. These Frequently Asked Questions about bullying are extracted from key concepts presented in the California Department of Education's publication titled Bullying at School (PDF). They are easy to adapt and provide information for educators, students, families, and community safety partners who wish to educate themselves and others about effective measures to prevent bullying and respond to it. What is school bullying? What are the consequences of school bullying?

4 Ways to Protect Your Online Reputation wikiHow is a “wiki,” similar to Wikipedia, which means that many of our articles are co-written by multiple authors. To create this article, 15 people, some anonymous, worked to edit and improve it over time. This article has also been viewed 82,582 times. Categories: Featured Articles | Reputation The Online Disinhibition Effect The online disinhibition effect has cost people their jobs, their income and their relationships, yet many are still oblivious to it. The first famous case of someone allegedly losing their job from indiscreet remarks made online was in 2002. Heather Armstrong, author of the blog ‘dooce‘, claimed she was fired after her colleagues discovered she’d been lampooning them online.

Why Teens Try to Commit Suicide For those who believe that bullying is not as severe or drastic as the media reports or that teasing is just a part of growing up, this article is for you. Suicide is the third leading cause of death for young adults and teenagers, and bullying has increased across the U.S. since the tragedy of Columbine High School. This incident has created a new dimension of suicide where victims of bullying resort to committing suicide as a lost hope of surviving the pain. In 2014, it is difficult to believe that teens could feel so desperate and hopeless that they strategically plan to kill themselves. Even with all the technological gadgets and other diversions that fill a teen’s life, they are still extremely vulnerable. In the U.S., over 5,000 students committed suicide just this year.

A Net Neutrality Timeline: How We Got Here Updated:The FCC Tuesday voted 3:2 to approve an order that will enshrine the policies of network neutrality — the idea that ISPs can’t hinder or discriminate against lawful content flowing through their pipes — as regulations enforced by the commission. While legal challenges remain, and the text of the full order won’t be out for a few days, here’s the gist of what’s in store, as I explained last night: The order contains three sections that set policies around transparency, create a prohibition against blocking lawful content on wireline networks and certain types of content on wireless networks, and set up rules preventing unreasonable discrimination. More analysis will come later. Update: Here’s the release discussing the order, and the full order itself will come in a few days.

Internet Addiction, Sleep Deprivation, or ADHD? With the diagnosis of ADHD on the rise in American teenagers, there is a risk of mislabeling teens with ADHD when the cause of their inattentiveness and falling grades may be related to something else entirely—like anxiety, family issues, or their media-infused lifestyle. This misdiagnosing was especially striking to me with a sixteen-year-old girl named Joy, whose family came to consult me a few months ago. Up until last year, Joy was a straight A student. All of her high school classes were either honors level or Advanced Placement (AP). The Definitive Guide to Online Reputation Management There are a lot of misconceptions about online reputation management. Some people think it’s just social media monitoring, while others believe it has something to do with public relations, and still others literally have no idea how it can impact business and sales. In this guide, I’m going to explain the role of online reputation management in today’s business and media landscape. Companies of every size can benefit from having a clear outline of its main concepts. They Are Talking About You

Wisconsin Bullying Law: Parents To Be Fined If Their Kids Are Bullies Bullying has become an American epidemic, and now one Wisconsin city has passed a law that holds parents financially liable if their kids are bullies in an effort to curb the problem. Parents in Shawano, Wisconsin, will now be subject to fines if their child (under the age of 18) bullies another child or children. As WQAD 8 reports, under the Wisconsin city’s new bullying law, parents will get a warning from police if it is determined that their child has been bullying another child. From that point, parents will have 90 days to address and curb their child’s bullying behavior. If they can’t get their bullying kid in check, it starts to become a costly problem. If, after 90 days, parents in the Wisconsin city can’t get their bullying child or children under control, under the new law they will face a $366 fine.

Internet Addiction Linked to ADHD, Depression in Adolescents Amanda MacMillan wrote in an article on CNN Health that although Internet addiction is not yet included in the Diagnostic and Statistical Manual of Mental Disorders, signs of a potential problem include spending a lot of time on the Internet, an inability to cut back on usage, a preoccupation with online activities, and symptoms of withdrawal such as anxiety, boredom, or irritability after a few days of not going online. (The diagnosis is being considered for the 2012 edition of the Manual.) Past research suggests that 1.4 percent to 17.9 percent of adolescents are addicted to the Internet, with percentages higher in Eastern nations than in Western nations, according to the study published in the Archives of Pediatrics & Adolescent Medicine.