Behaving Ethically Online: Ethics and Values. June 2015. As we have continually reported over the last couple of months – social media growth in Australia has slowed for the majority of networks. 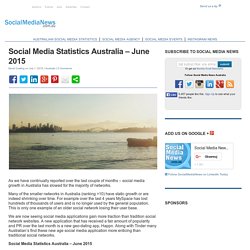 Many of the smaller networks in Australia (ranking >10) have static growth or are indeed shrinking over time. For example over the last 4 years MySpace has lost hundreds of thousands of users and is no longer used by the general population. This is only one example of an older social network losing their user base. We are now seeing social media applications gain more traction than tradition social network websites. A new application that has received a fair amount of popularity and PR over the last month is a new geo-dating app, Happn. Social Media Statistics Australia – June 2015 1. (All figures represent the number of Unique Australian Visitors [UAVs] to that website over the monthly period – unless otherwise stated above). Facebook in Australia 2015 As of the first quarter of 2015 – Facebook reported the service has 1.44 billion monthly active users.

Office of the Children's eSafety Commissioner. Facts and figures about bullying. Bullying is happening everywhere and the chances that your child, or you, will encounter it are high. 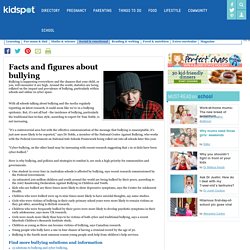 Around the world, statistics are being collated on the impact and prevalence of bullying, particularly within schools and online in cyber space. With all schools talking about bullying and the media regularly reporting on latest research, it could seem like we're in a bullying epidemic. But, it's not all bad - the incidence of bullying, particularly the traditional face-to-face style, according to expert Dr Toni Noble, is not increasing. "It's a controversial area but with the effective communication of the message that bullying is unacceptable, it's just now more likely to be reported," says Dr Noble, a member of the National Centre Against Bullying, who works with the Federal Government on National Safe Schools Framework being rolled out into all schools later this year.

Did you know? - Facts about bullying - Teachers - Bullying. No Way! Approximately one in four Year 4 to Year 9 Australian students (27%) report being bullied every few weeks or more often (considered to be frequent) during the last term at school.Frequent school bullying was highest among Year 5 (32%) and Year 8 (29%) students.83% of students who bully others online, also bully others offline.84% of students who were bullied online were also bullied offline.Peers are present as onlookers in 87% of bullying interactions, and play a central role in the bullying process.Hurtful teasing was the most prevalent of all bullying behaviours experienced by students, followed by having hurtful lies told about them.Online bullying appears to be related to age (or access to technology), with older students more likely to engage in cyber bullying than younger students. 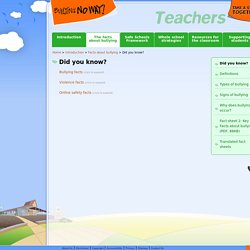 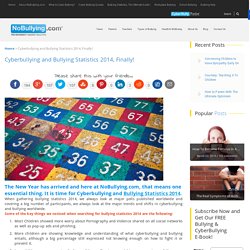 It is time for Cyberbullying and Bullying Statistics 2014. When gathering bullying statistics 2014, we always look at major polls published worldwide and covering a big number of participants, we always look at the major trends and shifts in cyberbullying and bullying worldwide.Some of the key things we noticed when searching for bullying statistics 2014 are the following: Most Children showed more worry about Pornography and Violence shared on all social networks as well as pop-up ads and phishing.More children are showing knowledge and understanding of what cyberbullying and bullying entails, although a big percentage still expressed not knowing enough on how to fight it or prevent it.Less children are expressing feelings of low self esteem and bigger percentage of them are expressing the desire to remain survivors and winners in the battle against bullying and cyberbullying. 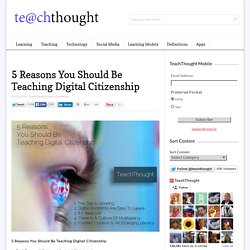 Anonymous sources had posted a “questionable”–and NSFW–list for multiple public schools in our city on Instagram, leading to distraught girls, viral Twitter reactions, and an investigation. This type of cyberbullying and reckless use of digital communication is rampant among teens, but this recent episode was only unusually due to its elevated publicity. Every day, I see a student deficit on how to mindfully employ the unbridled potential and power of their smartphones and other digital tools. Is it those cruel sources who exploit the images? Is it parents who purchase smartphones and laptops for their children and fail to set boundaries or teach their kids about responsible use?

Is it the lack of education and discussion in schools about the ways students can be more mindful, responsible users of technology? A combination, of course. PROJECT ROCKIT.