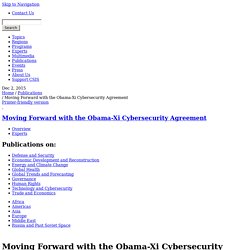 The agreement on cybersecurity between President Xi and Obama is a first step in defining it. The agreement does not mean we are done with cybersecurity. It is the start of a long journey to define both cyberspace and the larger relationship. Serious discussions on how to respond to China’s cyber espionage began several years ago. A strategy that combined pressure and accommodation seemed the best alternative to passivity, and U.S. concerns were raised many times, including in a December 2013 non-paper given to Chinese officials that discussed sanctions, indictments and other measures if matters did not improve.

U.S.-China Cybersecurity Relations: Understanding China’s Current Environment. (Image © Jing de Jong-Chen) How do the United States and China move away from the mistrust that currently governs their relationship on cybersecurity issues? 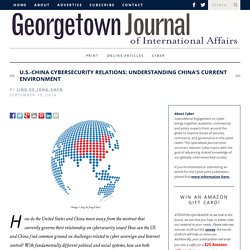 How can the US and China find common ground on challenges related to cyber sovereign and Internet control? With fundamentally different political and social systems, how can both countries balance their national security interests to protect global cyber infrastructure? This article introduces new perspectives on the U.S. -China cyber environment with a focus on China’s growing hacking economy, and government information security management practices. The fascinating truth behind all those ‘great firewall of China’ headlines. Can China Conquer the Internet? In September 2014, Chinese e-commerce giant Alibaba raised $25 billion in the world’s biggest-ever initial public offering. 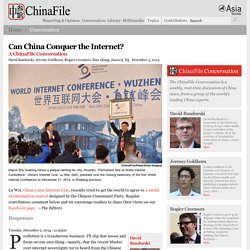 Since then, millions of investors and managers worldwide have pondered a fundamental question: What’s really going on with the new wave of China’s disruptors? Alibaba wasn’t an outlier—it’s one of a rising tide of thriving Chinese companies, mostly but not exclusively in the technology sector. Overnight, its founder, Jack Ma, appeared on the same magazine covers as American entrepreneurial icons like Mark Zuckerberg. Ma was quickly followed by the founders of other previously little-known companies, such as Baidu, Tencent, and Xiaomi.Over the past two decades, an unprecedented burst of entrepreneurialism has transformed China’s economy from a closed, impoverished, state-run system into a major power in global business. Evolution of Internet in China. On September 20, 1987, Professor Qian Tianbai sent China's first E-mail titled "Crossing the Great Wall to Join the World," marking the beginning of the use of Internet by Chinese. 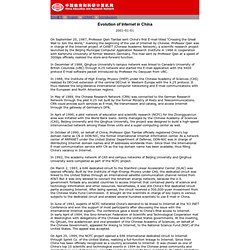 Professor Qian was in charge of the Internet project of CANET (Chinese Academic Network), a scientific research project launched by the Beijing Municipal Computer Application Research Institute in 1986 in cooperation with Karlsruhe University of former Western Germany. The mail sent by Professor Qian at a speed of 300bps officially realized the store-and-forward function. In December of 1988, Qinghua University's campus network was linked to Canada's University of British Columbia (UBC) through X.25 network and started the E-mail application with the X400 protocol E-mail software packet introduced by Professor Hu Daoyuan from UBC. Chinese internet: 'a new censorship campaign has commenced' On 9 May, I posted the following message on Sina Weibo: "The account you have been managing for years can be deleted in a second. Then you try to plot its reincarnation by writing every word from scratch.

The house you have been building all your life can be bulldozed in a moment. China Cyberspies Outwit U.S. Stealing Military Secrets. Among defense contractors, QinetiQ North America (QQ/) is known for spy-world connections and an eye- popping product line. 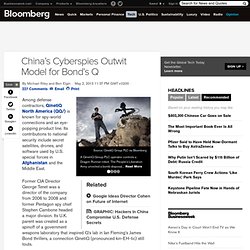 Its contributions to national security include secret satellites, drones, and software used by U.S. special forces in Afghanistan and the Middle East. Former CIA Director George Tenet was a director of the company from 2006 to 2008 and former Pentagon spy chief Stephen Cambone headed a major division. Its U.K. parent was created as a spinoff of a government weapons laboratory that inspired Q’s lab in Ian Fleming’s James Bond thrillers, a connection QinetiQ (pronounced kin-EH-tic) still touts. China proposes cyber security talks with U.S. 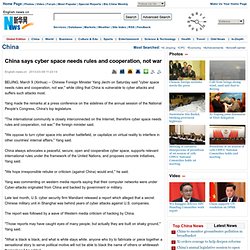 Yang made the remarks at a press conference on the sidelines of the annual session of the National People's Congress, China's top legislature. "The international community is closely interconnected on the Internet, therefore cyber space needs rules and cooperation, not war," the foreign minister said. "We oppose to turn cyber space into another battlefield, or capitalize on virtual reality to interfere in other countries' internal affairs," Yang said. China always advocates a peaceful, secure, open and cooperative cyber space, supports relevant international rules under the framework of the United Nations, and proposes concrete initiatives, Yang said.

"We hope irresponsible rebuke or criticism (against China) would end," he said. China loses US$46B to cybercrime in 2012. Online crimes such as fraud and personal information theft have cost China 289 billion yuan (US$46.4 billion) in 2012, but the lack of legal support makes it tough for local authorities to reduce the losses. 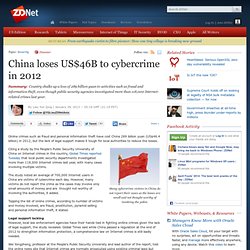 Citing a study by the People's Public Security University of China on Internet crimes in the country, Global Times reported Tuesday that local public security departments investigated more than 118,000 Internet crimes last year, with many cases involving multiple victims. The study noted an average of 700,000 Internet users in China are victims of cybercrime each day.

However, many victims do not report the crime as the cases may involve only small amounts of money and are thought not worthy of involving the authorities, it added. Topping the list of online crimes, according to number of victims and money involved, are fraud, prostitution, pyramid selling and personal information theft, it stated.