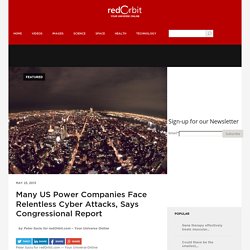 Congressmen Edward Markey of Massachusetts and Henry Waxman of California disclosed their findings during a House Energy and Commerce Committee hearing on cyber security. The two Democratic representatives issues the survey of utility companies, which revealed that the nation´s electrical grid faces continual assaults from hackers, with one power company reporting more than 10,000 attempted cyber attacks per month. “The last few years have seen the threat of a crippling cyber-attack against the US electric grid increase significantly. 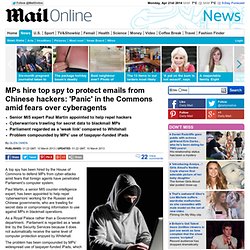 North Korea hackers suspected after major computer crash in the South - Asia - World. Screens went blank promptly at 2 pm (0500 GMT), with skulls popping up on the screens of some computers — a strong indication that hackers planted a malicious code in South Korean systems, the state-run Korea Information Security Agency said. 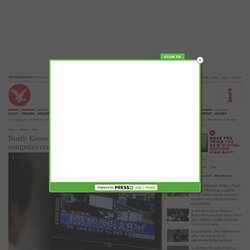 Some computers started to get back online more than 2 hours later. Police and South Korean officials investigating the shutdown said the cause was not immediately clear. But speculation centered on North Korea, with experts saying a cyberattack orchestrated by Pyongyang was likely to blame. The shutdown comes amid rising rhetoric and threats of attack from Pyongyang in response to U.N. punishment for its December rocket launch and February nuclear test. Washington also expanded sanctions against North Korea this month in a bid to cripple the regime's ability to develop its nuclear program. North Korea has threatened revenge for the sanctions and for ongoing routine US-South Korean military drills it considers invasion preparation.

Alleged hacker caught on camera by cyber-security experts who infect his computer with HIS OWN virus. Georgian experts were investigating botnet that infected their computersInfection spread to government agencies and NGOs in several countriesIn a comprehensive report they link hack attacks to Russian intelligence By Damien Gayle Published: 12:51 GMT, 31 October 2012 | Updated: 12:51 GMT, 31 October 2012. 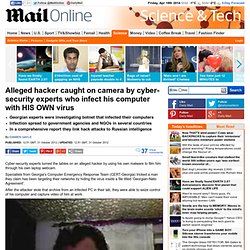 Hacker allegedly behind advanced espionage campaign caught on film. Researchers with the Computer Emergency Response Team in the country of Georgia say they turned the tables on a hacker who planted advanced espionage malware on Georgian and American computers to collect sensitive security documents. 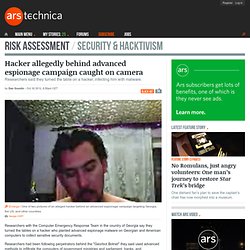 Researchers had been following perpetrators behind the "Georbot Botnet" they said used advanced methods to infiltrate the computers of government ministries and parliament, banks, and non-governmental organizations. The Botnet's targets spanned Georgia, the US, Canada, Ukraine, France, and other countries. Besides exploiting unpublished software vulnerabilities to install malware, the attackers also planted malicious links on specific webpages that would interest the kinds of people being targeted. Darpa Looks to Make Cyber War Routine With Secret 'Plan X' Col. 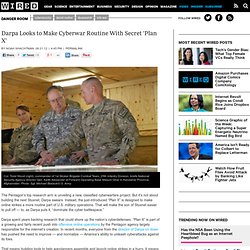 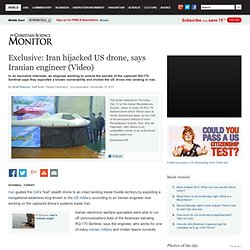 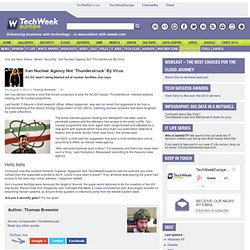 Last month, F-Secure’s chief research officer, Mikko Hypponen, was sent an email that appeared to be from a scientist working at the Atomic Energy Organization of Iran (AEOI), claiming nuclear systems had been targeted by cyber attackers. The email claimed popular hacking tool Metasploit had been used to penetrate systems and the attackers had access to the body’s VPN. “Our nuclear programme has once again been compromised and attacked by a new worm with exploits which have shut down our automation network at Natanz and another facility Fordo near Qom,” the sender said.

Yet AEOI ‘s chief said the suggestion that such a virus existed was untrue, according to ISNA, an Iranian news agency. Five Year Cyber Attack On US And UN Revealed. The US and other governments, and international bodies such as the UN, have been under the largest co-ordinated cyber attack ever discov ered, lasting at least five years, according to security firm McAfee. 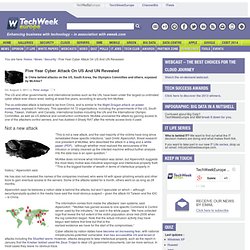 The co-ordinated attack is believed to be from China, and is similar to the Night Dragon attack on power companies, exposed in February. This operation hit 72 organisations, including the governments of the US, South Korea, Tiawan, Vietnam and Canada, international bodies including the UN and the International Olympic Committee, as well as US defence and construction contractors. McAfee uncovered the attack by gaining access to one of the attackers control servers, and has dubbed it Shady RAT after the remote access tools it used.

He has also not revealed the names of the companies involved, who were hit with spear-phishing emails and other tools to gain eventual access to the servers. Some of the attacks lasted for a month, others went on as long as 28 months. Online Banking Attacks Were Work of Iran, U.S. Officials Say. Government Admits Building Cyber-Weapons. The British government has acknowledged it has begun work on a “toolbox” of offensive cyber-weapons to complement its existing defensive capabilities. 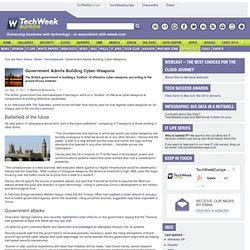 In an interview with The Guardian, armed forces minister Nick Harvey said he now regards cyber-weapons as “an integral part of the country’s armoury”. Battlefield of the future He said action in cyberspace would form “part of the future battlefield”, comparing ICT weapons to those existing in other forms. “The circumstances and manner in which we would use (cyber weapons) are broadly analogous to what we would do in any other domain,” Harvey told the paper. “Cyber is a new domain but the rules and norms, the logic and the standards that operate in any other domain… translate across into cyberspace.” Internet 'slows down worldwide' after Dutch cyber-attack on spam-fighting firm. SpamHaus group under attack from cyber-vandals in GenevaBut other unconnected sites across the world have been caught in attackNow, emails have slowed down as a result, expert claims Published: 15:19 GMT, 27 March 2013 | Updated: 23:41 GMT, 28 March 2013. Spy agencies unite to fight cyber-crime with new 'Facebook to attack internet terrorists'

UK networks are often attacked by other states and those seeking secrets Now secret services and business will team up to prepare against attackDozen analysts will monitor threat, based at a secret location in London By Amanda Williams Published: 11:38 GMT, 27 March 2013 | Updated: 12:40 GMT, 27 March 2013 Cabinet Office minister Francis Maude said cyber attacks are happening on an industrial scale Britain’s intelligence agencies are today launching a Facebook-style site to share information in a bid to combat a growing terrorist threat. UK networks are often attacked by other states, criminals and companies seeking secrets, costing billions of pounds. Now, experts from government communications body GCHQ, MI5, police and business will work together on a new partnership designed to defend industry and government against attack.