This Week at War: Lessons from Cyberwar I - By Robert Haddick. What does cyberwar look like? 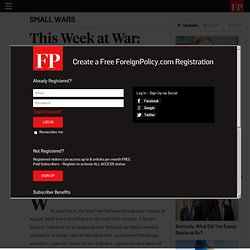 In 2008, Georgia found out. In most ways, the brief war between Russia and Georgia in August 2008 was a throwback to the mid-20th century. A border dispute, inflamed by propaganda and whipped-up ethnic tension, resulted in a murky case of who-shot-first, an armored blitzkrieg, airstrikes, a plea for peace by the defeated, signatures on a piece of paper, and the winner's annexation of some territory. So far, so 1939. But one aspect of this little war was very much in the 21st century, namely Russia's integration of offensive cyber operations into its overall political-military strategy. In a new piece for Small Wars Journal, David Hollis, a senior policy analyst with the Office of the Undersecretary of Defense for Intelligence and a reserve Army officer at U.S. According to Hollis, Russian offensive cyber operations began several weeks before the outbreak of the more familiar kinetic operations.

If sanctions aren't working, what then? Cyberwar? What Cyberwar? Ladies and Gentlemen, put down the keyboards, stop reading the screen for a moment, and take a deep breath. 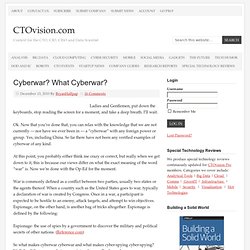 I’ll wait. Ok. Now that you’ve done that, you can relax with the knowledge that we are not currently — nor have we ever been in — a “cyberwar” with any foreign power or group. Yes, including China. So far there have not been any verified examples of cyberwar of any kind. At this point, you probably either think me crazy or correct, but really when we get down to it, this is because our views differ on what the exact meaning of the word “war” is.

War is commonly defined as a conflict between two parties, usually two states or the agents thereof. Espionage: the use of spies by a government to discover the military and political secrets of other nations. So what makes cyberwar cyberwar and what makes cyber-spying cyber-spying? Does stealing plans for a fighter jet constitute an act of war? These acts are all acts of espionage. South Ossetia: The First Cyber/Physical War? - loose wire blog. BBC picture So far the attacks have been by Georgian supporters on two Ossetian media sites, and attacks by supporters of South Ossetia on the Georgian National Bank website and the Georgian Ministry of Foreign Affairs (which was reportedly splashed with a collage of of Saakashvili and Hitler photos.) 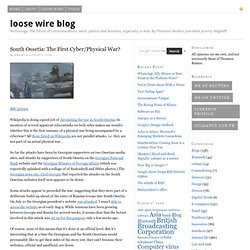 The Georgian news site, Civil Georgia that reported the attacks on the South Ossetian websites itself now appears to be down. Georgia Under Online Assault. RBN - Georgia CyberWarfare. RBN (Russian Business Network) now nationalized, invades Georgia Cyber Space Sat – 2008 08 09 5:00 EST (click on figs for larger size) As requested by community relay, the following is a report on the cyber war underway in parallel with conventional warfare. 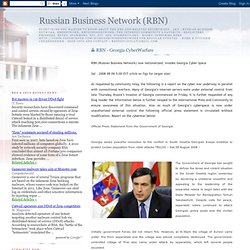 Many of Georgia’s internet servers were under external control from late Thursday, Russia’s invasion of Georgia commenced on Friday. It is further requested of any blog reader the information below is further relayed to the International Press and Community to ensure awareness of this situation. Also as much of Georgia’s cyberspace is now under unauthorized external control the following official press statement is circulated without modification. Official Press Statement from the Government of Georgia Georgia seeks peaceful resolution to the conflict in South Ossetia Georgian troops mobilize to protect civilian population from rebel attacks TBILISI – Sat 09 August 2008 – Initially government forces did not return fire. 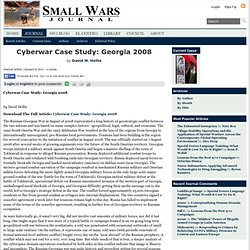 The 1992 South Ossetia War and the 1993 Abkhazian War resulted in the loss of the regions from Georgia to internationally unrecognized, pro-Russian local governments. Tensions had been building in the region for several years prior-to the initiation of conflict in August 2008. As wars historically go, it wasn't very big, did not involve vast amounts of military forces, nor did it last long. David M. Cyberattacks during the 2008 South Ossetia war. Details[edit] Analysis[edit] While Day.az claimed that Russian intelligence services conducted the denial-of-service attacks (DDoS) on Georgian informational and governmental websites through a proxy in this period,[5] the Russian government denied the allegations, stating that it was possible that individuals in Russia or elsewhere had taken it upon themselves to start the attacks.[4] Others[who?] 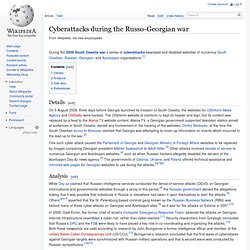 Asserted that the St. Petersburg-based criminal gang known as the Russian Business Network (RBN) was behind many of these cyber attacks on Georgian and Azerbaijani sites,[9] as it was for the attacks on Estonia in 2007.[10] See also[edit] References[edit]