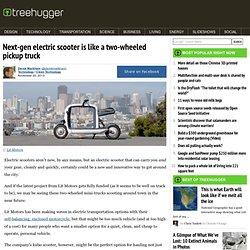 And if the latest project from Lit Motors gets fully funded (as it seems to be well on track to be), we may be seeing these two-wheeled mini-trucks scooting around town in the near future. Lit Motors has been making waves in electric transportation options with their self-balancing, enclosed motorcycle, but that might be too much vehicle (and at too high of a cost) for many people who want a smaller option for a quiet, clean, and cheap to operate, personal vehicle. The company's kubo scooter, however, might be the perfect option for hauling not just ourselves around, but also all of our gear or groceries, without having to fit it all in a backpack.

Designed and built as a side project, the idea for the kubo came about because they "couldn't find a good quality electric scooter anywhere". SIM-Drive – All EVs With In-Wheel Motors Showcased Under One Roof (w/videos) 4 months ago by Mark Kane EVs with SIM-Drive technology At the recent Tokyo Motor Show, Japanese company SIM-Drive showed off all the EVs that utilize its technology. 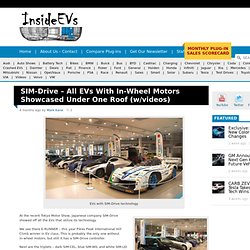 VW And Protean Team Up For In-Wheel Electric Motors. Protean in-wheel electric motor As electric cars become more prevalent in the market place, many automakers are still exploring the best way to make use of electric drivetrains. 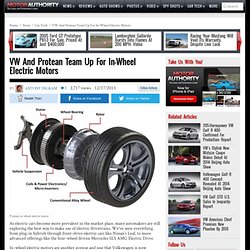 We've seen everything from plug-in hybrids through front-drive electric cars like Nissan's Leaf, to more advanced offerings like the four-wheel driven Mercedes SLS AMG Electric Drive. In-wheel electric motors are another avenue and one that Volkswagen is now exploring, teaming up with specialists in the field, Protean. Protean has been developing in-wheel motors for several years now, demonstrating its wares on vehicles like the BRABUS Technology Project Hybrid and announcing a production electric in-wheel motor earlier this year. In the latest venture, says Green Car Reports, Protean and FAW-Volkswagen--a Chinese arm of VW--will develop a rear-wheel drivetrain for a new electric Bora compact sedan. 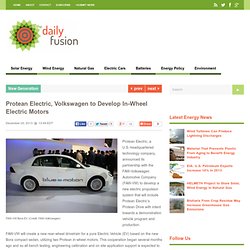 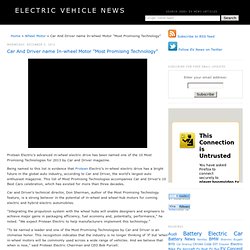 Being named to this list is evidence that Protean Electric's in-wheel electric drive has a bright future in the global auto industry, according to Car and Driver, the world's largest auto enthusiast magazine. This list of Most Promising Technologies accompanies Car and Driver's 10 Best Cars celebration, which has existed for more than three decades. Protean Improves In-Wheel Electric Vehicle Motor - EVWORLD.COM. PHOTO CAPTION: Close up, cutaway view of Proteam Drive in-wheel electric drive motor. 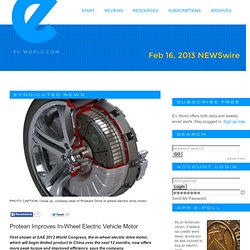 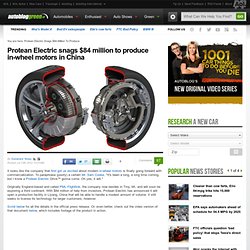 This capital will be used to bring Protean's breakthrough electric drive technology to production by establishing manufacturing facilities in Liyang. The funding is led by GSR Ventures, a venture capital firm based in Beijing and Silicon Valley. They will be joined by the New Times Group, a Liyang-based industrial group. This marks Protean Electric's entry into China, the world's largest automobile market. A Different BMW: The Concept Active Tourer Plug-in Hybrid. BMW Concept Active Tourer The world has never seen a BMW like this one.

It has a three-cylinder engine mounted transversely. It's a plug-in hybrid. And it's a people mover! Roding Roadster: la versione elettrica di Siemens. Roding Roadster Electric: Siemens Creates Newest Electric Car To Watch. Electric cars have been around for ages but it’s only in recent years when the technology has been refined to become quite viable for the future. 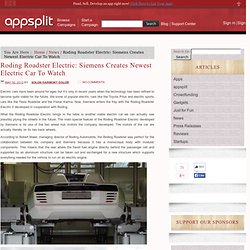 Chinese Cash Props Up Fledgling U.S. EV Company. Protean wants to revolutionize electric propulsion with its unique hub-mounted, or in-wheel, electric motors. Investors from China and Silicon Valley combined Wednesday to raise $84-million for a Detroit-based startup, Protean Electric Inc., which has developed technology to propel cars and trucks using motors mounted directly inside a vehicle’s wheels. Protean, which bills itself as a clean technology firm, is considered a leader in so-called hub motor electric drive systems and the new capital will be used to bring the company’s technology to production by establishing manufacturing facilities in Liyang, China, executive said.

Your News Source! “With this round of investment in place, Protean Electric is now positioned to move aggressively to production and into the market,” said Bob Purcell, chairman and chief executive officer of Protean Holdings Corp. Plug-In Kit Turns Any Car Into a Hybrid for $3,000. Students from the Middle Tennessee State University (MTSU) have developed a plug-in hybrid retrofit kit. 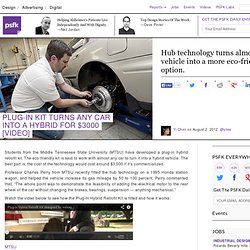 The eco-friendly kit is said to work with almost any car to turn it into a hybrid vehicle. The best part is, the cost of the technology would cost around $3,000 if it’s commercialized. Professor Charles Perry from MTSU recently fitted the hub technology on a 1995 Honda station wagon, and helped the vehicle increase its gas mileage by 50 to 100 percent. Perry commented that, “The whole point was to demonstrate the feasibility of adding the electrical motor to the rear wheel of the car without changing the brakes, bearings, suspension — anything mechanical.” Watch the video below to see how the Plug-In Hybrid Retrofit Kit is fitted and how it works: Plug-In Hybrid Retrofit Kit Could Greatly Improve Gas Millage For Only $3000. From Earth Techling's Nino Marchetti: The bright minds of young college students and their mentors are at work again in the world of green technology. This time around the scene is Middle Tennessee State University (MTSU) and the item being developed is a plug-in hybrid retrofit kit said to work with almost any car.

Professor Charles Perry and a rotating group of MTSU students associated with the university’s Department of Engineering Technology have, for the last few years, been developing a wheel hub, plug-in hybrid retrofit kit. This green car technology, currently in proof of concept stage, is now being shopped around to private investors for funding to demonstrate a manufacturing version of it. Perry’s wheel hub technology, according to MTSU, was recently outfitted on a 1994 Honda station wagon and helped this research vehicle to see a gas mileage increase anywhere from 50 to 100 percent. Plug-in Hybrid Retrofit Kit (Revised) Michigan Company Develops In-Wheel Electric Motor.

(Source: cleanfuelconnectionnews.com) Pre-production starts in early 2013 while full commercial production is set to begin in early 2014 A Michigan technology company has developed what could possibly be a new feature for electric vehicles (EVs) -- in-wheel electric motors . Protean Electric, a Michigan-based tech company, is on its way to producing compact wheels for EVs that have electric motors inside of them instead of using conventional systems, which utilize larger motors to power a transmission or axles in order to move the wheels. The in-wheel motors weigh 68 pounds and are 18 inches in diameter.

They offer 110 HP and 598 lb-ft of torque. The motors' anatomy consists of a permanent magnet at the center and the rotor on the outside for easy attachment to the wheels. Electric SLS: High-voltage performer - IOL Motoring. Wheel-selective all-wheel drive allows the car to deliver maximum torque to the wheels with the most grip. Related Stories Paris Motor Show - It could only have come from Affalterbach: the world's fastest, most brutal electric car and the most powerful AMG yet. NTN-SNR's in-wheel motor system wins global Innovation Award. A compact, in-wheel electric motor drive system came out top in the prestigious Innovation Awards contest at the recent Automechanika trade fair for the automotive after-market in Frankfurt.

The system is the work of NTN-SNR, a French company which is a member of the Japan-based NTN group that is one of the world's largest bearing makers. NTN-SNR makes components such as drive shafts and bearings with built-in sensors for conventional petrol and diesel-engined vehicles, but its main thrust for the future is in the realm of electric vehicles. The ability to control power to each wheel independently makes it relatively easy to use the in-wheel motors as an innovative vehicle stability control system too.

According to a new report from Pike Research, annual sales of electric two-wheel vehicles will reach 65.5 million units in the Asia Pacific region by 2018, resulting in a cumulative total of almost 382 million sales from 2012 to 2018. Two-wheel electric vehicles including scooters, motorcycles, and bicycles are a popular mode of transport in China, India, and most Association of Southeast Asian Nations (ASEAN) countries, due to their fuel efficiency and ease of use in congested traffic. The growth of the overall market for these vehicles within Asia Pacific is also leading to strong expansion of the electric two-wheel vehicle industry in the region, with adoption being driven by rapid urbanization and increasing household incomes.

Toyota Supra successor could be hybrid. People are talking about a successor for the legendary Toyota Supra for quite some time now. That car has been up and down for so many times that we have lost count! And now, new rumors suggest that the car is back in the pipeline and that it could arrive in showrooms by late 2015 for less than $60,000.

Michelin’s Active Wheel Technology shifts entire drivetrain to the driving wheel. We all are so far driving a car with clutch, gearbox, transmission shaft… and there are differential or shock absorbers and so on. How about driving a car that has none of these components where they usually are, but confined to a single ground braking unit: Tires. We all have heard of Michelin’s Active Wheel technology, but the company now claims to have reinvented the wheel to incorporate tyre, braking system, motorization and suspension. SIM-Drive launch new SIM-WIL model with 351 km EV range. New SIM-WIL electric prototype has 218 mile range, in-wheel motors [w/video] Protean Electric showcasing in-wheel drive system in BRABUS Hybrid at SAE World Congress.

The FF revealed to the world - Svelata la nuova FFour.