WheelTug turns jets into electric hybrids. WheelTug, a company based in Gibraltar, has developed tech that reduces an airplane's fuel costs, cuts emissions and even helps prevent delays. 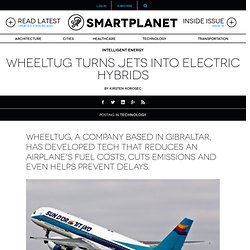 WheelTug has developed tech that temporarily turns airplanes into electric hybrids, helping to save fuel, cut emissions and help keep arrivals and departures on time. And it might soon be found in El Al Israel Airlines' Boeing 737s. Agreement: Alitalia - WheelTug to Introduce Electric Drive System for Aircraft Taxi. WheelTug Wins El Al as First Airline Client for Electric Taxiing. WheelTug, a privately held company that has developed electric motors to move aircraft on the ground as a fuel-saving measure, said it signed El Al Israel Airlines as its first customer. 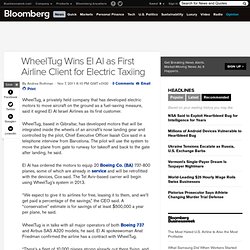 WheelTug, based in Gibraltar, has developed motors that will be integrated inside the wheels of an aircraft’s nose landing gear and controlled by the pilot, Chief Executive Officer Isaiah Cox said in a telephone interview from Barcelona. 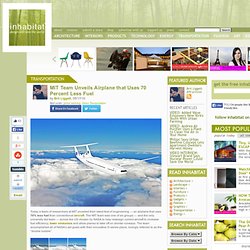 The MIT team was one of six groups — and the only university led team — across the US chosen by NASA to help redesign current aircraft to increase fuel efficiency, lower emissions and allow planes to take off on shorter runways. The team accomplished all of NASA’s set goals with their innovative D-series plane, lovingly referred to as the “double bubble”. MIT also unveiled its “hybrid wing body” H-series, which is intended to replace 777 class aircraft NASA is calling this government-funded initiative the “N+3″, signifying that the planes are meant to revolutionize the aircraft industry in three generations.

MIT designed their D-series as a 180 passenger aircraft meant to replace the domestic 737 market. Electric Airplane. Being Led By The Nose. With speculation in CAFE circles about the use of thin, lightweight motors now available for landing and takeoff augmentation, it comes as almost now surprise that DLR, the German Aerospace Centre, and the Airbus people at EADS have announced development of an electric nose wheel that could replace airport tugs and extended ground operation for airliners’ jet engines. 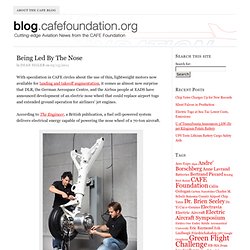 According to The Engineer, a British publication, a fuel cell-powered system delivers electrical energy capable of powering the nose wheel of a 70-ton aircraft. DLR technicians ready twin nose wheel motors on A320 landing gear “Commercial aircraft could cut their on-ground emissions by one quarter with a new hydrogen fuel-cell propulsion system, according to its creators. “For short-haul aircraft that often take off and land seven times a day, this could save between 200 and 400 litres of kerosene per day while reducing noise by around 95 per cent, without the use of towing vehicles.” Electric Motors for Slashing Airline Costs. Gibraltar-based WheelTug says that electric motors in the nose wheels of jetliners can allow them to move using neither main engines nor tugs, and can save airlines the equivalent of 6 to 7% of their fuel use. 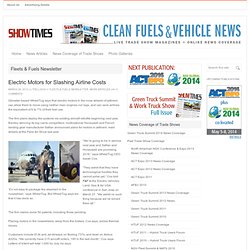 The firm plans deploy the systems via existing aircraft retrofits beginning next year, thereby skinning its big-name competitors: multinational Honeywell and French landing gear manufacturer Safran announced plans for motors in jetliners’ main wheels at the Paris Air Show last year. ‘It’s not easy to package the elephant in the nosewheel,’ says WheelTug. But WheelTug says too that it has done so. “We’re going to be in service next year and Safran and Honeywell are promising 2016,” says WheelTug CEO Isaiah Cox. “They admit that they have technological hurdles they cannot solve yet,” Cox told F&F at the Electric Vehicles Land, Sea & Air USA conference in San Jose on March 27. The firm claims some 50 patents, including those pending. The up-front cost to carriers? Israir Airlines Announces a Letter of Intent on Option to Equip Its A320 Fleet With WheelTug Aircraft Drive System. 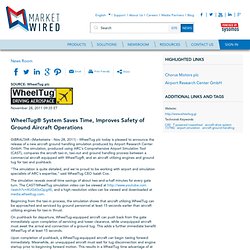 The simulation, produced using ARC's Comprehensive Airport Simulation Tool (CAST), compares the aircraft taxi-in, taxi-out and ground handling process between a commercial aircraft equipped with WheelTug®, and an aircraft utilizing engines and ground tug for taxi and pushback. "The simulation is quite detailed, and we're proud to be working with airport and simulation specialists of ARC's expertise," said WheelTug CEO Isaiah Cox. Jet Airways letter of intent for WheelTug aircraft drive system.

Posted by- Neelam Mathews March 9, 2012 Jet Airways and Gibraltar-based WheelTug have signed a Letter of Intent under which Jet Airways, subject to all financial, technical and operational feasibility checks and necessary regulatory approvals, has the right to lease WheelTug Aircraft Drive Systems for installation on its Boeing 737NG aircraft The WheelTug electric drive system uses high-performance electric motors, installed in the nose gear wheels of an aircraft, to provide full mobility while on the ground, without the use of the aircraft's jet engines or tugs for both pushback and taxi operations, says a statement Current commercial aviation practice utilizes a tug for aircraft gate pushback, while forward taxi is powered by the aircraft’s engines. 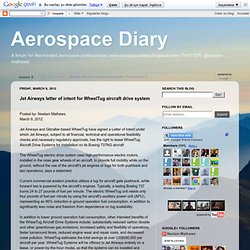 Typically, a taxiing Boeing 737 burns 24 to 27 pounds of fuel per minute. A greener future for the aviation industry. Written by Jonny Williamson As an industry, global aviation contributes almost 650 million tonnes of carbon dioxide to the atmosphere every year, two percent of the total man-made CO2 emissions. 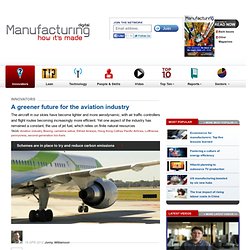 If the aviation industry were a country, astoundingly it would be ranked as number 21 in terms of GDP, with an estimated global economic impact of US$425 billion. With a growth of five percent year on year, the industry has been under mounting governmental and public pressure to reconsider the long-term environmental impacts of its business. (Figures from Air Transport Action Group, ATAG) Air Traffic Management - ATM and CMS Industry online, the latest air traffic control industry, CAA, ANSP, SESAR and NEXTGEN news, events, supplier directory and magazine.

Alitalia and WheelTug are to collaborate on developing an innovative electric drive system for taxiing the Airbus A320 family of aircraft. 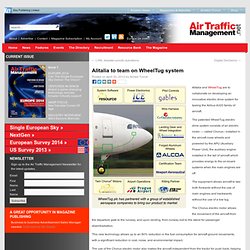 The patented WheelTug electric drive system consists of an electric motor — called Chorus– installed in the aircraft nose wheels and powered by the APU (Auxiliary Power Unit), the auxiliary engine installed in the tail of aircraft which provides energy to the on-board systems when the main engines are off. The equipment allows aircraft to taxi both forwards without the use of main engines and backwards without the use of a tow tug.

The Chorus electric motor allows the movement of the aircraft from the departure gate to the runway, and upon landing, from runway exit to the stand for passenger disembarkation. This new technology allows up to an 80% reduction in the fuel consumption for aircraft ground movements, with a significant reduction in cost, noise, and environmental impact. Electric nose wheel could reduce aircraft emissions. 10 February 2011 | By Stephen Harris A fuel cell system delivers electrical energy capable of powering the nose wheel of a 70-ton aircraft. 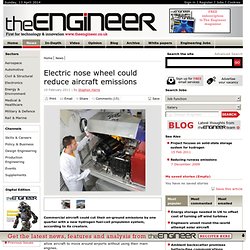 Commercial aircraft could cut their on-ground emissions by one quarter with a new hydrogen fuel-cell propulsion system, according to its creators. Researchers at the German Aerospace Centre (DLR) supported by Airbus and Lufthansa have developed an electric nose wheel that could allow aircraft to move around airports without using their main engines. For short-haul aircraft that often take off and land seven times a day, this could save between 200 and 400 litres of kerosene per day while reducing noise by around 95 per cent, without the use of towing vehicles. Several Groups Now Testing Electric Taxiing. It must at least seem like a good idea, because three different enterprises are taxi testing Airbuses with electric landing gear wheels meant to replace the large “tugs” that can be seen every day at airports around the world pushing jet airliners away from their boarding ramps.

In current normal practice, the jets, with their engines at idle, are pushed onto a taxiway, at which point the tug disengages and the jet throttles up to begin the usually long taxi to a waiting runway. Safran and Honeywell electric main gear on Airbus A-320 Quirkily capitalized easyJet, the United Kingdom’s largest airline, is working with Honeywell and Safran to develop and test their version of this new technology, which they label the electric green taxiing system (EGTS). WheelTug 'Front-Wheel Drive' for Airplanes Improves Aviation Ground Operations. PARIS--(Marketwire - Jun 20, 2011) - The revolutionary onboard electrical drive system for aircraft being developed by WheelTug plc has stimulated aerospace industry efforts to revamp ground operations.