8 Bad Habits that Crush Your Creativity And Stifle Your Success 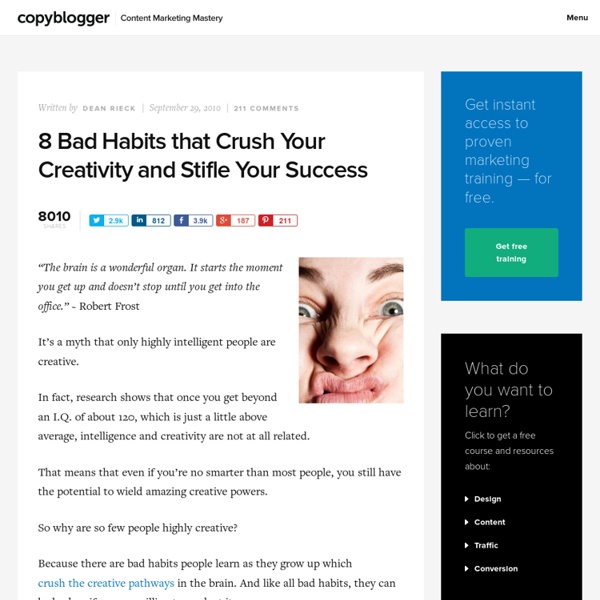 13 Free Design Tools for Visual Marketers on a Budget They say you shouldn't judge a book by its cover, but let's be honest ... a pretty cover doesn’t hurt when it comes to your marketing. That’s why -- whether you're creating lead generation content, social media content, calls-to-action, or infographics -- your marketing materials should always be as visually appealing as possible. Problem is, actually creating all these beautiful visuals isn't exactly every marketer's forte. Oh, another problem? But there's good news -- there are plenty of free and easy-to-use tools out there that can make you look like a master designer. Free Color Tools Even though it may seem like we have an unhealthy obsession with orange, we promise we’re equal opportunity color enthusiasts at HubSpot. 1) Adobe Color CC 2) Design-Seeds Warning: You could get lost browsing this site for hours since there are lots of food, puppy, and kitten pictures. 3) Image Color Picker 4) Paletton Paletton is similar to the aforementioned color tools. 5) COLOURLovers 6) Oto255 15) Skitch

11 Plot Pitfalls - And How to Rescue Your Story From Them We’ve all been there: basking in the glow of a finished manuscript, only to read it over and realize something is wrong with the plot. Finding ourselves unable to identify the problem only makes matters worse. But take heart! Here are some common plot gaffes and sensible ways to revise without starting over. 1. 2. 5. “Why does she do that? 7. 8. Only subplots that are so vital that you could not remove them without destroying your novel get to stick around. Something about these scenes tricked you the first time. 10. See where you might make the stakes higher, the characters more emotional, the setting more a part of the overall plot. 11. Not sure if your story structure is strong enough to woo an agent? Become a WD VIP and Save 10%: Get a 1-year pass to WritersMarket.com, a 1-year subscription to Writer’s Digest magazine and 10% off all WritersDigestShop.com orders! You might also like:

Copywriting Tips for Smart Copywriters - Pro Copy Tips Criando patterns de mudancas climaticas 17 June 2010Last updated at 19:03 By Victoria Gill Science reporter, BBC News CO2 could have caused Ice Ages in the Northern Hemisphere to intensify A "global pattern" of change in the Earth's climate began 2.7 million years ago, say scientists. Researchers found that, at this point, temperature patterns in the tropics slipped into step with patterns of Ice Ages in the Northern Hemisphere. They report in the journal Science that atmospheric CO2 could be the "missing link" to explain this global pattern. The findings, they say, reveal a "feedback process" that could have been magnified by greenhouse gases. This loop of feedback could have intensified both the Ice Ages in the Northern Hemisphere, and temperature fluctuations in the tropics. Professor Timothy Herbert from Brown University in Rhode Island, US, led the research. Continue reading the main story “Start Quote This reveals a feedback process that has magnified climate change” End QuoteDr Carrie Lear Cardiff University Ancient greenhouse

» The Many Reasons We Rely Upon Our Clutter Post written by Leo Babauta. Clutter isn’t an easy problem to solve, no matter how many times I might tell you to toss it out, tell you that you don’t need it. A book isn’t just an object with words on it. A jewelry box isn’t just a container. Clothes aren’t just protection from the elements. Each of these inanimate objects means so much more to us. We put our emotions into them. They are our crutches. What are we to do when we discover these crutches? The Roles of Clutter These aren’t all true for every person, but I’ve found they’re very common: 1. New habit: Learn to combat fears with information. 2. New habit: Learn that you don’t need external objects to be attractive or good enough. 3. New habit: Learn to live in the present. 4. New habit: Realize that things aren’t love, and that the love is only in people. 5. New habit: Squash every bit of hope in yourself. 6. New habit: Deal with the problems. 7. New habit: Take one piece, and deal with that. 8. Clutterfree Book & Course

Neil Gaiman | Cool Stuff | Essays | Essays By Neil | Where do you get your ideas? The question authors fear most ... Neil tackles it here. Every profession has its pitfalls. Doctors, for example, are always being asked for free medical advice, lawyers are asked for legal information, morticians are told how interesting a profession that must be and then people change the subject fast. And writers are asked where we get our ideas from. In the beginning, I used to tell people the not very funny answers, the flip ones: 'From the Idea-of-the-Month Club,' I'd say, or 'From a little ideas shop in Bognor Regis,' 'From a dusty old book full of ideas in my basement,' or even 'From Pete Atkins.' Then I got tired of the not very funny answers, and these days I tell people the truth: 'I make them up,' I tell them. People don't like this answer. And of course I'm not. Every published writer has had it - the people who come up to you and tell you that they've Got An Idea. I'm reasonably gracious with these people. The Ideas aren't the hard bit. And eventually one of them asked it.

No Commercial Ideas | Most Interesting and Creative Ideas Mainual. Notebook For Conceptual Ideas An interesting idea of sharing ideas. That’s what comes first to mind when you visit Mainual. We can find many blogs telling us about design ideas and even examples of these ideas. Continue reading … Mainual. Real Birds Tweet On Twitter What does the word “tweet” means? Voldemars Dudums tried to found out that creating the first live Twitter stream made by real birds. And it’s true that sometimes the content on Twitter is not content at all. Hungry Birds on Twitter: @hungry_birds Hungry Birds project: Street Surfing Homer Henard and Nic Lamb scoring mega slabs somewhere up north. My Desk Is 8-Bit I recently found myself wondering what a video game might look like in the form of a stop motion animation. Alex Varanese Shrevatar Combined hero for fans of Shrek and Avatar.

A Brief Rant on the Future of Interaction Design So, here's a Vision Of The Future that's popular right now. It's a lot of this sort of thing. As it happens, designing Future Interfaces For The Future used to be my line of work. My problem is the opposite, really — this vision, from an interaction perspective, is not visionary. This matters, because visions matter. This little rant isn't going to lay out any grand vision or anything. Before we think about how we should interact with our Tools Of The Future, let's consider what a tool is in the first place. I like this definition: A tool addresses human needs by amplifying human capabilities. That is, a tool converts what we can do into what we want to do. In this rant, I'm not going to talk about human needs. And I'm not going to talk about technology. I'm going to talk about that neglected third factor, human capabilities. Take another look at what our Future People are using to interact with their Future Technology: Do you see what everyone is interacting with? That's right! So then.

How to get story ideas for writing fiction By Cliff Daigle Updated December 16, 2014. By far the most common question asked of professional writers is where they get their ideas. We all like to think that brilliant, fully-formed story ideas just pop into the heads of our favourite authors. We imagine that if we could somehow learn their secret technique then we too could crank out bestsellers as effortlessly as they seem to. The truth is that you have more great ideas than you could ever write. Where to Start? Every how-to book on writing will tell you that you need to start with a solid premise, or story idea. Beginning writers believe that creating a work of fiction starts with a single event - a sudden burst of inspiration that pops a fully-formed story idea into their minds. The Secret to Endless Ideas The secret to generating ideas is the same "secret" that solves every writing problem: writing itself. continue reading below our video Play Video But if you don't yet have that great story idea, what do you write about?

Creativity - Pro Copy Tips After more than two decades of technological evolution, creativity isn’t what it used to be. I don’t mean that the pool of creative advertising talent is shrinking. I mean the way creative people go about creating is different. It’s more than exchanging typewriters for computers or art tables for graphic design programs; it’s a complete shift in the creative process. It started when IBM introduced the first affordable desktop personal computer. As desktop units became more accepted in the workplace, other computer manufacturers began churning out armies of clones, with prices always falling and quality always rising. After years of fearing new technology (remember all those “technology gone wrong” and “evil computers take over the world” movies?) Trouble was, most people didn’t understand them or feel comfortable with them, since they were built by technophiles for left-brained people. Then in 1984, everything changed. Read more Are you a slacker? Are you creative or not? Read more Ready?

Your Designers Are Not Artists, and You Need to Stop Thinking That Way As head of HubSpot’s creative and design team, I spend nearly every day acting as the translator between my designers and the rest of the company, particularly executives, marketers, and salespeople, (i.e. those folks whose jobs are often held to more formal or quantitative metrics). Obviously, it should come as no surprise that there is always at least some disconnect between designers and non-designers, especially considering the vast differences in both the day-to-day work and the success metrics of each group. However, having spent the last several years basically being the translator between the two, one thing has really surprised me: the vast majority of non-designers don’t actually understand what a designer’s real role is. Fortunately, this divide usually has nothing at all to do with a lack of appreciation for the work designers do. Artist vs. Before you grimace at that statement, just take a moment to hear me out. Design is first and foremost a job of solving problems. P.S.

What Makes a Good Story? (Tips for Young Authors) Good writers often break rules—but they know they’re doing it! Here are some good rules to know. Theme A theme is something important the story tries to tell us—something that might help us in our own lives. Not every story has a theme, but it’s best if it does. Don’t get too preachy. Plot Plot is most often about a conflict or struggle that the main character goes through. The main character should win or lose at least partly on their own, and not just be rescued by someone or something else. The conflict should get more and more tense or exciting. The basic steps of a plot are: conflict begins, things go right, things go WRONG, final victory (or defeat), and wrap-up. A novel can have several conflicts, but a short story should have only one. Story Structure At the beginning, jump right into the action. Decide about writing the story either in “first person” or in “third person.” Decide about writing either in “present tense” or in “past tense.” Characters Setting Style and Tone