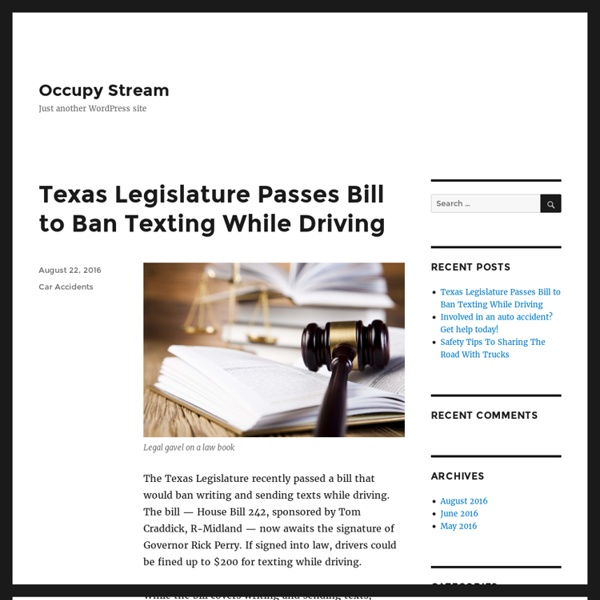 Fast Youtube Views with NO Account Passwords Needed! How To Order Choose a Package Choose your package and click “Add To Basket”. You will be directed to provide your YouTube video URL and continue to checkout. Fill Out Order Form

Occupy Wall Street: Protests in California and around the nation Occupy protestsOn Sept. 17, hundreds of people protested against Wall Street greed in Lower Manhattan and marched up Broadway; about 150 people stayed overnight in Zuccotti Park, a privately owned public space near Wall Street. Since then, while living in the park, the protesters have sponsored rallies and marches on most days — and the movement has thrived. Between 1,000 and 1,500 people have reportedly been arrested in protests across the United States, with the largest numbers in New York, Boston and Chicago. Primer | Timeline Videos

The shocking truth about the crackdown on Occupy US citizens of all political persuasions are still reeling from images of unparallelled police brutality in a coordinated crackdown against peaceful OWS protesters in cities across the nation this past week. An elderly woman was pepper-sprayed in the face; the scene of unresisting, supine students at UC Davis being pepper-sprayed by phalanxes of riot police went viral online; images proliferated of young women – targeted seemingly for their gender – screaming, dragged by the hair by police in riot gear; and the pictures of a young man, stunned and bleeding profusely from the head, emerged in the record of the middle-of-the-night clearing of Zuccotti Park. But just when Americans thought we had the picture – was this crazy police and mayoral overkill, on a municipal level, in many different cities? – the picture darkened. To Europeans, the enormity of this breach may not be obvious at first.

Call Your Mayor: Complete List of Numbers for Occupied Cities On October 13, I started calling Mayor Bloomberg’s office to protest his threatened attack on Zuccotti Park, and urged others to do the same. Apparently they did, mostly without any urging from me, because the high volume of calls from around the country was credited, by the New York Times, with making the mayor back off. The next day, prompted by reports from occupiers, I used Facebook to tell people to call the mayor of San Diego.

NewYorkPost Search Results: occupy News Page Six Sports Mohammed Nabbous 1983-2011 « Louis Abelman Today we received the news that Mohammed Nabbous, a citizen media activist and one of the great figures of the February 17th youth revolutionary movement, was killed by a Qadaffi sniper while covering the first hours of fighting in Benghazi. His death represents a terrible loss for the movement and for the future of Libya. We met Nabbous briefly, soon after arriving in Benghazi. As a leader and a member of the Transitional National Council, he gathered a progressive group of activists around him and organized the institution known as the February 17th Revolution Youth Media Center. In that grimy warren of hallways and former interrogation cells, reclaimed from the regime and plastered floor to ceiling with graffiti slogans and cartoons, his name was intoned gravely, even reverently.

At Occupy Camps, Veterans Bring the Wars Home - Tina Dupuy - Politics Expert at living in tents, some veterans are finding new purpose in the streets We're in a coffee shop near McPherson Square, the location of Occupy DC, and Michael Patterson, 21, and I are having hot cocoa on a cold November night. He's wearing an Iraq Veterans Against the War sweatshirt and baggy shorts. It's freezing outside. "I'm from Alaska," he offers as an explanation.

AnonOps Communications One account. All of Google. Sign in to continue to Blogger Find my account Forgot password? Sign in with a different account Create account The OWS Library: What the Protesters are Reading Taking a step back and examining something as vibrant as the Occupy Wall Street protests is very difficult from a sociological or anthropological standpoint. It is like trying to pick up Jell-O with tweezers. The object of your interest is both amorphous and in a constant state of flux. This is made more challenging by the absence of concrete objectives in the movement itself.

UC cops' use of batons on Occupy camp questioned A debate over the use of police force has reignited at the UC Berkeley campus after videos surfaced showing officers repeatedly shoving and jabbing screaming students who tried to keep officers from dismantling a nascent Occupy encampment. The videos taken by protesters, journalists and casual observers show UC Berkeley police and Alameda County sheriff's deputies in riot gear ordering students with linked arms to leave a grassy area outside the campus administration building Wednesday. When the students didn't move, police lowered their face shields and began hitting the protesters with batons. University police say the students, who chanted "You're beating students" during the incident, were not innocent bystanders, and that the human fence they tried to build around seven tents amounted to a violent stance against police. But many law enforcement experts said Thursday that the officers' tactics appeared to be a severe overreaction. Sgt.

Declaration of the Occupation of New York City This document was accepted by the NYC General Assembly on September 29, 2011 Translations: French , Slovak , Spanish , German , Italian , Arabic , Portuguese [ all translations »] As we gather together in solidarity to express a feeling of mass injustice, we must not lose sight of what brought us together. We write so that all people who feel wronged by the corporate forces of the world can know that we are your allies. As one people, united, we acknowledge the reality: that the future of the human race requires the cooperation of its members; that our system must protect our rights, and upon corruption of that system, it is up to the individuals to protect their own rights, and those of their neighbors; that a democratic government derives its just power from the people, but corporations do not seek consent to extract wealth from the people and the Earth; and that no true democracy is attainable when the process is determined by economic power.

Occupied WSJ - GitHub Suggestions on web strategy and execution for the Occupied Wall Street Journal -prepared by #occupyhack DC The Occupied Wall Street Journal has created a compelling publication that has the opportunity to be a force in American discourse. This effort could be dramatically augmented with a proper web publication and community. This is our best judgement as to how this might be executed. Needs #Occupy Denver# on USTREAM Watch without ads Ustream © Search Log in / Sign up With Facebook (faster) Occupy protests around the world: full list visualised "951 cities in 82 countries" has become the standard definition of the scale of the Occupy protests around the world this weekend, following on from the Occupy Wall Street and Madrid demonstrations that have shaped public debate in the past month. We wanted to list exactly where protests have taken place as part of the Occupy movement - and see exactly what is happening where around the globe. With your help, adding events in our form below, we've been able to show 750 Occupy events world wide. As we wrote this week: Protests inspired by the Occupy Wall Street movement in New York and the "Indignants" in Spain have spread to cities around the world.

Occupy The Web Here’s the list of projects that came out of the 10/15 hackathon event in SF and DC (NYC coming soon). How to Occupy: Question and answer site for #occupy organizers. Users can ask questions about issues they’re dealing with, and others can share their experience. The code for site is up here: and for the mobile app, here: