Many operations more harmful than beneficial, top surgeon warns. Too many surgeons are performing operations that are likely to do more harm than good, a leading orthopaedic surgeon says. 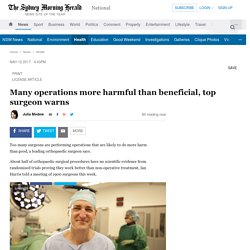 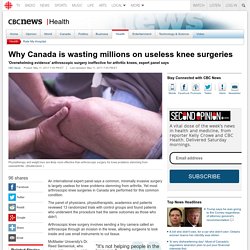 Yet most arthroscopic knee surgeries in Canada are performed for this common condition. The panel of physicians, physiotherapists, academics and patients reviewed 13 randomized trials with control groups and found patients who underwent the procedure had the same outcomes as those who didn't. Arthroscopic knee surgery involves sending a tiny camera called an arthroscope through an incision in the knee, allowing surgeons to look inside and use small instruments to cut tissue.

The Urgent Need for Evidence in Arthroscopic Meniscal Surgery. Untitled. Prostate cancer patients report that surgery offers worst outcome on quality of life - Health. At the moment a man hears a diagnosis of prostate cancer, his first thought is often of survival. 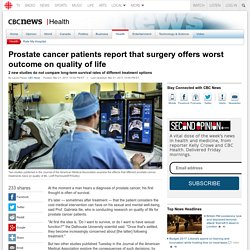 It's later — sometimes after treatment — that the patient considers the cost medical intervention can have on his sexual and mental well-being, said Prof. Gabriela Ilie, who is conducting research on quality of life for prostate cancer patients. Controversial test could be leading to unnecessary open heart operations. Issued by University of Leicester Press Office on 24 February 2017 An approved international test to check whether people need open heart surgery could be sending twice as many people under the knife unnecessarily, at a cost of nearly £75m, research by the University of Leicester has suggested. 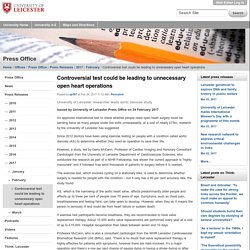 Since 2012 doctors have been using exercise testing on people with a condition called aortic stenosis (AS) to determine whether they need an operation to save their life. However, a study, led by Gerry McCann, Professor of Cardiac Imaging and Honorary Consultant Cardiologist from the University of Leicester Department of Cardiovascular Sciences, who conducted the research as part of a NIHR Fellowship, has shown the current approach is “highly inaccurate” and if followed may send thousands of patients to surgery before it is needed. Healthcare's perverse financial incentives - Frugal Nurse. A hospital puts profits over patient safety First do no harm. 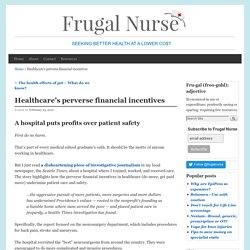 That’s part of every medical school graduate’s oath. It should be the motto of anyone working in healthcare. But I just read a disheartening piece of investigative journalism in my local newspaper, the Seattle Times, about a hospital where I trained, worked, and received care. The story highlights how the perverse financial incentives in healthcare (do more, get paid more) undermine patient care and safety. Why do surgeons continue to perform unnecessary surgery? Patient Safety in Surgery201711:1 DOI: 10.1186/s13037-016-0117-6 © The Author(s). 2017 Received: 14 December 2016 Accepted: 14 December 2016 Published: 13 January 2017. 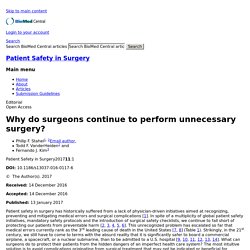 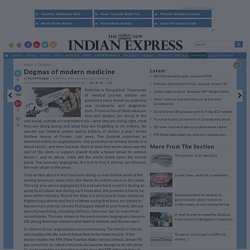 Thousands of medical journal articles are published every month on potential new treatments and diagnostic tests. Precious few of them measure how well doctors are doing in the real world, outside of controlled trials—what they are doing right, what they are doing wrong and what they are forgetting to do entirely. No wonder our medical system wastes billions of dollars a year,” writes Mathew Herper of Forbes. Last week, The Outlook published an extensive article on angioplasties—the procedure to remove blocks in a blood vessel—and their hazards. Contralateral Prophylactic Mastectomy Decisions in a Population-Based Sample of Patients With Early-Stage Breast Cancer. Laparoscopic adhesiolysis was less beneficial than laparoscopy alone in the long term. Doctors perform thousands of unnecessary surgeries. Spinal fusions serve as case study for debate over when certain surgeries are necessary. By some measures, Federico C. 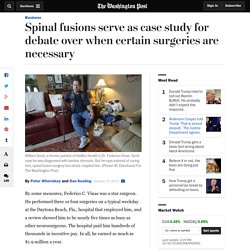 Vinas was a star surgeon. He performed three or four surgeries on a typical weekday at the Daytona Beach, Fla., hospital that employed him, and a review showed him to be nearly five times as busy as other neurosurgeons. The hospital paid him hundreds of thousands in incentive pay. In all, he earned as much as $1.9 million a year. Introducing decision aids at Group Health was linked to sharply lower hip and knee surgery rates and costs.

Understanding regional variation in the use of surgery. To view the full text, please login as a subscribed user or purchase a subscription. 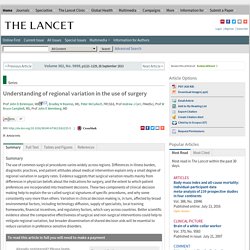 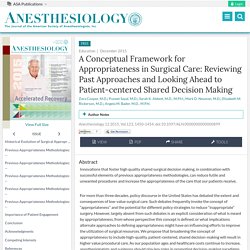 Francis Hospital and Medical Center, Providence, Rhode Island (S.K.A.); Department of Anesthesiology and Critical Care, University of Pennsylvania, Philadelphia, Pennsylvania (M.D.N.); Department of Anesthesiology, Perioperative and Pain Medicine, Brigham and Women’s Hospital, Boston, Massachusetts (E.M.R., A.M.B.); and Department of Psychosocial Oncology and Palliative Care, Dana Farber Cancer Institute, Boston, Massachusetts (E.M.R.). Why ‘Useless’ Surgery Is Still Popular. One surgeon says you need an operation. Another says you don't. Here's why that happens. In 2002, when Tim Copeland was just 12 years old, he started having seizures and difficulty speaking. His physician in San Diego couldn't figure out what the problem was.

When Copeland eventually went to see a neurosurgeon in Escondido, California, he was diagnosed with cerebral cavernous malformation, a disorder of the blood vessels that causes them to leak into the brain. The surgeon told Copeland that his brain was inoperable and the best option was radiation therapy to slow the bleeding. Effect of PCI on Long-Term Survival in Patients with Stable Ischemic Heart Disease. Australians are undergoing unnecessary surgery – here’s what we can do about it.

For decades, clinicians and researchers have been concerned about patients getting treatments, including operations, that don’t work. As well as failing to treat the original health problem, ineffective care exposes patients to complications and side-effects and waste precious health-care resources. Yet while many clinicians believe there is a problem, the policy response has been limited. It is often hard to isolate treatment choices that are inappropriate.

A choice that is wrong in one case may be right in another. Repeated Upper Endoscopy in the Medicare Population: A Retrospective Analysis. From the Veterans Affairs Outcomes Group, White River Junction, Vermont; Dartmouth-Hitchcock Medical Center, Geisel School of Medicine, Lebanon, New Hampshire; and Dartmouth Institute of Health Policy and Clinical Practice, Hanover, New Hampshire. Disclaimer: The findings, statements, and views expressed are those of the authors and do not necessarily represent those of the Medicare Payment Advisory Commission, the U.S. Department of Veterans Affairs, or the U.S. government. All authors had full access to all of the data in the study and take full responsibility for the integrity of the data and the accuracy of the data analysis. Heart-attack-stent-angiogram-chest-pain-angina. Photo Millions of Americans have had — small wire cages — inserted in their coronary arteries to prop them open. And many are convinced the devices are protecting them from heart attacks.

After all, a partly blocked artery is now cleared, and the pain in a heart muscle starved of blood often vanishes once the artery is open again. But while stents unquestionably save lives of patients in the throes of a heart attack or a threatened heart attack, there is no convincing evidence that stents reduce heart attack risk for people suffering from the chest pains known as . A Sea Change in Treating Heart Attacks.

Measuring overtreatment: a structural model to estimate the impact of non-clinical factors on healthcare utilization. New Evidence That We Just Need To Give Women More Time To Labor. Large-for-Gestational-Age Ultrasound Diagnosis and Risk for... : Obstetrics & Gynecology. OBJECTIVE: To assess the accuracy of a large-for-gestational-age (LGA) ultrasound diagnosis and the subsequent risk for cesarean delivery associated with ultrasound diagnosis of LGA among women with gestational diabetes mellitus. Why Most Brazilian Women Get C-Sections - Olga Khazan. RECIFE, Brazil — When Ivana Borges learned she was pregnant, she told her obstetrician that she wanted a natural birth.

Read this before you get your knee replaced - Blog. More than sixty thousand Canadians per year and climbing get knee replacement surgery. A U.S study published last week in the British Medical Journal finds that a good number of patients south of the border may be getting new knees before they need them. The study by researchers in the U.S. and the Netherlands looked at just under 4,500 patients with osteoarthritis of the knee and those at high risk of arthritis. They looked at the impact of knee replacement surgery on patients and the cost of the surgery to the system.

Lumbar fusion no better than exercise and therapy in the long term. Arthroscopic surgery for knee pain. Association of hip pain with radiographic evidence of hip osteoarthritis: diagnostic test study. Most surgical meniscus repairs are unnecessary. Arthroscopic surgery for degenerative knee: systematic review and meta-analysis of benefits and harms. Treatment of proximal humerus fractures in the elderly. Study: Arthroscopic Knee Surgery No Better Than Sham Surgery.