#lfw4all. #lfw4all. #LFW4All Isn't Just About Colour and Diversity on the Catwalks - It's About Our Young Women  Little known fact: I spent some of my childhood growing up in India. 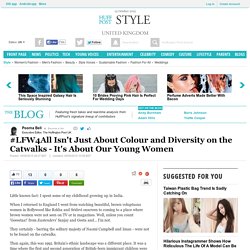 When I returned to England I went from watching beautiful, brown voluptuous women in Bollywood like Rekha and Sridevi onscreen to coming to a place where brown women were not seen on TV or in magazines. Well, unless you count 'Geeeetaa! ' from Eastenders' Sanjay and Geeta and... I'm not. They certainly - barring the solitary majesty of Naomi Campbell and Iman - were not to be found on the catwalks. Then again, this was 1992. So that was 1992. But why, over 20 years on, are we still not that much better off when it comes to colour diversity on the catwalks? In my journey to write an unbiased picture of the current catwalk diversity problem and the possible solutions, I have become increasingly incensed by a) the wall of silence that surrounds the issue and b) the excuses that are offered up as an explanation for why this is the case. It's the biggest showcase of fashion (and beauty) in the world. So what will effect change? London Fashion Week: Does #LFW Have A Diversity Problem?

London Fashion Week fans enjoy watching the shows for the excitingly diverse array of new styles to feast their eyes on - sadly the same level of diversity isn't often reflected in the choice of models walking the runway. 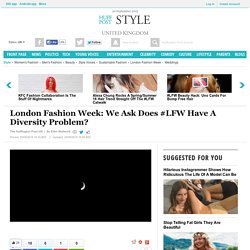 Catwalk models tend to have a very uniform look with little variation between the individuals' skin tone and body type. Models on the catwalk at the Jasper Conran Spring/Summer 2016 show. Perhaps some designers and catwalk casting directors don't think the people in the audience at their shows really notice or are affected by the amount of diversity (or lack of it) on the runway.

But that certainly isn't the case, as HuffPost UK Style reporter Rosy Cherrington found out when she asked people who had seen the shows for their thoughts on the level of diversity on the catwalks. Watch the video above to hear their views. "The main barrier to change is people giving excuses as to why this is and continuing to hide behind them. Close Time Life Pictures / Getty Images Donyale Luna. Transgender Model Johanna Londinium On Why The Fashion Industry Needs To Be More Inclusive. Transgender models are finally having their moment - with more fashion brands than ever embracing the fact that beauty comes in every different form. 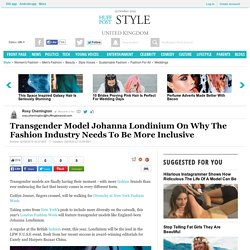 Caitlyn Jenner, fingers crossed, will be walking for Givenchy at New York Fashion Week. Taking notes from New York's push to include more diversity on the catwalk, this year's London Fashion Week will feature transgender models like England-born Johanna Londinium. A regular at the British fashion event, this year, Londinium will be the lead in the LFW F.U.S.E event, fresh from her recent success in award-winning editorials for Candy and Harpers Bazaar China. Johanna Londinium by Giovanni Martins Having trained as a makeup artist as a teen, the model begun her career in front of the camera six years ago as a performance artist and told HuffPost UK Style she hopes to represent those from transgendered backgrounds.

"I would love to be able to represent at a higher level and to a bigger, more mainstream audience", she said. Close Vanity Fair. Upcoming Models Of Colour To Watch On The Catwalk: Be Part Of Our #NYFW4All And #LFW4All Campaign. If inclusivity will not come from the catwalk, then it's our job to bring inclusivity to the catwalk. 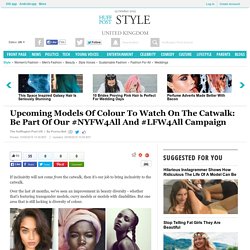 Over the last 18 months, we've seen an improvement in beauty diversity - whether that's featuring transgender models, curvy models or models with disabilities. But one area that is still lacking is diversity of colour. To that end, our colleagues in the US have created the hashtag #NYFW4All, which will highlight moments in Fashion Week that include people of all skin tones, genders, sizes, shapes and personalities.

Executive editor for HuffPost US Fashion and Beauty Dana Oliver said: " While New York Fashion Week has historically been an exclusionary event, people of all sizes, races and from different backgrounds look to the runways and serve as inspiration for the trends we see each season. "It's about time NYFW reflects that, and the editors at HuffPost Lifestyle are championing this cause to make Fashion Week for everyone. " Nykhor Paul Aamito Lagum Shanina Shaik Betty Adewole Close.