Piggate. The "Piggate" scandal in the United Kingdom concerns one of the allegations made by Lord Ashcroft and Isabel Oakeshott in their unauthorised biography of British Prime Minister David Cameron, Call Me Dave. 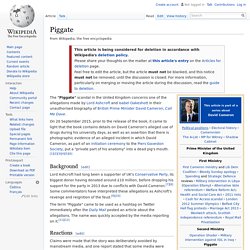 On 20 September 2015, prior to the release of the book, it came to light that the book contains details on David Cameron's alleged use of drugs during his university days, as well as an assertion that there is photographic evidence of an alleged incident in which David Cameron, as part of an initiation ceremony to the Piers Gaveston Society, put a "private part of his anatomy" into a dead pig's mouth.[1][2][3][4][5][6] Background[edit] The term "Piggate" came to be used as a hashtag on Twitter immediately after the Daily Mail posted an article about the allegations.

The name was quickly accepted by the media reporting on it.[11][12] [edit] Suzanne Moore in The Guardian[20] compared events to those related by Hunter S. References[edit] David Cameron, drugs, debauchery and the making of an extraordinary Prime Minister. Shocking claims emerge of David Cameron's university days in new bookCall Me Dave: The Unauthorised Biography is written by Michael AshcroftDinner party guest claims to have seen cocaine in the Cameron householdBut source did not see either Cameron or his wife Samantha take the drug By Michael Ashcroft and Isabel Oakeshott For The Daily Mail Published: 22:00 GMT, 20 September 2015 | Updated: 10:58 GMT, 21 September 2015 The door was always shut, but anyone walking past might have caught a whiff of the sweet musky smell of drugs and heard laughter and music from within. 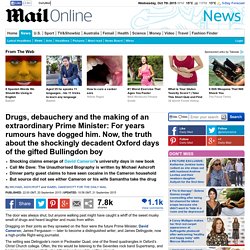 Dragging on their joints as they sprawled on the floor were the future Prime Minister, David Cameron; James Fergusson — later to become a distinguished writer; and James Delingpole, now a high-profile Right-wing journalist. The setting was Delingpole’s room in Peckwater Quad, one of the finest quadrangles in Oxford’s Christ Church college. They even gave themselves a name: The Flam Club. Subsequently, she became a nun. What #PigGate Really Says About the State of British Politics. I am going to try to do something perhaps unwise, perhaps impossible: I’m going to try to write something serious about David Cameron and the scandal that has come to be known as “PigGate.” 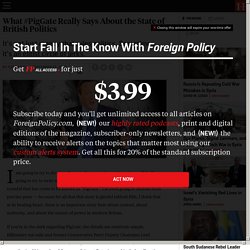 I’m even going to abstain from porcine puns — because for all that this story is gleeful tabloid filth, I think that at its beating heart, there is an important story here about control, about authority, and about the nature of power in modern Britain. If you’re in the dark regarding PigGate, the details are relatively simple. Billionaire tax exile and former Conservative Party Deputy Chairman Lord Michael Ashcroft has co-written, with journalist Isabel Oakeshott, an unauthorized biography of Cameron. It is not flattering and includes allegations of drug use, among other things. It’s the British establishment that has a problem with democracy. If there were any doubts that the British establishment has a problem with democracy, the last few days should have put them to rest. 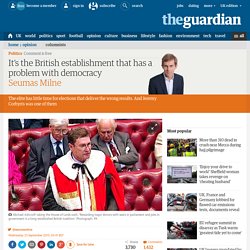 Mark Fisher on #piggate and the death of British satire. How do you deal with a story like #piggate? A spin doctor’s view. As a spin doctor, there are two phone calls that make your heart sink: the one from a journalist relaying some excruciating allegation about your boss’s personal life or past history; and the second, the call you have to make to said boss in order to work out your response. 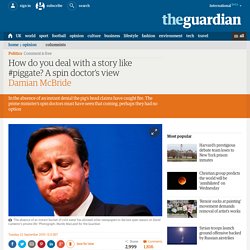 Working for Gordon Brown, a man of Victorian sensibilities and a volatile temper, the second call was invariably greeted with the single word “What?!” Repeated with increasing volume and violence as I recounted the misdeed of which he had been accused. Even so, I’d conclude with the essential question that all spin doctors must ask in these situations: “What’s the truth?”

Not, “What shall we say?” Or, “How do you want me to handle it?” Sometimes, especially with Brown, that question provoked an angry barrage of abuse, as if just by asking it, I was implying the allegation might be true. So what’s the truth? However, I’m confused by the lack of an official denial. De biografie van David Cameron: van fikse beschuldigingen tot #piggate. Nee, het is niet het varkensverhaal dat David Cameron de meeste schade zal berokkenen. 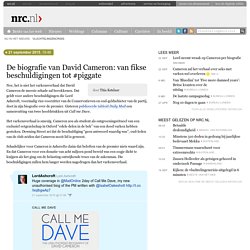 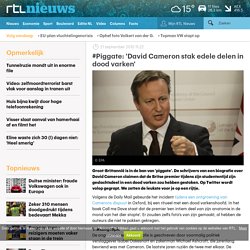 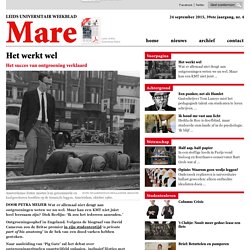