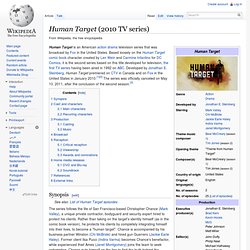 Rather than taking on the target's identity himself (as in the comic book version), he protects his clients by completely integrating himself into their lives, to become a "human target". Chance is accompanied by his business partner Winston (Chi McBride) and hired gun Guerrero (Jackie Earle Haley). Former client Ilsa Pucci (Indira Varma) becomes Chance's benefactor, while experienced thief Ames (Janet Montgomery) joins the team to seek redemption. Chance puts himself on the line to find the truth behind the mission.[4] Even his own business partner Winston does not know what drove him towards this life,[5] although it is explained in the first season finale episode (which also explains about the name Christopher Chance itself).[6] From left to right: Guerrero, Ames, Chance, Pucci and Winston.

Birds of Prey (TV series) A central feature of the series is the concept of metahumans: individuals born with powers that cannot be explained. 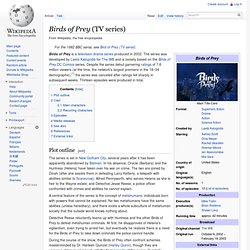 No two metahumans have the same abilities (unless hereditary), and there exists a whole subculture of metahuman society that the outside world knows nothing about. Detective Reese reluctantly teams up with Huntress and the other Birds of Prey to defeat metahuman criminals. At first, he disapproves of Helena's vigilantism, even trying to arrest her, but eventually he realizes there is a need for the Birds of Prey to take down criminals the police cannot handle. Smallville. Lois & Clark: The New Adventures of Superman. Lois & Clark: The New Adventures of Superman (titled The New Adventures of Superman when aired in the UK by the BBC, and commonly known simply as "Lois and Clark") is a live-action American television series based on the characters in Superman and Action comics. 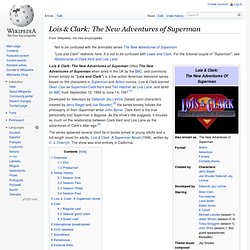 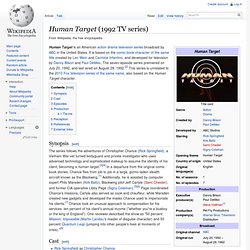 Television, told The New York Times in December 1991 that Human Target was intended for both American audiences and the international television market, saying "Hopefully, it's a formula for all tastes that could have a strong foreign market. The Flash (TV series) Swamp Thing: The Series. Overview[edit] Durock worked twelve hours a day, six days a week for 50 straight episodes without a break. 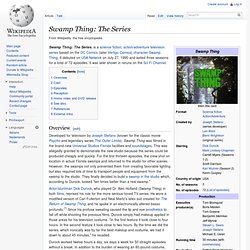 In addition to the burden of wearing an 80-pound costume, the schedule required him to learn ten pages of dialogue each day. "I don't think this has ever been done before in the history of Hollywood where a guy wore a costume for that amount of time," Durock noted in a 2008 interview. However, he also recited the schedule as "two shows a week, three days each show, ten pages of dialogue a day. Monday, Tuesday, and Wednesday, and at the end of the day they hand you another thirty pages. " Swamp Thing debuted with "The Emerald Heart" on Friday, July 27, 1990 at 10:30PM Eastern. After the pilot episode and first 12 episodes, Executive Producer Stefano left the series and production was temporarily halted for some retooling by new Executive Producer Tom Greene. Cast[edit] Superboy (TV series)

As with all Superman properties, Joe Shuster and Jerry Siegel, Superman's creators, received no proceeds whatsoever from the show. 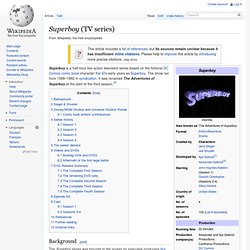 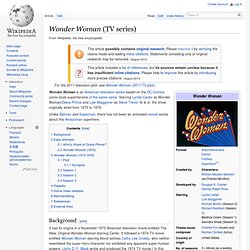 Starring Lynda Carter as Wonder Woman/Diana Prince and Lyle Waggoner as Steve Trevor Sr & Jr, the show originally aired from 1975 to 1979. Stills from the pilot presentation 1967. Cathy Lee Crosby in the first Wonder Woman film. Wonder Woman's first broadcast appearance in live-action television was a television movie made in 1974 for ABC. Written by John D. The pilot aired originally on March 12, 1974[6] and was repeated on August 21 of that year.[7] Ratings were described as "respectable but not exactly wondrous Warner Brothers released this pilot into syndication as a stand-alone 90-minute telefilm, where it played on independent TV stations throughout the 1970s and 1980s.

On December 11, 2012, Warner Brothers made the Cathy Lee Crosby pilot available as a Video On Demand purchase through their online store. Lynda Carter as Wonder Woman, displaying her ability to deflect bullets. The Secrets of Isis. Premise[edit] Most storylines involved Isis coming to the rescue of high school students who find themselves endangered due to unwise choices. 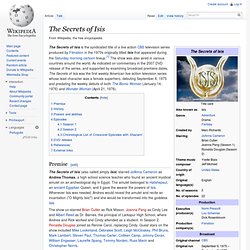 A notable exception was the two-part series finale "Now You See It... " and "...Now You Don't," which had an espionage-related plotline, revealing that Rick Mason has been working secretly for the government on a weather-making machine. This same two-parter introduced a trio of crime-fighting teens dubbed "The Super-Sleuths," and according to the DVD notes, was intended as a backdoor pilot for a Super-Sleuths series that never materialized. It's not known whether this sudden change in direction from school-related plotlines to more traditional superhero adventures would have continued had production not been discontinued.

Shazam! (TV series) There were no such super-villains as Dr. 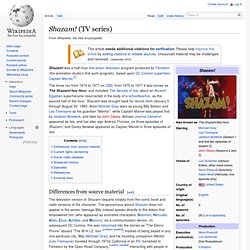 Sivana, Captain Marvel's and Billy's greatest enemy in the source material, and violence was downplayed. Billy, as both himself and as Captain Marvel, would help people out of difficult situations of their own making. As in many Filmation shows and cartoons, moral messages were contained within each episode, crystallized at the end of each episode by Billy learning a new moral lesson from either Mentor or his empowering elders.

As in other media, when he spoke the magic word "Shazam! ", Billy is struck by a magic lightning bolt and is transformed via animation and special effects into the World's Mightiest Mortal, Captain Marvel. The rights to the series rest with DC's parent company Warner Bros., while the television broadcast license is held by DreamWorks Animation, the successor-in-interest to Filmation. On July 11, 2012, it was announced that Warner Bros. will release Shazam! Batman (TV series) Batman is a 1960s American live action television series, based on the DC comic book character of the same name. 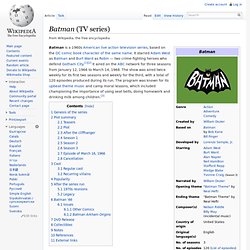 It starred Adam West as Batman and Burt Ward as Robin — two crime-fighting heroes who defend Gotham City.[1][2] It aired on the ABC network for three seasons from January 12, 1966 to March 14, 1968. The show was aired twice weekly for its first two seasons and weekly for the third, with a total of 120 episodes produced during its run. The program was known for its upbeat theme music and camp moral lessons, which included championing the importance of using seat belts, doing homework and drinking milk among children.[3] The title sequence featured animated versions of Batman and Robin, drawn in the then-current style of the comic books, running towards camera and then fighting an assortment of villains (including several "marquee" villains like the Joker). Adventures of Superman (TV series) Adventures of Superman is an American television series based on comic book characters and concepts created in 1938 by Jerry Siegel and Joe Shuster.

The show is the first television series to feature Superman and began filming in 1951 in California. Sponsored by cereal manufacturer Kellogg's, the syndicated show's first, and last, air dates are disputed but generally accepted[by whom?] As September 19, 1952 and April 28, 1958. [citation needed] The show's first two seasons (episodes 1–52, 26 titles per season) were filmed in black-and-white; seasons three through six (episodes 53–104, 13 titles per season) were filmed in color but originally telecast monochromatically in first-run syndication.