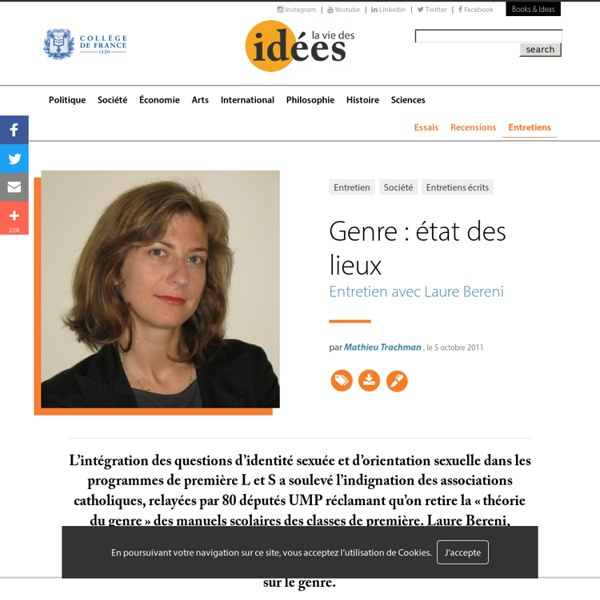 Gender equality in space? Russia's all-female practice mission to the moon The six Russian women in red jumpsuits at a pre-space mission press conference kept having to field questions about makeup and men. "We are doing work," Anna Kussmaul, one of the women, responded according to the AFP. "When you're doing your work, you don't think about men and women." On Wednesday an all-female Russian space crew started an eight-day mock moon mission, which researchers say will help Russian women catch up after four decades of male-dominated aeronautics. Not My Nigel "Not my Nigel" is a shorthand description for a common defensive reaction of many women to feminist observations and explanations of widespread sexist activity and sexist motivations, which is that while certainly some other men are oppressively sexist, their particular partners/sons/fathers/brothers couldn’t possibly be part of the problem.[1] i.e. “Not my Nigel! He’d never do anything like that” or more invidiously

Prudish. Flirty. Whore. Pretty Unnecessary Taking beauty out of body positivity In the early 2000s, when I was a burgeoning fashionable fat girl, I stumbled across the LiveJournal community Fatshionista. I loved seeing pictures of women my size or larger dressed in stylish, interesting, sexy clothes, embracing bright colors and form-fitting cuts, performing liberation and defiance. Even while I stayed on the outskirts of body positivity during my high school and college years, I still found a well of confidence and self-esteem that television commercials and women’s magazines never offered me. Don’t Fall For the New H&M Campaign A new breed of feminism has been rearing its big, beautiful head. The fourth wave has swept in on the tides of the internet the last decade, and though it isn’t yet as defined or action-based as its older sisters, it is more inclusive than them in nature and diverse in its messages. As well as traditional feminist issues like unequal pay and domestic violence, fourth-wave feminism tackles a new host of problems, from online misogyny and slut shaming to campus rape and the rights of women in developing countries.

Transgender People Can Explain Why Women Don't Advance at Work Fifty years after The Feminine Mystique and 40 years after Title IX, the question of why women lag in the workplace dogs researchers and lay people alike. While women are entering the professions at rates equal to men, they rise more slowly, and rarely advance to the top. They’re represented in smaller numbers at the top in fields from science to arts to business. Some suggest that there is something different about women—women have stalled because of their personal choices, or their cognitive and emotional characteristics, whether innate or socialized.

Judith Butler Explained with Cats Following hot on the heels of Foucault Explained with Hipsters, here’s JB’s Gender Trouble explained in Socratic dialogue style. With cats. All page references from Butler, J. (1990 [2008: 1999]). An Impressive List of Female Authors from Antiquity I received a link to the following in an email from my undergraduate poetry teacher the amazing poet and translator Olga Broumas. The post is on tumblr on a page by DiasporaChic, bit the original author who has already won my admiration is Terpsikeraunos. As usual, just when I thought I knew something, someone comes along to disabuse me of my pretensions! Aesara of Lucania: “Only a fragment survives of Aesara of Lucania’s Book on Human Nature, but it provides a key to understanding the philosophies of Phintys, Perictione, and Theano II as well. Aesara presents a familiar and intuitive natural law theory. She says that through the activity of introspection into our own nature – specifically the nature of a human soul – we can discover not only the natural philosophic foundation for all of human law, but we can also discern the technical structure of morality, positive law, and, it may be inferred, the laws of moral psychology and of physical medicine.