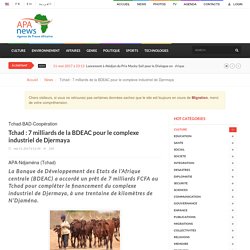 United States Africa Command. N’DJAMENA, Chad – The room spun with a diverse pattern of clothing, dialects and languages as 120 women and men from every swath of Chad and the U.S. sipped tea—and discussed how to change their world. 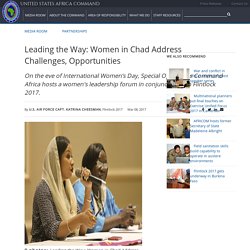 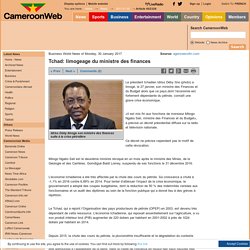 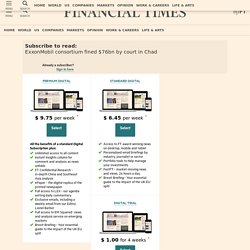 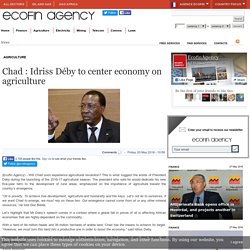 This is what suggest the words of President Deby during the launching of the 2016-17 agricultural season. The president who said he would dedicate his new five-year term to the development of rural areas, emphasized on the importance of agriculture toward the country’s emergence. “Oil is poverty. To achieve true development, agriculture and husbandry and the keys. Let’s not lie to ourselves, if we want Chad to emerge, we must rely on these two. Idriss Deby prône une diversification de l'économie. Par ekonomico.fr/ - 18/03/2016 C'est la Seule solution, selon le président du Tchad, à une crise qui semble ne pas vouloir en finir. 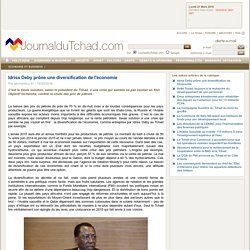 Objectif recherché, contrer la chute des prix de pétrole. Chad: 'Fed Up' Chadians Shut Down N'djamena. By Christina Okello Chad's opposition brought the country to a standstill on Wednesday in an act of defiance against the government. 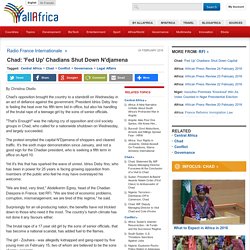 President Idriss Deby Itno is feeling the heat over his fifth term bid in office, but also his handling of the brutal rape of a teenage girl by the sons of senior officials. "That's Enough! " was the rallying cry of opposition and civil society groups in Chad, who called for a nationwide shutdown on Wednesday, and largely succeeded. The protest emptied the capital N'Djamena of shoppers and cleared traffic. Chad president says will reintroduce constitutional term limits. N’DJAMENA – Chad’s President Idriss Deby, in power for more than a quarter of a century, said on Tuesday he would reintroduce constitutional term limits if he won a fifth term in an election slated for April. 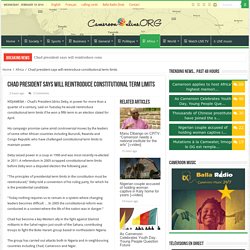 His campaign promise came amid controversial moves by the leaders of some other African countries including Burundi, Rwanda and Congo Republic who have challenged constitutional term limits to maintain power. Deby seized power in a coup in 1990 and was most recently re-elected in 2011. A referendum in 2005 scrapped constitutional term limits before Deby won a disputed election the following year. “The principles of presidential term limits in the constitution must be reintroduced,” Deby told a convention of his ruling party, for which he is the presidential candidate. Lac Tchad : poumon d’eau et vecteur de vie économique pour (...) Aujourd’hui, le lac Tchad se meurt. 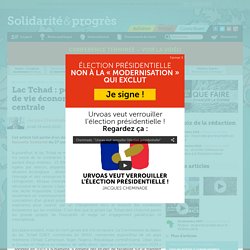 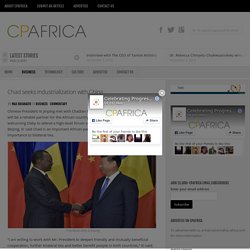 While welcoming Deby to attend a high-level forum on poverty reduction and development in Beijing, Xi said Chad is an important African partner for China, and China attaches great importance to bilateral ties. Presidents Deby & Jinping “I am willing to work with Mr. President to deepen friendly and mutually beneficial cooperation, further bilateral ties and better benefit people in both countries,” Xi said, “China is willing to be a reliable partner for Chad to achieve industrialization and modernization,” Xi called on the two countries to take full advantage of their complementary economies, focusing on energy cooperation and exploring practical cooperation in industry, infrastructure, industrial parks, agriculture, telecommunications and human resources.

Chadian and Chinese national flags. Chad is seen on television of the United Arab Emirates, Sharjah. Chad Arrests Boko Haram Leader in N'Djamena, Articles. A Chadian Public Prosecutor, Alghassim Khamis, said yesterday that one of the key Boko Haram leaders, Baana Fanay, who has been coordinating trafficking of weapons in Nigeria, Cameroun and Chad was arrested on Sunday in N’Djamena, the capital of Niger Republic. Khamis said Fanay, alias Mahamat Moustapha, was arrested by security forces after a fierce resistance, reported AFP.

He said Fanay, who was arrested with two other terrorists, was responsible for the purchase of weapons and recruitment of fighters for Boko Haram. The prosecutor said a search in the suspect’s house led to the seizure of different weapons and documents written in Arabic by Boko Haram leader, Abubakar Shekau, targeting the sect’s recruits. He said the arrest also led investigators to discover the location of seven other terrorists hiding in a house in Diguel, a Dinguessou suburb, on the periphery of N’Djamena. Khamis said a man believed to be the financier of the group was arrested and is under investigations. Chad to Reschedule $1.5 Billion of Glencore-Led Oil Loans. Chad’s government is seeking to delay repayment of about $1.5 billion of Glencore Plc-led bank loans to conserve cash after a collapse in crude prices and its intervention in the war against Boko Haram in Nigeria.

Rescheduling repayments of advances on oil sales received in 2013 and 2014 will save the government $400 million, according to a Finance Ministry document presented last month to the International Monetary Fund. The document was given to Bloomberg by an official in the ministry who asked not to be identified because it hasn’t been released publicly. Promosol, un four solaire made in Tchad - vidéo dailymotion. No strings attached: African Union seeks financial independence. African leaders have agreed in principle to impose a flurry of taxes in a bid to finance their pan-African bloc, set up to push the continent's diplomatic agenda but dependent on foreign handouts. After a two-day summit held in the African Union's Chinese-built headquarters in the Ethiopian capital Addis Ababa, heads of state proposed new taxes on airline tickets, hotel stays and text messages.

The AU was once heavily bankrolled by toppled Libyan strongman Muammar Gaddafi, who championed the institution as a means to challenge Western hegemony. Now, however, 72 per cent of the AU's operational budget comes from international donors led by the United States and the European Union. "Over 70 percent of our budget is foreign funded. This is not sustainable," said Zimbabwean President Robert Mugabe, who during the summit was appointed to the AU's rotating chair - certain to raise eyebrows among key donors who have sanctioned him for political violence and intimidation. *** Documentaire Afrique E12 Tchad La couleur de l or noir *** AFC Facilitates $1.305bn Deal in Chad, Articles. AFC logo The Africa Finance Corporation (AFC) yesterday disclosed that it was the lead arranger of a $1.305 billion pre-payment facility for Glencore Energy UK.

The facility would be used by Glencore to provide financing of up to $1.450 billion to Société des Hydrocarbures du Tchad (“SHT”), the National Oil Company of Chad. The pre-payment facility would in turn, be used by SHT to acquire Chevron Global Energy Incorporated’s 25 per cent participating interest in the Doba consortium, which owns and operates oil producing assets in Chad. Other financial institutions involved in the pre-payment facility were Credit Agricole Corporate and Investment Banking; Deutsche Bank, FBN Bank (UK) Limited, Natixis, Société Generale Bank and Citibank N.A. as the account bank.nAFC’s contribution to the financing was $100 million.