S.Africa to allow all Africans to enter the country without Visas. Visa-Free Travel For Africans (Esp. South Africans): Here’s A List of 114 Countries Where Your Green Mamba Counts (Infographic) NOTES (updated): — This list includes visas on arrival. — Although some of the islands mentioned are not linked to a continent, they were grouped with countries in that region for clarity. — South Africans do require a visa for Turkey, although it is free and requires only an online application. 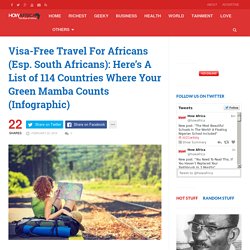 A visa on arrival is no longer an option. Infographic designed by Andisiwe Juta; Header image by Shutterstock. SA sees increase in Saudi Arabia tourists. By – SAnews.gov.za Pretoria – The number of Saudi Arabia tourists visiting South Africa has increased steadily over the past few years with about 6 000 tourists per annum visiting the country, the Department of Tourism says. 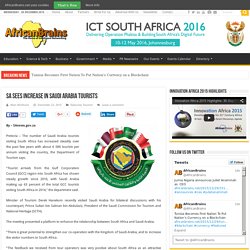 “Tourist arrivals from the Gulf Corporation Council [GCC] region into South Africa has shown steady growth since 2010, with Saudi Arabia making up 63 percent of the total GCC tourists visiting South Africa in 2014,” the department said. Minister of Tourism Derek Hanekom recently visited Saudi Arabia for bilateral discussions with his counterpart, Prince Sultan bin Salman bin Abdulaziz, President of the Saudi Commission for Tourism and National Heritage (SCTH). The meeting presented a platform to enhance the relationship between South Africa and Saudi Arabia. “There is great potential to strengthen our co-operation with the Kingdom of Saudi Arabia, and to increase the visitor numbers to South Africa. Airbnb explodes in South Africa. Year-on-year supply and demand for internet accommodation service Airbnb is exploding in South Africa with triple-digit percentage growth. 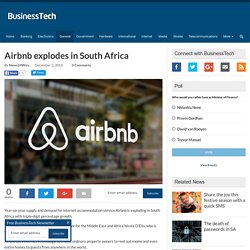 This is according to Airbnb general manager for the Middle East and Africa Nicola D’Elia, who is visiting South Africa this week. Airbnb uses internet technology to enable ordinary property owners to rent out rooms and even entire homes to guests from anywhere in the world. The number of South African homes listed on Airbnb has jumped from around 9 000 in July this year to 13 000, said D’Elia.

But on a year-on-year basis, he told Fin24 the service has grown 163% in terms of local homes listed, while the number of nights booked in South Africa has increased 259%. South Africa is Airbnb’s biggest African market followed by Morocco, which has 9 000 homes, said D’Elia. “It’s a bit like the S-curve where we’re now at that point where growth is becoming exponential,” D’Elia told Fin24.

South Africa focuses on East African market to grow tourist numbers. The agency charged with marketing South Africa as a tourist destination is set to open an office in Nairobi, which will act as a marketing hub in the region. 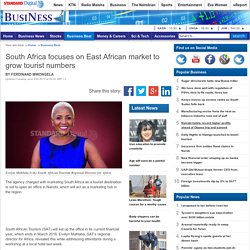 South African Tourism (SAT) will set up the office in its current financial year, which ends in March 2016. Evelyn Mahlaba, SAT’s regional director for Africa, revealed this while addressing attendants during a workshop at a local hotel last week. S Africa tourism growth hinges on new visa rules. New hotels in Cape Town are expected to leadSouth Africa’s tourism growth. 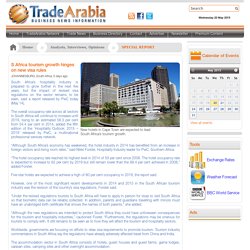 JOHANNESBURG, South Africa, 5 days ago South Africa’s hospitality industry is prepared to grow further in the next five years, but the impact of revised visa regulations on the sector remains to be seen, said a report released by PwC today (May 14). The overall occupancy rate across all sectors in South Africa will continue to increase until 2019, rising to an estimated 58.3 per cent from 54.4 per cent in 2014, added the fifth edition of the ‘Hospitality Outlook: 2015 – 2019’ released by PwC, a multinational professional services network. 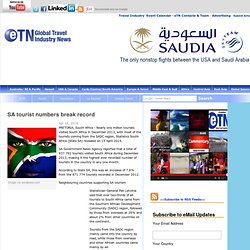 SA Government News Agency reported that a total of 937 792 tourists visited South Africa during December 2013, making it the highest ever recorded number of tourists in the country in any one month. According to Stats SA, this was an increase of 7.6% from the 871 774 tourists recorded in December 2012. South Africa boasts 10% tourism growth as Germans lead the way. South Africa has once again announced increasing tourism numbers: the months from January to October 2012 showed an increase of 10,4%, with 7,535,498 tourist arrivals compared to 6,823,517 tourist arrivals for the same period in the previous year. 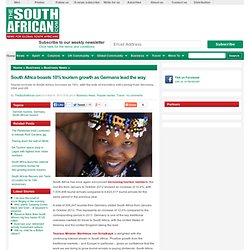 A total of 204,247 tourists from Germany visited South Africa from January to October 2012. This represents an increase of 12,2% compared to the corresponding period in 2011. Germany is one of the key traditional overseas markets for travel to South Africa, with the United States of America and the United Kingdom taking the lead. Tourism Minister Marthinus van Schalkwyk is delighted with the continuing interest shown in South Africa. “Positive growth from the traditional markets – and Europe in particular – gives us confidence that the work we are doing to grow tourist arrivals is paying dividends.

Van Schalkwyk also reiterated the importance of tourism as an economic growth engine for the country. SA tourism increases in 2012  Tourism numbers increased by 10.4% between January and October last year, the tourism ministry said on Wednesday. 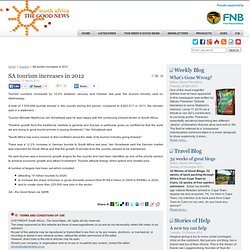 A total of 7,535,498 tourists arrived in the country during the period, compared to 6,823,517 in 2011, the ministry said in a statement. Tourism Minister Marthinus van Schalkwyk said he was happy with the continuing interest shown in South Africa. "Positive growth from the traditional markets in general and Europe in particular gives us confidence that the work we are doing to grow tourist arrivals is paying dividends," Van Schalkwyk said. 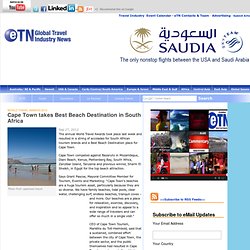 Cape Town competed against Bazaruto in Mozambique, Diani Beach, Kenya, Plettenberg Bay, South Africa, Zanzibar Island, Tanzania and previous winner, Sharm El Sheikh, in Egypt for the top beach attraction. Says Grant Pascoe, Mayoral Committee Member for Tourism, Events and Marketing: “Cape Town’s beaches are a huge tourism asset, particularly because they are so diverse. We have family beaches, tidal pools, clear water, challenging surf, endless beaches, tranquil coves – and more. Our beaches are a place for relaxation, exercise, discovery, and inspiration and so appeal to a wide range of travelers and can offer so much in a single visit.”

South Africa enjoyed a significant share of the accolades at the 19th World Travel Awards.