"One way investors are taking a 'safety net' leap into Africa is through the Indian Ocean island of Mauritius.

Multinational corporations, investment funds and other international investors — attracted by above average returns and high growth rates — are increasingly favouring the Mauritius Global Business Sector as a platform of choice to structure their investments into African countries.

"By choosing the Mauritius route into Africa, investors can avail of the treaty benefits and achieve significant tax savings, mainly in the form of reduced withholding tax on dividend distributions and exemption from capital gains," says Nirmal Heeralall, of UHY’s member firm on Mauritius, UHY Heeralall.

Mauritius has also signed Investment Promotion and Protection Agreements with 15 African countries which, typically, offer certain guarantees to investors, such as free repatriation of investment capital and returns, guarantee against expropriation and dispute settlement arrangements. 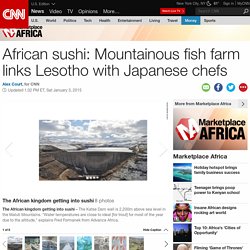 Thanks to Highlands Trout, and their operation 2,200m above sea level in the Maluti Mountains, supermarket shoppers in Osaka, Kyoto and Tokyo can now get their seafood fix from the landlocked African nation. "Lesotho provide(s) ideal, pristine environmental conditions for the farming of large trout," explains Fred Formanek, managing partner of Advance Africa Management Services, who has developed the Highlands Trout project since 2009. "Water temperatures are close to ideal [for trout] for most of the year due to the altitude. " Production started in 2012 with a haul of 500 tonnes of trout in the first year.

During the current financial year, the company aims to produce three-times that amount. While the business says the Japan-bound fish are stuck on a ship for four weeks, executives insist the added logistics -- and extra costs -- are worth it. 6. TMSA Growth Poles - Growth Poles and Value Chains 131006 FINAL. Sweet energy in Mauritius - CNN Video. Sweet energy in Mauritius Source: CNN Added on 2:57 AM ET, Mon March 30, 2015. 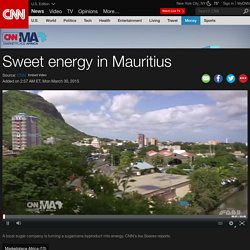 Who Knew? Madagascar Has Africa’s Third Largest Chinese Population. The Chinese population on the east African island of Madagascar defies many of the poorly-informed, albeit widely-held, stereotypes about Chinese migrants on the rest of the continent. 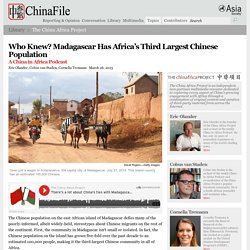 First, the community in Madagascar isn't small or isolated. In fact, the Chinese population on the island has grown five-fold over the past decade to an estimated 100,000 people, making it the third-largest Chinese community in all of Africa. While many Chinese immigrants in the rest of Africa are new to the region, that is not the case in Madagascar. The first wave of Chinese migration to the island dates back to the early 1800s. Whereas Chinese migrants elsewhere in Africa are often viewed quite poorly by the local population, in Madagascar the older generation of Chinese migrants is regarded as among the most popular of the island’s various ethnic minorities. Botswana-based chain supermarket expand regional footprint - $US6 billion gas pipeline proposed for South Africa and Mozambique. 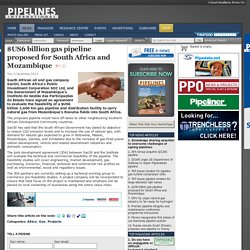 The proposed pipeline would have off-takes to other neighbouring Southern African Development Community countries. SacOil has said that the South African Government has stated its objective to reduce CO2 emission levels and to increase the use of natural gas, with demand for natural gas expected to grow in Botswana, Malawi, Mozambique, Zambia, and Zimbabwe due to the increase of gas-fired power station development, vehicle and related downstream industries and domestic consumption.

The joint development agreement (JDA) between SacOil and the Institute will evaluate the technical and commercial feasibility of the pipeline. Lobito-Lusaka-corridor.pdf. Microsoft Word - Transport Sector Plan V3 final - SADC_RIDMP_Transport_1008.pdf. Mozambique, Swaziland and South Africa connected by railways. October 30th, 2014 News The Mozambique government is examining the possibility of building a railway linking the country to the South African province of Kwazulu-Natal, passing through Swaziland, said the director of the National Institute of Tourism (Inatur). 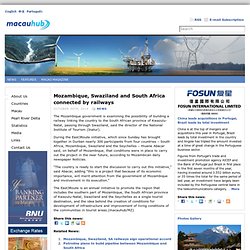 During the East3Route initiative, which since Sunday has brought together in Durban nearly 300 participants from four countries – South Africa, Mozambique, Swaziland and the Seychelles – Hiuane Abacar said, on behalf of Mozambique, that conditions were in place to carry out the project in the near future, according to Mozambican daily newspaper Notícias. “The country is ready to start the discussion to carry out this initiative,” said Abacar, adding “this is a project that because of its economic importance, will merit attention from the government of Mozambique and involvement in its execution.” Symrise opens $3m vanilla extraction facility in Madagascar.

Symrise has opened a new €3m ($3.83m) vanilla extraction facility in Benavony, Madagascar - the latest milestone in its strategy to “establish the entire value chain for vanilla in its source country”. 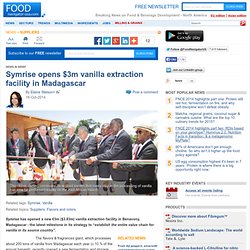 The flavors & fragrances giant, which processes about 200 tons of vanilla from Madagascar each year (c.10 % of the annual harvest), recently opened a new fermentation and storage complex in Antalaha, Madagascar. The new extraction facility in Benavony means that every step in the processing of vanilla can now be performed locally, said Symrise CEO Dr Jürgen Bertram. “With this new plant, we are completing the cycle of responsible vanilla production on site. Sadc unveils infrastructure project fund. REGIONAL bloc Sadc has unveiled a fund in which member states and implementing agencies can tap into for infrastructure projects. 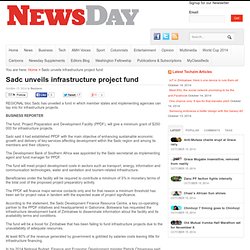 The fund, Project Preparation and Development Facility (PPDF), will give a minimum grant of $250 000 for infrastructure projects. Sadc said it had established PPDF with the main objective of enhancing sustainable economic growth and delivery of key services affecting development within the Sadc region and among its members and their citizenry. The Development Bank of Southern Africa was appointed by the Sadc secretariat as implementing agent and fund manager for PPDF. The fund will meet project development costs in sectors such as transport, energy, information and communication technologies, water and sanitation and tourism-related infrastructure. Angola-Namibia currency deal. The Governor of the Bank of Namibia, Ipumbu Shiimi and Dr Jose de Lima Massano, Governor of Banco Nacional de Angola signed a Currency Conversion Agreement between the two central banks. 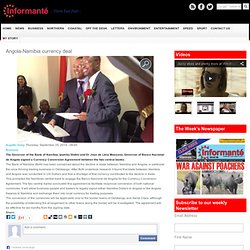 The Bank of Namibia (BoN) has been concerned about the decline in trade between Namibia and Angola, in particular the once thriving trading business in Oshikango. After BoN undertook research it found that trade between Namibia and Angola was conducted in US Dollars and that a shortage of that currency contributed to the decline in trade. This prompted the Namibian central bank to engage the Banco Nacional de Angola for the Currency Conversion Agreement. The two central banks concluded this agreement to facilitate reciprocal conversion of both national currencies. It will allow business people and traders to legally export either Namibia Dollars to Angola or the Angola Kwanza to Namibia and exchange them into local currency for trading purposes. SADC to have own payment system.

A committee of central bank governors in the Southern African Development Community (SADC) is working on a payment system that will facilitate transactions and money transfers across the region, APA learnt here Wednesday.Bank of Namibia governor Ipumbu Shiimi told The Southern Times in a wide-ranging interview that plans for a regional payment systems would be operational in two years and would eliminate routing of transactions which originates locally via European or American financial institutions. 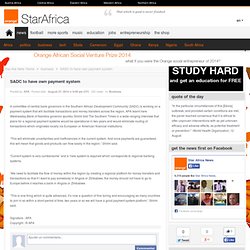 “This will eliminate uncertainties and inefficiencies in the current system. And once payments are guaranteed, this will mean that goods and products can flow easily in the region,” Shiimi said. “Current system is very cumbersome” and a “new system is required which corresponds to regional banking systems. Southern Africa: Logistics Hub for SADC Envisaged. A STATE-OF-THE-ART logistics hub for Southern African countries is envisaged in Namibia, next year. 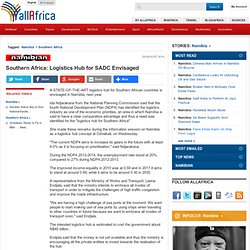 Ida Ndjarakana from the National Planning Commission said that the fourth National Development Plan (NDP4) has identified the logistics industry as one of the economic priorities, an area in which Namibia is said to have a clear comparative advantage and thus a need was identified for the "logistics hub for Southern Africa". She made these remarks during the information session on Namibia as a logistics hub concept at Oshakati, on Wednesday.

"The current NDP4 aims to increase its gears in the future with at least 9.0% as it is focusing on prioritisation," said Ndjarakana. During the NDP4 2013-2014, the unemployment rate stood at 20%, compared to 27% during NDP4 2012-2013. The improved income equality in 2010 was at 0.59 and in 2017 it aims to stand at around 0.49, while it aims to be around 0.30 in 2030. "We are having a high challenge of sea ports at the moment. Southern Africa: SADC Ready to Establish Africa's Largest Integrated Market. By Kizito Sikuka Southern Africa is committed to finalize negotiations to establish Africa's largest integrated market covering 26 countries in eastern and southern Africa. The proposed Tripartite Free Trade Area involves three regional economic communities namely the Common Market for Eastern and Southern Africa (COMESA), East African Community (EAC) and the Southern African Development Community (SADC).

According to a roadmap developed by COMESA-EAC-SADC, the Grand FTA is expected to come into force by 2016. If this happens, intra-regional trade is expected to increase sharply and deepen regional integration through improved investment flows and enhanced competition. In fact, this arrangement will create a combined population of some 600 million people covering half of the member states of the African Union (AU) and a Gross Domestic Product of about US$1 trillion.

"As SADC, I believe we are ready for the tripartite arrangement. Southern Africa: SADC - 'Persian Gulf' of Minerals (Page 1 of 3) Angola Covers 1 247 000 km² in the western region of Southern Africa and is the second largest country south of the Sahara after the Democratic Republic of Congo. Angola's population is estimated at 17 992 000 (latest census) and it gained independence from Portugal in 1975. The oil industry is the backbone of the economy, but oil and fishing are the main sectors that have attracted foreign investment in recent years. Angola's economy has been devastated by decades of civil war, which negatively impacted on sectors such as agriculture, iron mining and diamonds. Angola also has significant tourism potential. Southern Africa: SADC Targets U.S.$4 Billion High-Priority Energy Projects. Photo: UN Photo/Sylvain Liechti A peacekeeper with the UN Organization Stabilization Mission in the Democratic Republic of the Congo (file photo).

By Joseph Ngwawi. Mauritius: Island set to become''High Income Country'' SADC Plano Director Regional de Infra-Estrutura - Plano do Sector de Transportes - SADC-Plano-Director-Regional-de-Infra-Estrutura-Plano-do-Sector-de-Transportes-Part-2.pdf. Infrastructure Components of the North South Corridor.pdf. Truck stops planned along Trans Kalahari Corridor. The governments of South Africa, Botswana and Namibia aim to boost regional trade by improving the efficiency of the Trans Kalahari Corridor network via the establishment of a number of new truck stops along the transport corridors spanning all three countries. The viability of establishing the truck stops has been confirmed by a feasibility study and investors are now investigating the opportunities for involvement, according to the Trans Kalahari Corridor Secretariat (TKCS). The network consists of the Trans Kalahari, the Trans Cunene and the Walvis Bay - Ndola - Lubumbashi (Trans Caprivi) Corridors, linking the three countries with each other and with Angola and Zambia.

With Valentine’s day around the corner a lot of romantics are scurrying in a last minute ditch to find that perfect gift.The tech-savy might want to try online but one of the problems that any newbie Zimbabwean online shopper quickly learns is that household names like Amazon, Sears, BestBuy, Ralph Lauren and Ebay were not meant for them. Nacala_Assessment_Final(42710_V2) - Nacala-Corridor-Assessment-Final-USAID-AgriFuturo-Project-April-2010.pdf. 2013SAGB_FR_02ENG.pdf. Maurice envisage de profite de l'intérêt croissant des pays asiatiques pour le "seafood hub"

Botswana, Namibia to Sign $11 Billion Railway Deal on April 20. Botswana and Namibia will sign an agreement for a $11 billion transnational railway on April 20, clearing the way for tendering for the project, Botswana’s Transport and Communications Minister Nonofo Molefhi said. “Bids for potential financing will be opened as soon as we have signed the agreement,” Molefhi said at a coal conference today in Botswana’s capital, Gaborone. The agreement will cover all aspects including legal matters, he said. Southern African countries are investing to expand their railways to meet growing global demand for coal, led by China. Known as the Trans-Kalahari Railway, the 1,500-kilometer (932- mile) line will run from landlocked Botswana’s coalfields in the south and east to the Namibian port of Walvis Bay in the west.