Somalia Expected Grow Faster than United States in 2016. Mogadishu (HAN) July 30, 2015 –Geeska Markets – Somalia may increase imports by about a quarter over the next three years to support a recovering economy, the International Monetary Fund said. 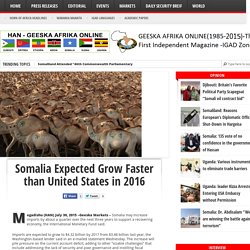 Imports are expected to grow to $4.32 billion by 2017 from $3.48 billion last year, the Washington-based lender said in an e-mailed statement Wednesday. The increase will pile pressure on the current account deficit, adding to other “sizable challenges” that include addressing the lack of security and poor governance and instilling fiscal discipline, Rogerio Zandamela, the IMF mission chief for Somalia, said by phone. Somalia is rebuilding an economy destroyed by more than two decades of civil war that started with the fight for control after the ousting of dictator Mohamed Siad Barre and the emergence of the al-Shabaab Islamist insurgency. Malawi plastic paper ban: A misery to people, a refuge to the environment. Untitled. Horn of Africa's Djibouti dreams of becoming 'new Dubai'

How countries will benefit from Africa's Tripartite FTA. Hurray! Gamechanger Djibouti-Ethiopia railway ready, will cut goods travel time from two days to 10 hours. THE leaders of Djibouti and Ethiopia will oversee the completion of a railway linking their two capitals on Thursday, with the ambition that the link might eventually extend across the continent to West Africa. 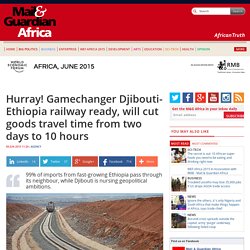 Djibouti’s President Ismail Omar Guelleh and Ethiopia’s Prime Minister Hailemariam Desalegn will attend the ceremonial laying of the last track in the 752-kilometre (481-mile) railway, financed and built by China, linking the port capital of Djibouti with landlocked Ethiopia’s capital Addis Ababa. The first scheduled train is expected to use the desert line in October, reducing transport time between the capitals to less than 10 hours, rather than the two days it currently takes for heavy goods vehicles using a congested mountain road. “Some 1,500 trucks use the road every day between Djibouti and Ethiopia. In five years, this figure will rise to 8,000,” said Abubaker Hadi, chairman of Djibouti’s Port Authority. “This is not possible, this is why we need the railway.” 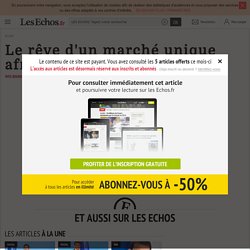 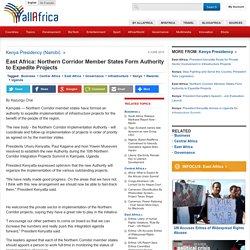 The new body - the Northern Corridor Implementation Authority - will coordinate and follow-up implementation of projects in order of priority as agreed on by the member states. Presidents Uhuru Kenyatta, Paul Kagame and host Yoweri Museveni resolved to establish the new Authority during the 10th Northern Corridor Integration Projects Summit in Kampala, Uganda. The Geopolitical Impact of the Nile. Index1. Kazungula Bridge project sparks a railways revolution in COMESA states. GABORONE: The proposed construction of the long-awaited Kazungula Bridge over the Zambezi River by Botswana and Zambian governments seems to have sparked a railways construction and reconstruction revolution particularly among COMESA member countries. 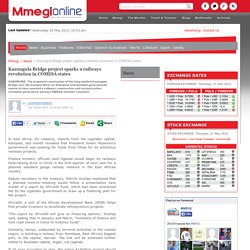 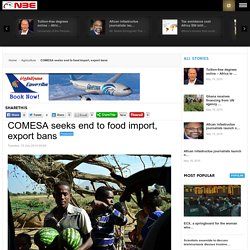 Food import and export bans have impacted negatively in access to affordable food in the region, as countries with more surplus of food are unable to export to member countries that may be facing food deficit because of the haphazard food import and export bans. The situation has meant that the region has failed to leverage on better food production in some member countries that could be export to countries experiencing food deficit. Members of Parliament drawn from 19 member countries of the Common Market for Eastern and Southern Africa (COMESA) will meet in Lusaka, Zambia on 11-13 August to deliberate on the issue and come up with policy recommendations. New ice plant to boost Somaliland fisheries sector. The recent delivery of a new ice plant to Somaliland should provide a major boost for local fisheries by ensuring catches are landed in premium condition, and enabling the development of new markets. 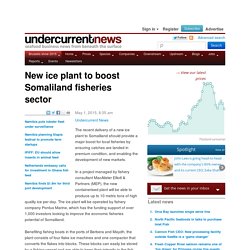 In a project managed by fishery consultant MacAlister Elliott & Partners (MEP), the new containerised plant will be able to produce up to 10 metric tons of high quality ice per day. The ice plant will be operated by fishery company Pontus Marine, which has the funding support of over 1,000 investors looking to improve the economic fisheries potential of Somaliland. New ice plant to boost Somaliland fisheries sector. Coastweek - The most from the coast. NAIROBI -- The construction of the 601 kilometre road linking Kenya’s northwest town of Lesseru to Nakodok/Nadapal border with South Sudan will begin in 2016, Kenyan officials said on Monday. 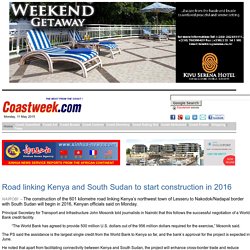 Principal Secretary for Transport and Infrastructure John Mosonik told journalists in Nairobi that this follows the successful negotiation of a World Bank credit facility. You may not have heard of Djibouti, but it's about to launch itself on the global stage in a big way. The tiny African state of Djibouti appears to be emulating several chapters of Dubai’s extraordinary growth story; the similarities between the two are remarkably striking. 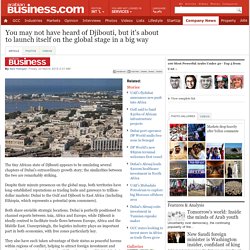 Despite their minute presences on the global map, both territories have long-established reputations as trading hubs and gateways to trillion-dollar markets: Dubai to the Gulf and Djibouti to East Africa (including Ethiopia, which represents a potential 90m consumers). Both share enviable strategic locations. Dubai is perfectly positioned to channel exports between Asia, Africa and Europe, while Djibouti is ideally centred to facilitate trade flows between Europe, Africa and the Middle East. Unsurprisingly, the logistics industry plays an important part in both economies, with free zones particularly key. “This year we will enjoy 6.5 percent growth in GDP,” Finance Minister Ilyas Dawaleh (pictured left) tells Arabian Business during a recent visit to Dubai. “In 2014, we observed 5.7 percent [growth] in GDP. Djibouti seeks to tap volcanic energy to reduce power costs. ASAL-FIALE, Djibouti — Abdourahman Omar Haga moves his hand over a fissure in a lava lake on the edge of Djibouti's Ghoubbet el Kharab sea, trying to detect hot vapors invisible to the naked eye in the searing midday sun. 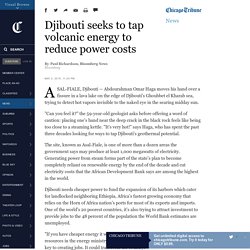 WB Set To Fund Construction Of Eldoret-Lodwar Highway. A corridor of opportunity? The LAPSSET project in local context. December 10 2014: A significant new infrastructure project linking Kenya, Ethiopia and South Sudan then later Uganda Rwanda, Central and Western Africa is under way. According to Kisuke Ndiku the project could bring huge opportunities for the region, but only if proper efforts are made to engage local communities. The Lamu Port and New Transport Corridor Development to South Sudan and Ethiopia (LAPSSET) project is a transport and infrastructure project involving Kenya, Ethiopia and South Sudan. The project is bringing together stakeholders and actors drawn from a wide range of investors, donors and funders; among them governments, the UN, bi-lateral multilateral, private, civil society and humanitarian agencies.

It will be implemented in a region including some of region’s most fragile zones, in which the effects of climate variability and climate change have had a big impact and where poverty rates are among the highest in the three countries. Livelihoods – an opportunity or a cost? One visa for East African travel. Tanzania has joined three countries in the East African Community (EAC) in a single tourist visa initiative.

Tanzania joins East African Community in a single tourist visa initiative. PHOTO: in2eastafrica The original countries involved in the initiative, which allows visitors to travel to certain countries on one visa, were Kenya, Uganda and Rwanda. Tanzania is newest country to join. Waturi Matu, coordinator at Kenya Tourism Federation, says part of the delay in Tanzania joining the agreement was lack of infrastructure. “What has been lacking has been political goodwill and I think certain countries needed to get themselves prepared for the implementation.

Research has shown that discoveries in the last few years are more than that of any other region in the world, and the boom is expected to continue for the next five years. This impressive position is however becoming less significant as global oil prices continue to fall. A continued decline threatens the region’s economic prospects. Multiple Oil and gas discoveries, better economic prospects The ongoing market integration by the East African Community (EAC), which comprises Burundi, Kenya, Rwanda, Tanzania and Uganda, has contributed to the region becoming an attractive investment destination. Facilitating-Cross-Border-Trade.pdf. Les frontières: Lieux de division ou passerelles d'échanges? East Africa: Ethiopia to Join COMESA's Free Trade Area. By Fasika Tadesse The government of Ethiopia is on the move of joining the Common Market for Eastern and Southern Africa (COMESA) Free Trade Area (FTA) which enables the country to have preferential trade interaction between member countries.

The FTA covers core issues of tariff liberalization, rules of origin, customs procedures and simplification of customs documentation, transit procedures among other issues. This decision came from following findings and recommendations of a research titled "Ethiopian Industrial Competitiveness" conducted by the COMESA and the Ministry of Finance & Economic Development (MoFED). The research recommended that the country is ready to join the free trade area because the county's competitiveness in terms of quality and price improved from the previous times, according to Geremew Ayalew director general of trade relations & negotiations at the Ministry of Trade (MoT). "The parliament has a positive response for the arrangement," said Germew. East Africa: Safaricom's M-Ledger Mobile APP to Enable Users Track M-Pesa Transactions. Safaricom has announced the launch of M-Ledger, an Android based application that provides subscribers on the company's network with a simple and easy to use financial journal to track and monitor their M-PESA transactions.

M-Ledger has been developed in partnership with a local start-up Dynamic Data Systems. "We strive to be the first to market with pioneering products that help transform the lives of our customers - but we are aware that we cannot innovate alone. Our partnership with Dynamic Data Systems signals our increasing commitment to build capacity in the local start-up community," said Bob Collymore, CEO, Safaricom. With the rapid growth in the use of M-PESA by organizations as a payments portal, M-Ledger promises to provide an easily accessible accounting service for users by allowing them to view and manage all their past transactions on a single view from their mobile phone. Egypt will host African economic blocs to create free trade zone: Industry minister. Minister of Industry and Foreign Trade Mounir Fakhry Abdel Nour(DNE Photo) Djibouti Plans LNG, Oil Terminals to Develop Regional Trade Ties. Djibouti's $1.5 Billion Economy Has $5 Billion At Its Shores: 3 Companies Already There.

Ethiopia-to-Djibouti Rail to Be Complete in a Year, PM Says. An electrified rail link from Ethiopia’s capital along its main trade route to neighboring Djibouti will be completed by October 2015, Prime Minister Hailemariam Desalegn said. The Railways Corp. project, funded with a $1.6 billion advance from the Export-Import Bank of China and by Ethiopia’s government, is half complete, he said yesterday in the capital, Addis Ababa.

The government of the Democratic Republic of Congo (DRC) has expressed the decision of Tanzania to open a Tanzania Ports Authority (TPA) liaison office in Lubumbashi town, Katanga Province as a patriotic and progressive one. The decision will not only simplify the work for DRC traders, but also will improve lives for the people of DRC, according to the Minister of Transport, Katanga Province, Kahozi Sumba. “This office means a lot for the citizens of DRC, we thank a lot the government of Tanzania for this noble decision,” he said after the inauguration done by the Minister of Transport, Dr. Harrison Mwakyembe. Minister Sumba said DRC government is optimistic that problems that were facing their business community using Dar es Salaam port will considerably be reduced and ultimately finished. Tanzania takes lead in minting East African millionaires. Zambia is no longer Top African Copper Miner, Chamber of Mines disputes the figure. East Africa to ‘become oil and gas hub by end of this decade’