Oil shocks and their consequences

Naomi Klein: This Changes Everything - video. Recession, retrenchment, revolution? Impact of low crude prices on oil powers. A glut of oil, the demise of Opec and weakening global demand combined to make 2015 the year of crashing oil prices. 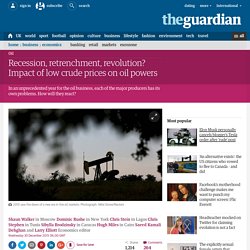 The cost of crude fell to levels not seen for 11 years – and the decline may have further to go. There have been four sharp increases in the price of oil in the past four decades – in 1973, 1979, 1990 and 2008 – and each has led to a global recession. By that measure, a lower oil price should be positive for the world economy, with lower fuel costs for consumers and businesses in those countries that import crude outweighing the losses to producing nations. But the evidence since oil prices started falling from their peak of $115 a barrel in August 2014 has not supported that thesis – or not yet.

Oil producers have certainly felt the impact of the lower prices on their growth rates, their trade figures and their public finances butthere has been no surge in consumer spending or business investment elsewhere. Saudi Arabia There have been some signs of tension. Nigeria Russia. Oil Prices: What’s Behind the Drop? Simple Economics. Global Oil and Gas Industry – SAGE Business Researcher. Bibliography Books Coronil, Fernando, “The Magical State: Nature, Money and Modernity in Venezuela,” University of Chicago Press, 1997. 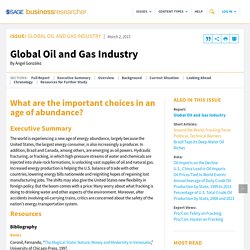 Coronil, who was a professor of anthropology at the University of Michigan, tells how the discovery of oil shaped Venezuelan society and culture. Gold, Russell, “The Boom: How Fracking Ignited the American Energy Revolution and Changed the World,” Simon & Schuster, 2014. Gold, a veteran Wall Street Journal energy reporter, recounts the story of hydraulic fracturing and its impact. Marcel, Valerie, “Oil Titans: National Oil Companies in the Middle East,” Brookings Institution Press, 2006.

Yergin, Daniel, “The Prize: The Epic Quest for Oil, Money and Power,” Simon & Schuster, 1991, 1992, 2008. Articles Gilbert, Daniel, and Justin Scheck, “BP Is Found Grossly Negligent in Deepwater Horizon Disaster,” The Wall Street Journal, Sept. 4, 2014, BP got handed a big bill for negligence in its massive Gulf of Mexico oil spill. Reports and Studies The Next Step U.S. China’s ‘Inconvenient Truth’ Documentary about the Airpocalypse. The world’s greatest female fighter, who recently annihilated her opponent in a record 14 seconds, opens up her mother’s lessons, Laila Ali, Eminem, and her Hollywood takeover. 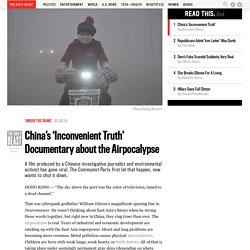 Fourteen seconds. For us mere mortals, it’s the time it takes to, say, wash our hands or lace up our sneakers. But for UFC champion Ronda Rousey, that’s how long it takes her to thoroughly kick someone’s ass. On February 28, current champ Rousey squared off against No. 1 contender Cat Zingano at the Staples Center for the UFC Women’s Bantamweight Championship. Zingano was no joke, compiling a stellar 9-0 record as well as the distinction of being the first woman ever to win a UFC fight by TKO.

“I didn’t think I could break it,” Rousey says of her 16-second KO. After amassing a 4-0 record in the now-defunct Strikeforce, Rousey became the first female fighter to sign with Dana White’s UFC in November 2012, and was later announced as the first UFC Women’s Bantamweight Champion. That preparation includes acting. The Economist explains: Why the oil price is falling. THE oil price has fallen by more than 40% since June, when it was $115 a barrel. 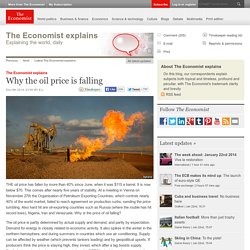 It is now below $70. This comes after nearly five years of stability. At a meeting in Vienna on November 27th the Organisation of Petroleum Exporting Countries, which controls nearly 40% of the world market, failed to reach agreement on production curbs, sending the price tumbling. Also hard hit are oil-exporting countries such as Russia (where the rouble has hit record lows), Nigeria, Iran and Venezuela. Le Dessous des Cartes GAZ DE SCHISTE (1/2) : UNE ÉNERGIE ALTERNATIVE ? Shale gas fracking – the facts and figures.