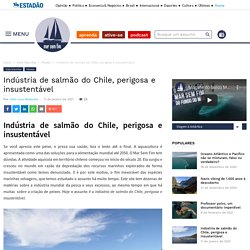 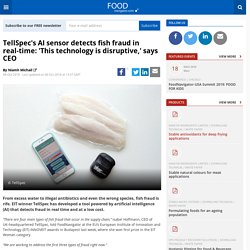 “We are working to address the first three types of fraud right now. "​ Number one on the list of ways to adulterate fish is by injecting it with water before it is frozen. This can add up to 50% to its weight and frozen fish that contains more than 10% is considered to have been adulterated. The second is species substitution whereby fish is intentionally mislabelled. Farmed Salmon = Most Toxic Food in the World. Fish are an important part of the ecosystem and the human diet. Farmed Salmon = Most Toxic Food in the World. Farmed Salmon Is One Of The Most Toxic Foods In The World - See Why You Should Stop Eating It - Goodfullness. Farmed Salmon Is Simply Not Healthy to... - Captain Paul Watson. Thousands of Atlantic Salmon Escape Factory Farm, Threaten Wild Populations With Disease - Mercy For Animals. A net at a fish factory farm in Washington failed last week, causing thousands of nonnative Atlantic salmon to get loose just off the state's northwestern San Juan Islands. 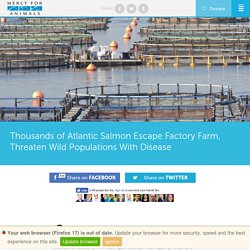 NPR reported that the farm's net pen failed when an anchor broke loose and the floating metal walkways collapsed. Those nearby said it looked like hurricane debris. There were approximately 305,000 Atlantic salmon being held in the pen. Officials are unsure of the exact number of salmon who escaped and the reason why the pen’s anchor broke loose. How Seafood Fraud Tricks Consumers Into Buying Lower Quality Salmon. Great Barrier Reef Obituary Goes Viral, To The Horror Of Scientists. Agencies say 22% of Barrier Reef coral is dead, correcting 'misinterpretation' Almost a quarter of the coral on the Great Barrier Reef is now dead, according to two government agencies, with the previously pristine remote northern sections worst affected. 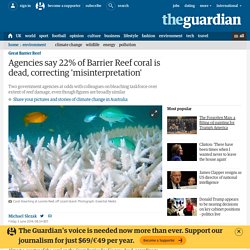 The data from in-water surveys, released on Friday afternoon, was from the two agencies that were part of the national coral bleaching taskforce. Earlier this week their non-government partner – the Australian Research Council centre of excellence for coral reef studies – released broadly similar data. Guardian Australia understands the three data sets were planned for release together, but the two government agencies pulled out at the last minute, unhappy with the emphasis of the associated release. Seattle’s Young Salmon Are Laced With Our Antidepressants. 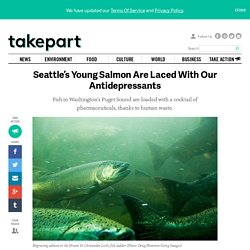 No, but they’re getting them anyway, thanks to the tons of drugs and personal care products that make their way from our well-stocked medicine chests into the nation’s sewage systems and through ineffectual wastewater treatment plants. In a new study published in the journal Environmental Pollution, researchers caught and analyzed juvenile chinook salmon and a small fish called the staghorn sculpin in three Puget Sound estuaries, two of which had wastewater treatment plants nearby. What they found was a staggering pharmacopeia of contaminants, both in the water and in the fish. Of the hundreds of chemicals likely present in the Puget Sound ecosystem, only a small percentage are monitored or regulated, the study authors found, and there is little or no environmental toxicity information for the vast majority of these compounds. Salmon Confidential, Documentary About Salmon Farms in Canada & Diseased Salmon. Ecosurf - Entenda os "Crimes de pesca"

A farsa do Salmão! Como nos enganam! Todos devem ver isto! A farsa do Salmão! Farmed Salmon — one of the most toxic foods in the world : Healthy Holistic Living. Nicolas Daniel’s documentary “Fillet-Oh-Fish” takes a critical look at the fish industry, featuring exclusive footage from fish farms and factories across the globe. 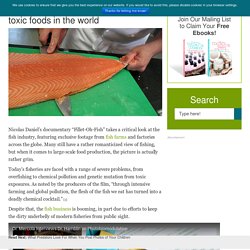 Many still have a rather romanticized view of fishing, but when it comes to large-scale food production, the picture is actually rather grim. Today’s fisheries are faced with a range of severe problems, from overfishing to chemical pollution and genetic mutation from toxic exposures. As noted by the producers of the film, “through intensive farming and global pollution, the flesh of the fish we eat has turned into a deadly chemical cocktail.” [1] Salmão criado em cativeiro deveria ser cinza, mas são tingidos de rosa para atrair e agradar consumidores. Isso ocorre pelo mesmo motivo pelo qual os flamingos também são: suas dietas, que consistem em krill e camarão. 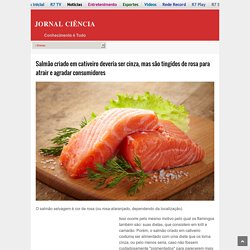 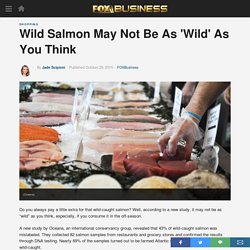 Well, according to a new study, it may not be as “wild” as you think, especially, if you consume it in the off-season. A new study by Oceana, an international conservancy group, revealed that 43% of wild-caught salmon was mislabeled. They collected 82 salmon samples from restaurants and grocery stores and confirmed the results through DNA testing. Nearly 69% of the samples turned out to be farmed Atlantic salmon being sold as wild-caught. “Americans might love salmon, but as our study reveals, they may be falling victim to a bait and switch,” said Beth Lowell, Senior Campaign Director at Oceana. “When consumers opt for wild-caught U.S. salmon, they don’t expect to get a farmed or lower-value product of questionable origins. Dr. Why You Should Never Eat Tilapia. Tilapia has become the ubiquitous fish in America today. 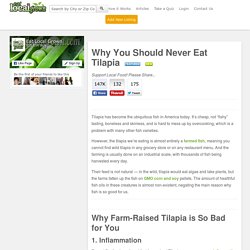 It’s cheap, not “fishy” tasting, boneless and skinless, and is hard to mess up by overcooking, which is a problem with many other fish varieties. However, the tilapia we’re eating is almost entirely a farmed fish, meaning you cannot find wild tilapia in any grocery store or on any restaurant menu. And the farming is usually done on an industrial scale, with thousands of fish being harvested every day. Their feed is not natural — in the wild, tilapia would eat algae and lake plants, but the farms fatten up the fish on GMO corn and soy pellets.

The amount of healthful fish oils in these creatures is almost non-existent, negating the main reason why fish is so good for us. 1.