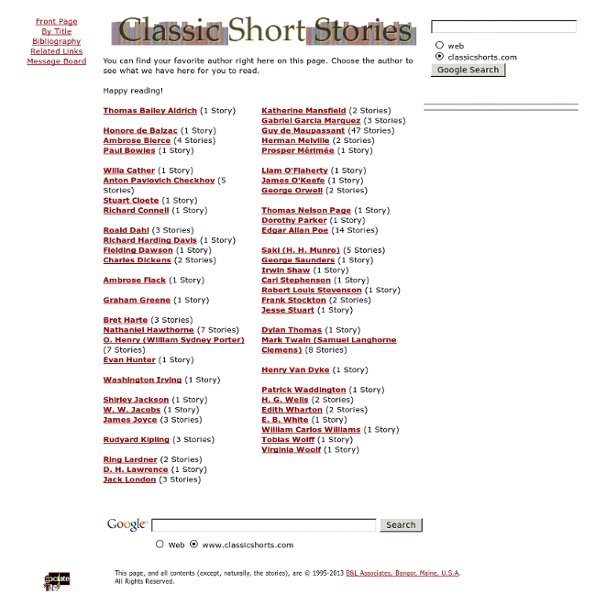 Storyville: Top Ten Best Short Stories Ever How dare I make a list of the top ten short stories ever, right? Who the hell do I think I am? Well, obviously I’m a fan of fiction, of the short story form. I’m also an author. And I now have my MFA in Creative Writing as well. Does that make me an authority?

Shakespearean Sonnet Cummings Guides Home..|..Shakespeare Videos..|..Shakespeare Books .By Michael J. Cummings © 2003. The Shakespearean Sonnet: Overview ........William Shakespeare wrote one hundred fifty-four sonnets. 10 Websites Where You Can Enjoy Reading Short Stories and Flash Fiction Do you feel that shorter attention spans are giving short stories a leg up? I personally don’t feel so, because a story well-told is a story well-enjoyed, short or stretched. Short stories have always been a popular form of writing.

short stories at east of the web A game of Scrabble has serious consequences. - Length: 4 pages - Age Rating: PG 10 Free Stories by George Saunders, Author of Tenth of December, “The Best Book You’ll Read This Year” For writers and serious readers, George Saunders is anything but a newcomer. Saunders published his first short story with The New Yorker back in 1992, and his new stories have regularly debuted in the magazine's Fiction section ever since. Over the years, he has gained the reputation of being a "writer's writer," with authors like Tobias Wolff saying about Saunders: “He’s been one of the luminous spots of our literature for the past 20 years.” But despite his literary accomplishments, and despite winning the prestigious MacArthur award in 2006, George Saunders never quite became a household name until January 6 of this year. On that day, The New York Times published an article with the title, "George Saunders Has Written the Best Book You’ll Read This Year," a pretty bold declaration given that 2013 still had 359 days to go.

WILLIAM SHAKESPEARE SONNETS with text of each sonnet William Shakespeare SonnetsSonnets are fourteen-line lyric poems, traditionally written in iambic pentameter - that is, in lines ten syllables long, with accents falling on every second syllable, as in: "Shall I compare thee to a summer's day?". Sonnets originated in Italy and were introduced to England during the Tudor period by Sir Thomas Wyatt. Shake-speare followed the more idiomatic rhyme scheme of sonnets that Sir Philip Sydney used in the first great Elizabethan sonnets cycle, Astrophel and Stella (these sonnets were published posthumously in 1591). Sonnets are formal poems and consist of 14 lines (3 quatrains and a couplet) Poems may be accessed by clicking the above Poems link for texts of the poems of William Shakespeare - Venus and Adonis, Rape of Lucrece, Lover's Complaint and Phoenix and the Turtle The Most Popular William Shakespeare Sonnets!The most popular sonnets are:

10 best short-story collections of 2015 Posted by Trisha on December 03, 2015 This year was a stellar one for short fiction. In addition to releases from celebrated practitioners of the form, like Kelly Link and Edith Pearlman, it also saw the emergence of fresh, exciting voices—and a short story collection even managed to nab the National Book Award. These 10 collections were standouts for us. Almost Famous Women by Megan Mayhew Bergman In her first collection of stories, Birds of a Lesser Paradise (2012), Megan Mayhew Bergman focused on the relationships between humans and animals.

The Literary Maven: 13 Short Stories for Engaging Secondary Students & Teaching Literary Elements Don't let your literature anthology dictate the short stories you read with your middle school and high school students. There are so many wonderful short stories out there, many of which can be used to teach a variety of literary elements and paired with other texts. Here's 13 of my favorites.1. The Sniper by Liam O'Flaherty Hares in the Old Plantation: a short story by Kevin Barry Illustration by Laura Carlin Listen – There’s a lock-in at the Connaught Arms, and every melodious old soak in town is inside the place, wall-eyed with drink and songful as crows – it’s three in the morning – and the liquid drunken notes float off and above the town – there are no women to be heard – and from the dark of the alleyway I can name each voice as it rises and taunts, and who have we now, cresting the happy babble, but Mr Cremins – Mr Teddy Cremins of the square jaw and the emotional shoulders – and he rants directions to the Highwood quarry at the top of his burly throttle:

An Analysis of Shakespeare's Sonnets and Sonnet Paraphrase in Modern English Shakespeare's Sonnets The Sonnets are Shakespeare's most popular works, and a few of them, such as Sonnet 18 (Shall I compare thee to a summer's day), Sonnet 116 (Let me not to the marriage of true minds), and Sonnet 73 (That time of year thou mayst in me behold), have become the most widely-read poems in all of English literature. Here you will find the text of each Shakespearean sonnet with commentary for most. More to Explore 9 classic horror stories you can read right now 1. The Legend of Sleepy Hollow, by Washington Irving (1820) There's a good chance you read Washington Irving's classic short story in high school. But the surprise success of Fox's new TV series loosely based on the story is a great excuse to go back and reread the original.

London Short Fiction: Mud Man Continuing our series of short fiction set in, or influenced by London. This week’s story by Melaina Barnes is the winner of our competition with the British Academy’s Literature Week to find a new modern fairy tale for London. To explore the Literature Week programme — running 11-17 May — and register for events visit the British Academy’s website.