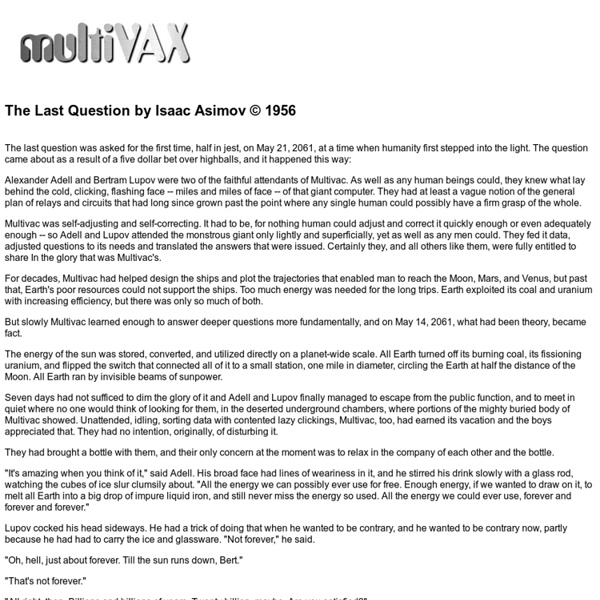 The last question was asked for the first time, half in jest, on May 21, 2061, at a time when humanity first stepped into the light. The question came about as a result of a five dollar bet over highballs, and it happened this way: Alexander Adell and Bertram Lupov were two of the faithful attendants of Multivac. As well as any human beings could, they knew what lay behind the cold, clicking, flashing face -- miles and miles of face -- of that giant computer. They had at least a vague notion of the general plan of relays and circuits that had long since grown past the point where any single human could possibly have a firm grasp of the whole. Multivac was self-adjusting and self-correcting. For decades, Multivac had helped design the ships and plot the trajectories that enabled man to reach the Moon, Mars, and Venus, but past that, Earth's poor resources could not support the ships. The energy of the sun was stored, converted, and utilized directly on a planet-wide scale. "Sure you are.

Top 10 Space-Saving Household Projects Whether you live in a tiny apartment or just have too much stuff, there's likely a lot of space you aren't using, like your walls, your ceilings, or the nooks and crannies in your furniture. Here's how to use it most efficiently.P 10. Hang Your Bike on the WallP SExpand If you're in an apartment, you probably don't have a lot of great places to store your bike outside, and it can take up a lot of floor space just sitting around. 9. If you've already exhausted the storage nooks under your bed, the ceiling is ripe with unused space. 8. If floor space is at a premium, you can maximize it by moving those bookshelves up onto the wall, freeing up the floor for storing other things (and making it easier to clean). 7. Whether you're trying to pack light for a trip or just fit as many clothes into your dresser as you can, proper folding technique is key. 6. Most animals are pretty small, but it seems like their stuff takes up as much space as yours. 5. 4. 3. 2. 1.

John Cleese on the 5 Factors to Make Your Life More Creative by Maria Popova “Creativity is not a talent. It is a way of operating.” Much has been said about how creativity works, its secrets, its origins, and what we can do to optimize ourselves for it. Space (“You can’t become playful, and therefore creative, if you’re under your usual pressures.”)Time (“It’s not enough to create space; you have to create your space for a specific period of time.”)Time (“Giving your mind as long as possible to come up with something original,” and learning to tolerate the discomfort of pondering time and indecision.)Confidence (“Nothing will stop you being creative so effectively as the fear of making a mistake.”)Humor (“The main evolutionary significance of humor is that it gets us from the closed mode to the open mode quicker than anything else.”) A few more quotable nuggets of insight excerpted below the video. Creativity is not a talent. We need to be in the open mode when pondering a problem — but! Thanks, Simon Donating = Loving Share on Tumblr

Holon (philosophy) A fractal is close to the idea of holon, as it is a part that represents a whole at the same time.[citation needed] Do seeds contain trees or do trees contain seeds? We could say both are true, because 'trees and seeds' is an example of a holon. Parable of the two watchmakers There once were two watchmakers, named Bios and Mekhos, who made very fine watches. The watches consisted of about 1000 parts each. Now, the watchmakers were each disturbed at the same rate of once per hundred assembly operations. Herbert Simon, quoted by Andrew Koestler (1967) A holon is maintained by the throughput of matter–energy and information–entropy, connected to other holons; it is a whole in itself but also, at the same time, it is nested within another holon and is thus a part of something much larger than itself. The work of modern physicists designed to discover the theory of everything (TOE) is reaching deep into the microcosm under the assumption that the macrocosm is eventually made of the microcosm.