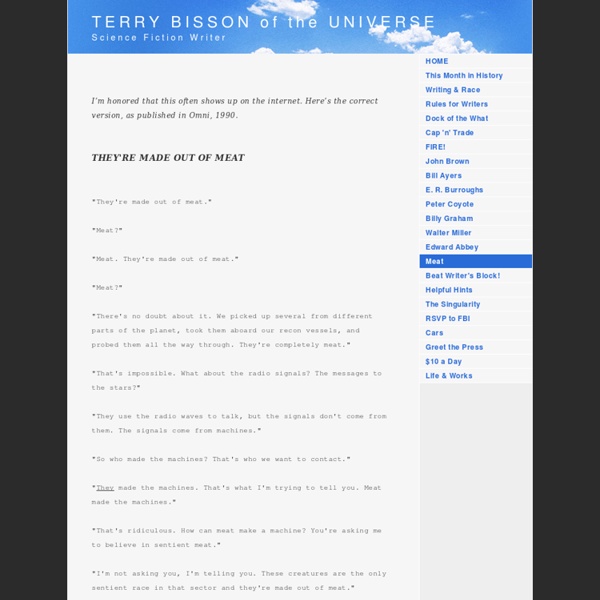 I’m honored that this often shows up on the internet. Here’s the correct version, as published in Omni, 1990. "They're made out of meat." "Meat?" "Meat. "There's no doubt about it. "That's impossible. "They use the radio waves to talk, but the signals don't come from them. "So who made the machines? "They made the machines. "That's ridiculous. "I'm not asking you, I'm telling you. "Maybe they're like the orfolei. "Nope. "Spare me. "Nope. "No brain?" "Oh, there's a brain all right. "So ... what does the thinking?" "You're not understanding, are you? "Thinking meat! "Yes, thinking meat! "Omigod. "Thank you. "Omigod. "First it wants to talk to us. "We're supposed to talk to meat." "That's the idea. "They actually do talk, then. "I thought you just told me they used radio." "They do, but what do you think is on the radio? "Omigod. "Officially or unofficially?" "Both." "I was hoping you would say that." "It seems harsh, but there is a limit. "I agree one hundred percent. "Just one. "That's it."

Interesting High-speed Video Clips 20 Scary Old School Surgical Tools A quick glance at our gallery of some of history’s gnarliest surgical tools will definitely make you thankful for just how far our industry has progressed throughout time. Browse through images and descriptions of surgical tools dating as far back as the 1600’s – a time when surgery was definitely not for the squeamish. You might think your HMO plan is scary, but at least it doesn’t use these vintage surgical instruments…hopefully. Amputation Knife (1700s) Knives used for amputations during the 18th century were typically curved, because surgeons tended to make a circular cut through the skin and muscle before the bone was cut with a saw. By the 1800s, straight knives became more popular because they made it easier to leave a flap of skin that could be used to cover the exposed stump. Amputation Saw (1600s) While some surgeons chose to flaunt their wealth with elaborately decorated saws like this, the crevices in the intricate engravings proved to be a breeding ground for germs.

Todd Lamb Notes From Chris Gallery Welcome to the “ Notes From Chris” gallery. These are notes that I post around New York City from a mysterious man named Chris. Chris wants to do tedious things with people. He also has lots of problems. “ Notes From Chris” is a project started by Todd Lamb in 2008. Seize the Day Seize the Day by Derek Lin Here's a puzzle for you: What do you see in this grid above? What do you think it represents? Okay, it's not a difficult puzzle. "Okay," you ask, "so what's the big deal?" When I look at this grid I get a chill because I'm used to thinking about one year as a long time. This grid is the layout of a typical table blotter calendar that you can find in any office supply store. In any event, confronting the grid and contemplating its meaning is a sobering experience for me. How many more grids do you have? If I am lucky. When you see it this way, you come to the inescapable conclusion that, indeed, life is too short.

Under the Button Decadent Lifestyle Photographer Turns his 91-Year Old Grandma into a Superhero to Cheer Her Up A few years ago photographer Sacha Goldberger found his 91-year-old Hungarian grandmother Frederika feeling lonely and depressed. So to cheer her up, and put a spark back into her life, he turned her into a superhero! He took a series of awesome photographs of her wearing costumes in unusual superhero type posses. "Grandma reluctantly agreed, but once they got rolling, she couldn't stop smiling." Frederika isn't only a superhero in these photos, but she was a real hero during World War II. Frederika was born in Budapest 20 years before World War II. These photos are great, and they definitely put a smile on my face.

Netflix Envelope Doodles Admit it, you've done it. You've taken a Sharpie to a Netflix envelope and doodled the heck out of it. Not just once, but a multitude of times. You've then imagined the expression of the postal worker as the envelope passed through their hands, all with a wide grin on your face. Here are some fun examples of people who publicly admit to doing just that. Above drawn by jovino. From around the web: Above by: jovino Above by: Kill Taupe Above by: {heart} Above by: Garrett Miller Above by: Hugo Seijas Above by: okat Above by: maddieb Above by: Scott Snowden Above by: Sherry Thurner Above by: Joe Justus Above by: Ryan Bucher Above by: Marsha Baker Above by: Audrey Coleman Above by: Lain 3 Above by: Saybel Guzman Above by: Jonathan Palmisano Above by: Julie Zarate We've received so much love for the Netflix post, that we've dedicated an entire mini-site to it.

BEST of BTS | photography by Angus R Shamal A self portrait of Stanley Kubrick with his daughter, Jack Nicholson and the crew @ the set of The Shining. A selection of some of the most awesome Behind-the-scenes shots I’ve seen from some famous movies found at aintitcool.com. Back when set designs were huge and hand made, when special effects where mechanic and photographic and film stars were risking their lives on the set. on the set of Fritz Lang’s Metropolis — the actress inside the Maria robot taking a breather. The Empire Strikes Back - filming the Crawl. Rebel Without A Cause — James Dean, Natalie Wood and director Nicholas Ray. Sesame Street Requiem for a Dream — Jennifer Connelly strapped into a SnorriCam. The Gate (1987) — Giant special effect set. © Craig Reardon The Birds (1961) — Tippi Hedren with Hitchcock. Rio Bravo — Hawks and Angie Dickinson set of Alien. Ghostbusters. Superman on the set of Mothra (1961) - special effects director Tsuburaya Eiji Dr. Tron (1982) — David Warner and Bruce Boxleitner fuck around in costume.

Design Ideas and Tech Concepts - Toxel.com Split Family Faces Cousins: Justine, 29, & Ulric, 29 How much do you and your family members really look alike? Quebec, Canada-based graphic designer and photographer Ulric Collette has created a shockingly cool project where he's exploring the genetic similarities between different members of the same family. By splitting their faces in half and then splicing them together, he creates interesting new people that are sometimes quite normal looking and other times far from it. (Did you notice that Ulric, the photographer, is one-half of some of these pairings? Update 1: We got in touch with Ulric to ask him a few questions about this really intriguing series (that just happened to go viral). Update 2: What happened after Split Family Faces went viral? Mother/Daughter: Francine, 56 & Catherine, 23 Sisters: Catherine, 23 & Veronica, 29 Daughter/Mother: Veronica, 29 & Francine, 56 Sister/Brother: Karine, Dany & XX years, 25 years Brothers, Christopher, 30 & Ulric, 29 Father/Son: Laval, 56 & Vincent, 29