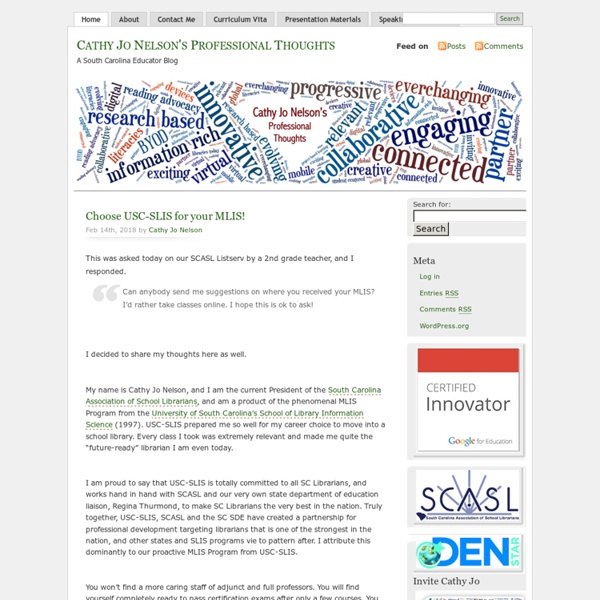 In ’91 or so when I was finishing my first Master’s Degree in elementary Education (University of South Carolina, Columbia, SC), I was scrambling for hours that could satisfy the last course requirements. I wound up taking an elementary education math methods course of all things, and driving all the way from the lower part of Orangeburg, SC some 60 miles southwest to Aiken, SC so I could wrap it up in a three week Maymester course and get the degree (and the much coveted step up in pay due to a higher degree.) My goal at the time was to just FINISH. This was pre distance-ed days, and even pre distance-ed via video tape. I know, that is hard to fathom. Every class had to be physically attended.

Book Trailers and Common Core Standards --------- Students use technology & digital media strategically and capably.-- Common Core Standards. I was dismayed to discover that the number of multicultural books published hasn’t increased during the last 18 years despite census data that shows 37% of the US population consists of people of color. This graphic is from Lee and Low publishers. I have posted a large number of book lists for kids focusing on multicultural books (some my own creations but others that I’ve happily discovered) but I know that my search capability in my blog is not that great. 50 Must-See Teacher Blogs Chosen By You This is part of a series of ‘Best of 2011‘ posts where we share some of the best education-related materials of the past year. Be sure to check back on a regular basis as we’ve got some pretty exciting stuff coming soon! During a recent chat with fellow Edudemic writer Terry Heick, we discussed the purpose of blogs.

URL Shortener w/ Link Management Delivr FREE Free No credit card. 100% ad free. The Michael L. Printz Award for Excellence in Young Adult Literature The Michael L. Printz Award annually honors the best book written for teens, based entirely on its literary merit, each year. In addition, the Printz Committee names up to four honor books, which also represent the best writing in young adult literature. Logic and inference through song Spurred by my recent foray into ideas for increasing critical thinking, here’s an idea that I think combines a lot of different ideas, including critical thinking and logical inference, into a skill-building activity that engages a virtually universal student interest: music. The text I will use for the activity I have in mind is Jonathan Coulton’s fabulously bittersweet song Blue Sunny Day. I suspect that this activity could be repeated with other songs, but I chose this song for several reasons. The first is that the song itself is musically upbeat – peppy and in a major setting* – and that will help engage students from the get-go.

QR Code Generator, 2d Barcode Generator, QR Code A QR code generator is a software or online application that allows you to create QR codes. QR codes are probably the most popular and flexible two-dimensional barcode that is used by most businesses and individuals for anything from their marketing campaigns, education and even in ordinary lives and lets not forget just for fun! They’re widely used by any web design agency As QR codes gain popularity, more and more Web sites are offering free QR code generator services. With all the choices, and because they are all similarly free, most people just use the first QR code generator they find. But how do you distinguish one service from the other?

Repetition Doesn’t Work: Better Ways to Train Your Memory How the massive influx of tourists impacted prostitution, which is technically legal, in the South American country. In 1920, to prepare for King Albert of Belgium’s visit to Rio de Janeiro, local officials engaged in an extralegal campaign to improve the city’s “moral hygiene.” Police rounded up all the lower-class prostitutes, cuffed them, and relocated them to the “Mangue”—or downtown marsh district, thereby forming Rio’s very first red light district. Further cleansing occurred in 1967, when police erected walls around the prostitution zone to shield it from the delicate gaze of Queen Elizabeth II in advance of her state visit the following year. The police crackdown on crime also extended to prostitution in order to, as the district attorney stated, “contribute to changing [Rio’s] soiled image.”

Blooming Orange: Bloom's Taxonomy Helpful Verbs Poster Here’s another poster to help get you thinking about how you can apply Bloom’s higher-order thinking skills with your children. This poster shows the segments of an orange with each segment relating to a thinking skill and some helpful verbs to serve as prompts. While there are many more verbs that we could have added, we felt that including just seven in each segment would make them easier to remember (For more information, see Miller’s paper “The Magical Number Seven, Plus or Minus Two: Some Limits on Our Capacity for Processing Information.” We thought it would be interesting to depict the verbs in a circular form as opposed to a hierarchical list, given that these skills don’t often occur in isolation and are interconnected.

Coretta Scott King Book Award Recipients Author Award Winner Kadir Nelson, author and illustrator of “Heart and Soul: The Story of America and African Americans” (Balzer + Bray, an imprint of HarperCollins Publishers). “Heart and Soul: The Story of America and African Americans” is an extensive volume focusing on American history as it intertwines with the lives of African Americans. The story is told from the viewpoint of an elderly woman who shares her life story while highlighting pivotal historical events including abolition, the Great Migration, World War II, and the Civil Rights movement. Avoiding Plagiarism: Quoting and Paraphrasing General advice When reading a passage, try first to understand it as a whole, rather than pausing to write down specific ideas or phrases. Be selective. Unless your assignment is to do a formal or "literal" paraphrase, you usually don?

In the brain, timing is everything Suppose you heard the sound of skidding tires, followed by a car crash. The next time you heard such a skid, you might cringe in fear, expecting a crash to follow — suggesting that somehow, your brain had linked those two memories so that a fairly innocuous sound provokes dread. MIT neuroscientists have now discovered how two neural circuits in the brain work together to control the formation of such time-linked memories. This is a critical ability that helps the brain to determine when it needs to take action to defend against a potential threat, says Susumu Tonegawa, the Picower Professor of Biology and Neuroscience and senior author of a paper describing the findings in the Jan. 23 issue of Science.

Paraphrase and Summary - University College Printable PDF VersionFair-Use Policy When should I paraphrase, and when should I summarize? To paraphrase means to restate someone else’s ideas in your own language at roughly the same level of detail.