Steps of the Scientific Method 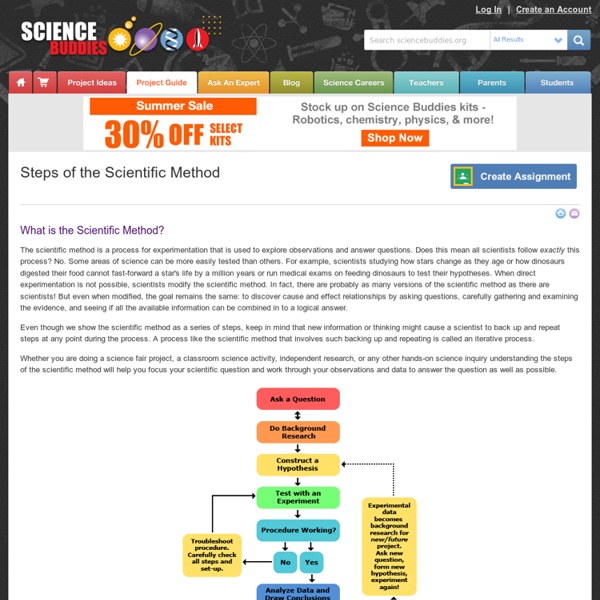 Please ensure you have JavaScript enabled in your browser. If you leave JavaScript disabled, you will only access a portion of the content we are providing. <a href="/science-fair-projects/javascript_help.php">Here's how.</a> What is the Scientific Method? The scientific method is a process for experimentation that is used to explore observations and answer questions. Even though we show the scientific method as a series of steps, keep in mind that new information or thinking might cause a scientist to back up and repeat steps at any point during the process. Whether you are doing a science fair project, a classroom science activity, independent research, or any other hands-on science inquiry understanding the steps of the scientific method will help you focus your scientific question and work through your observations and data to answer the question as well as possible. Educator Tools for Teaching the Scientific Method Related:  0018 Understand concepts related to scientific knowledge and inq • Curricular Role of the School Librarian

What is the Correlation of Science with other Subjects? Correlation of Science with other Subjects As known that for over all development of the students, various subjects are being included in the curriculum. These subjects are not selected on ad-hoc basis, but this decision is taken after proper consideration and analysation. Generally those subjects are included in the curriculum which is found to be complementary to each other, as the main objective of all of them is to achieve set objective of education that is to bring about over all development of the students. Science is quite a complex and vast kind of subject, because of which the task of correlating it with other subjects of curriculum seems to be quite an easy task. Deliberate effort should be done by the science teacher to bring about co-relation in between the science and other subjects of the curriculum, which are being imparted to the students. Science and Language: To co-relate science with language subjects, students can be asked to write essays on some scientific topic.

Introduction to the Scientific Method Introduction to the Scientific Method The scientific method is the process by which scientists, collectively and over time, endeavor to construct an accurate (that is, reliable, consistent and non-arbitrary) representation of the world. Recognizing that personal and cultural beliefs influence both our perceptions and our interpretations of natural phenomena, we aim through the use of standard procedures and criteria to minimize those influences when developing a theory. As a famous scientist once said, "Smart people (like smart lawyers) can come up with very good explanations for mistaken points of view." I. 1. 2. 3. 4. If the experiments bear out the hypothesis it may come to be regarded as a theory or law of nature (more on the concepts of hypothesis, model, theory and law below). II. As just stated, experimental tests may lead either to the confirmation of the hypothesis, or to the ruling out of the hypothesis. Error in experiments have several sources. III. IV. V. VI. VII. 1. 2. 3.

The Great Question Press Why should teachers nurture potent questioning skills and behaviors? As a practical matter, students need to be able to read between the lines, infer meaning, draw conclusions from disparate clues and avoid the traps of presumptive intelligence, bias and predisposition. They need these thinking skills to score well on increasingly tough school tests, but more importantly, they need these skills to score well on the increasingly baffling tests of life . . . how to vote? how to work? how to love? Drill and practice combined with highly scripted lessons stressing patterns and prescriptions amount to mental robbery - setting low standards for disadvantaged students so they end up incapable of thought or success on demanding tests. This approach contributes to high dropout and attrition rates - early school departures and millions of children left behind.

Science » Explore the 5 E’s of Science Engage These lessons mentally engage the students with an event or question. Engagement activities help students to make connections with what they know and can do. What the Teacher Does Creates interestGenerates curiosityRaises questionsElicits responses that uncover what the students know or think about the concept/topic What the Student Does Asks questions, such as Why did this happen? Explore Students work with one another to explore ideas through hands-on activities. Encourages the students to work together without direct instruction from the teacherObserves and listens to the students as they interactAsks probing questions to redirect the students’ investigation when necessaryProvides time for students to puzzle through problemsActs as a consultant for students Thinks freely, but within the limits of the activityTests predictions and hypothesisForms new predictions and hypothesesTries alternatives and discusses them with othersRecords observations and ideasSuspends judgment Explain

Global Connections . Science and Technology Cellular phones, for example, are increasingly popular in the Middle East, providing telephone access in more remote communities as well as in crowded urban areas. Wireless service bypasses the difficult and expensive requirements for laying out and maintaining telephone cables. Satellite television news stations like Al-Jazeera provide new and varied sources of information to people in the Middle East who once had access only to government-controlled media. Internet cafes have sprung up in major cities and in regional centers throughout the Middle East, providing access to news and information for people who cannot afford to buy a computer themselves. Oil-poor countries do not have the economic resources to take advantage of these new technologies. Back to top Related sites Gunning for Saddam: Saddam's Weapons of Mass Destruction: shows/gunning/etc/arsenal.htmlA summary of Iraq's development of biological and chemical weapons Related topics

History of science "New science" redirects here. For the treatise about history, see The New Science. The history of science is the study of the development of science and scientific knowledge, including both the natural sciences and social sciences. (The history of the arts and humanities is termed as the history of scholarship.) Science is a body of empirical, theoretical, and practical knowledge about the natural world, produced by scientists who emphasize the observation, explanation, and prediction of real world phenomena. Historiography of science, in contrast, often draws on the historical methods of both intellectual history and social history. Early cultures[edit] In prehistoric times, advice and knowledge was passed from generation to generation in an oral tradition. The development of writing enabled knowledge to be stored and communicated across generations with much greater fidelity. Ancient Near East[edit] Greco-Roman world[edit] and again: India[edit] China[edit] Lui Hui's Survey of sea island