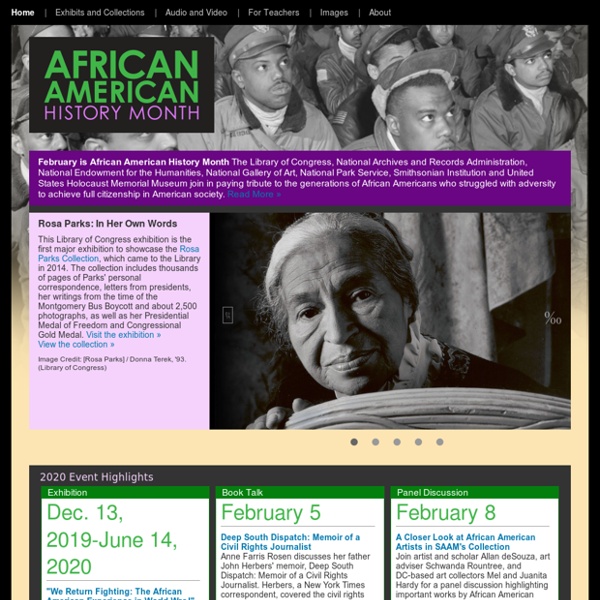 African American Women | David M. Rubenstein Rare Book & Manuscript Library Elizabeth Harris Johnson Memoir, 1867-1923 Elizabeth Johnson Harris was born in Augusta, Georgia, in 1867 to parents who had been slaves. Her 85 page handwritten memoir provides glimpses of her early childhood, of race relations, of her own ambivalence about her place as an African-American in society and of the importance of religion and education in her life. This online collection includes full text of her memoirs as well as several of her poems and vignettes that were published in various newspapers during her lifetime. Hannah Valentine and Lethe Jackson: Slave Letters from the Campbell Family Papers Hannah Valentine and Lethe Jackson were house slaves at Montcalm, the family home of David and Mary Campbell, located in Abingdon, Virginia. Violet Lester Letter Slave letters are very rare documents.

Center for the Study of Religion and American Culture :: Teaching Resources Presenting religious content in the classroom can be a tricky business. In public elementary and secondary institutions, teachers face many challenges in discussing religion in the context of American history, government, literature, and other areas. Parents with strong beliefs may object to the presentation of religious points of view they don’t share. Parents who believe in secular education may object to religion being discussed at all. College students can also have difficulty objectively interpreting religious content. The Center is pleased to share instructional materials developed by its researchers and participating scholars for use in the classroom.

Al-Mizan ‘Al-Mizan’ is the Arabic word for balance - both the familiar measuring instrument and the metaphorical pursuit of justice and harmony in all human endeavours. For hundreds of years after the advent of Islam, Arabic was the language in which mathematics and science were most actively studied. The intellectual achievements of scholars in the Islamic world were matched by the emergence of a highly distinctive visual and artistic culture. This exhibition explores the connections between the sciences and arts in Muslim societies. The exhibition has been staged by the Museum of the History of Science in collaboration with the Oxford Centre for Islamic Studies.

Black History Month February is Black History Month, a time when communities and schools give special attention to learning about the contributions and history of African Americans. We've gathered some great resources you can share with students in February — and throughout the year. Writers, illustrators, and storytellers Video interviews with children's book authors and illustrators Watch Reading Rockets' interviews with celebrated African American children's book authors and illustrators, and children's literature historian, Leonard Marcus, who talks about the history of multicultural children's books in the U.S. from the 1960s onward. Watch the full interviews with these award-winning authors and illustrators: Celebrating Black History Month with Poetry On her Poetry for Children website, Sylvia Vardell showcases wonderful poetry created by African American poets who write for young people, including Marilyn Nelson, Nikki Giovanni, Carole Boston Weatherford, Nikki Grimes, Ashley Bryan, Charles R.

Amazing World Atlas by Lonely Planet Kids - Educational Geography Game on the App Store Automobile In American Life and Society Black History Month | News For Kids, By Kids John Lewis (left) as Freedom Rider, May 20, 1961. (Photo: Bettmann/CORBIS) The achievements and contributions of African-Americans to U.S. history have been celebrated in this country since 1926. February became the month for recognition because it marks the birthdays of two men who positively influenced African Americans in the U.S.: Frederick Douglass and Abraham Lincoln. This year also marks the 50th anniversary of the Freedom Rides, which occurred in May 1961. You will find many similar stories from Kid Reporters recognizing the achievements and accomplishments of African American leaders in this country. For the latest on national and international events, movies, television, music, sports, and more, check out the Scholastic Kids Press Corps homepage. Articles Legacy of a Dream by Fred Hechinger Scholastic Kids Press Corps | nullnull,null The Church of the Intercession in New York was transformed into a movie theater recently for a very special event. Activities March On!

World Digital Library Home MIT Visualizing Cultures Connecting Kids with Black History . Embracing Black History . PBS Parents Home » Teaching children about the historical accomplishments and struggles of African Americans benefits everyone. By connecting children with history, they'll gain a better understanding of themselves no matter what color they are. In the spirit of honoring African American pioneers and landmark events in black history, engage your children in activities that capture their senses. Read some books.

Celebrates African-American History through a wealth of resources. by nda_librarian Apr 30