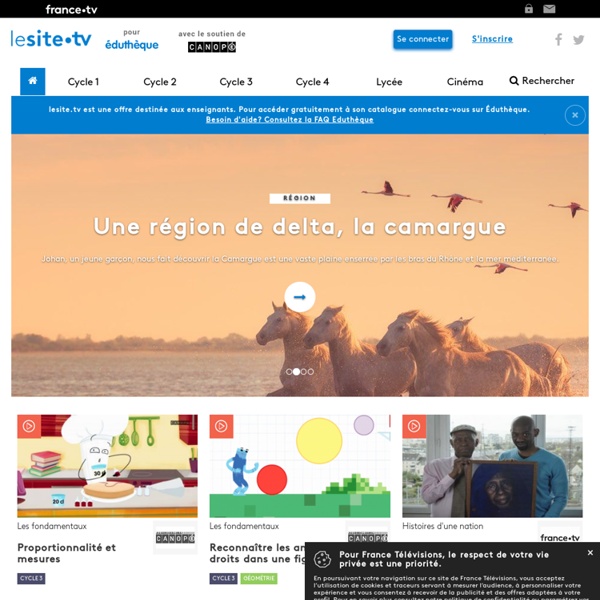 Microsoft Launches a New Classroom Platform The future of the classroom is taking shape through digital workspaces shared by teachers and students, and Microsoft is carving out its own place in an increasingly competitive market. Today, Microsoft announced a new platform for education — Microsoft Classroom. Having stitched together tools from Office 365 and a series of learning management partnerships, Microsoft has high hopes that Classroom will become the central hub for the class experience. "Classroom is deeply integrated into the fabric of Office 365," says Tony Prophet, Microsoft’s corporate vice president of education marketing.

10 Tips for Surviving and Thriving in Your First Year Teaching - Edutopia Dear New Teachers, This blog post is for you. Perhaps you’ve heard that your first year will be “sooo hard.” I want to offer you another possibility. Your first year might just be awesome. You might not only survive it but you could even thrive. Teaching Foreign Languages K-12: A Library of Classroom Practices 1. Introduction to the Library This program provides an overview of the entire library, with suggestions for use in professional development settings. Go to this unit. 2.

List of Person of Interest episodes Series overview[edit] Episodes[edit] Season 1 (2011–12)[edit] Season 2 (2012–13)[edit] Season 3 (2013–14)[edit] Season 4[edit] Free Audio Books Sort by Titles Per Page 1 - 10 of 10068 Titles by Napoleon Hill Veille et Analyses de l'ifé Dossier de veille de l'IFÉ : Développer l'esprit critique par l'argumentation : de l'élève au citoyen n°108, février 2016 Auteur(s) : Marie Gaussel Télécharger la version intégrale du dossier (version PDF) Résumé : On assiste depuis quelques années à un intérêt grandissant pour les pratiques argumentatives dans l’école. Red-state politics in and out of the college classroom For two decades, I have taught U.S. women’s and gender history at Southern Illinois University at Carbondale, a blue town in a blue state, marooned in an ocean of red. Bordered by Appalachia, the Mississippi Delta and the Ozarks, Southern Illinois is surrounded by the country’s poorest rural regions. Some of my students arrive from white farming communities and are the first in their families to attend college. They grow up on church, military, patriotism and traditional family, and they come from a world different from mine. I grew up in 1970s San Francisco, and my parents were leftists. As I prepared to teach about abortion and gay rights for the first time in 2003, I approached the classroom with trepidation.

The 13 Best Youtube Channels to Learn French According to a study by PhD graduate Paul Sulzberger from Victoria University, listening to a language is one of the most efficient ways to learn it. To do that, you could listen to a podcast, watch French TV or watch French movies. Or you could go to Youtube and learn French with one of the Youtube channels I selected for you. Whether you’re a beginner, intermediate or advanced French learners, there is a Youtube channel for you here! The Best Youtube Channels for beginner French learners Learning French with videos can be extremely rewarding and fun, but you need to make sure you don’t end up watching videos that are 90% in English.

The New Rules of TV: Movies + TV Nearly everything about how we watch television has changed. For starters, we can do it anytime we want. (Thank you, Hulu, Netﬂix, and stuff we've never heard of!) And yes: The shows are a whole lot sexier, more terrifying, complex, and hilarious than the ones we grew up with. It is, as people like to say, a new golden age of television.