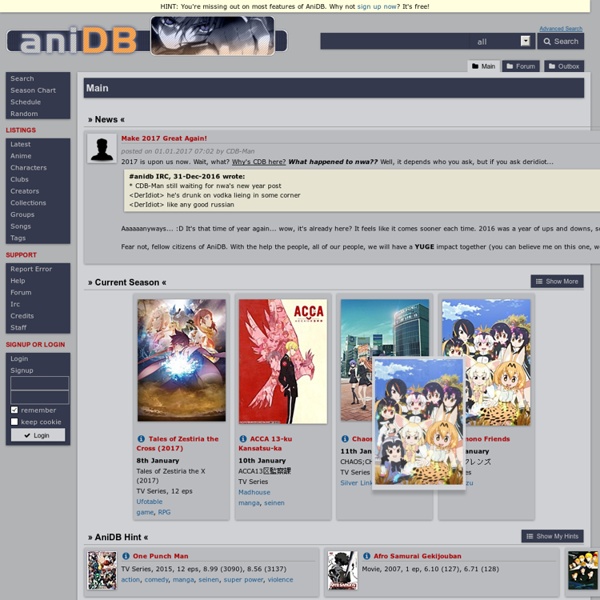 Origins of character names in Dragon Ball Races Saiyan (Saiya-jin) - In Japanese, saiya is formed by rearranging the syllables of the Japanese word yasai which means "vegetable". Tuffle (Tsufuru-jin) - In Japanese, tsufuru is formed by rearranging the syllables of the Japanese word furutsu which means "fruit". Namekian (Nameksei-jin) - In Japanese, namek is a shortening of the Japanese word namekuji which means "slug". Neregate Because I love wasting my time on side-projects instead of doing stuff that really matters, I present to you Neregate Statistics, a small service meant to show visitors some statistics about the website, its traffic, etc. There’s only one month for now, but I’ll update it monthly as time goes by. Some of the data may very well surprise you (it still surprises me sometimes too) given the high figures, but that’s because the “views” counter you see on the site has some very precise criterias, unlike the log analyzers which record everything. Should work flawlessly on any “browser”.

The Cart Driver Chart via Anichart.net Chart via Neregate. Chart made by me, back when I was crazy enough to do these things. Does The Dog Die? #TubeClash - The Movie There are "wookies" in the movie that look little like the ones in Star Wars, but are more like cute little fuzzballs. One of them is killed by a character by being cut in half, being mistaken for a monster. It however comes back to life as a zombie and appears as such for the rest of the movie and its sequels. So despite being killed, it is undead for most of its on-screen time and still has its consciousness. There are also other zombie wookies, but we don't see them die. Random Curiosity Sankaku Complex - Anime, manga and games, observed from Japan Great practical effects films I'll always applaud the old school effects, if only for the immense work in just getting one ship to light up. Take this shot. It looks pretty straight forwards, ship in front of background moving around. But due to the nature of film is where things get tricky. If you were to just light the ship then shoot it would appear flat with and washed out as every element has different exposure rates.

The Visual Novel Database Animekon - Anime news, trailers, gallery - A flat chest is fine, too! Top 50 movie special effects shots CRITERIA FOR THIS LIST:This is not a list of 'iconic' SFX shots, such as the opening shot in Star Wars or the final shot in Back To The Future, etc. There are many fantastic SFX shots in cinema history that are artistically 'awesome' without qualifying here. For the purposes of this list, a shot has to be either a) exceptionally convincing, b) ground-breaking or c) an exemplary execution of an oft-used technique. Anime Characters Database Chartfag's Den of Lesbian Enterprise The Art of Practical Effects As noted by my other entries, I am biased towards natural cinematography shot on motion picture film. If it’s shot through a lens onto celluloid, count me in! Recently, I have been thinking about a list of films with flawless execution of “special” effects. By “special,” I mean true to life, in camera, photographic effects.

50 Amazing Movie Facts! 2. Samuel L. Jackson politely requests that anyone who claims not to enjoy watching themselves in movies to please stop lying. 3.