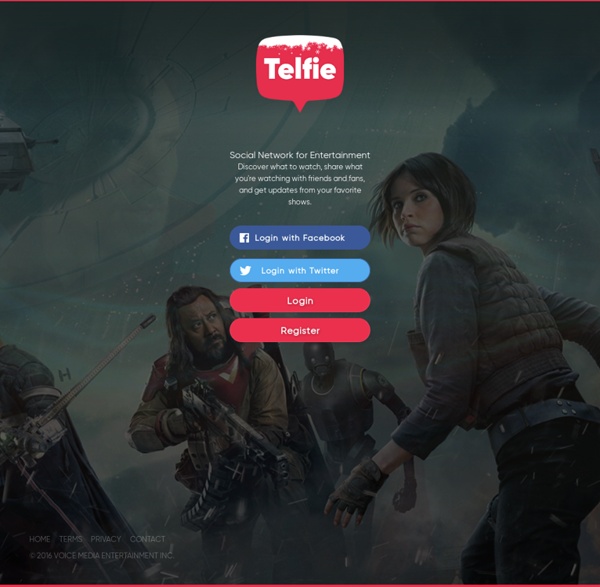 Social Network for Entertainment Discover what to watch, share what you're watching with friends and fans, and get updates from your favorite shows.

The 40 Sexiest Scarlett Johansson GIFs « 9 out of 10 doctors agree that you absolutely cannot have enough Scarlett Johansson in your diet. And since we’ve already brought you Scar-Jo’s hottest photos in celebration of her birthday, we decided today to show you her sexiest GIFs from various movies, TV appearances, and life. Obviously we won’t be including this one. Record and share video live from your mobile phone At Skype, we know and love that technology continues to evolve. Today, people carry smartphones around in their pockets instead of being tethered to a desk, allowing people to stay in touch on the go. Skype has likewise evolved to help people stay connected from anywhere on any device, and we’ve continued to see growth on Skype for mobile devices. In fact, we’re honored that Skype is consistently rated as one of the top mobile apps on iTunes, the Google Play Store and the Windows Phone Store.

50+ iPad Resources You Might Have Missed Apple's iPad is the little device that could. Any scepticism about Apple's tablet technology was largely erased as the iPad took touchscreen technology to a larger, more robust high. We've tracked the iPad through its first months in public hands with a slew of features and resources. Internet Society (ISOC) All About The Internet: History of the Internet Barry M. Leiner, Vinton G. Cerf, David D. Clark, Robert E. Kahn, Leonard Kleinrock, Daniel C. Lynch, Jon Postel, Larry G. 26 Places to Find Free Multimedia for Your Blog Nothing makes a blog post more eye-catching than a great header image, but not all publishers have artistic talent. And even accomplished digital creatives often crave some found material to start from or work with in a project. Luckily for all of the above, sources abound for finding a compelling photo to grab your readers' eyes and draw them in, or to locate fresh multimedia to remix. Creative Commons search

Showbiz Imagery and Chicanery Harry The Hipster plays downtown Los Angeles click to watch this very rare 1939 Universal comedy Ted Flicker’s creation premieres The Connections Between Social Networks and Cloud Computing Everyone is talking about “the cloud.” But what does it mean? Business applications are moving to the cloud. Five things you don’t need in your next smartphone Gadget bloggers tend to share a few key traits, and one of those is an inability to resist high-end hardware. Super-fast processors, hi-res screens and next generation features get our blood rising. But we sometimes get blinded by our desire for specs, and all too often we ignore the high price that these features come with. Let's take a step back and examine the need, or lack thereof, for some of the capabilities of the latest round of smartphones.

used to like but it got a badges overdose...now it's dead. by noosquest May 10

Just out curiosity, what do you guys specifically like in GetGlue? by Patrice Jun 29

Nice social site. The suggestions system is a bit rubbish. by markbillson Jun 29

Nice interest network which focus on books, musci and event for now by Patrice Mar 1