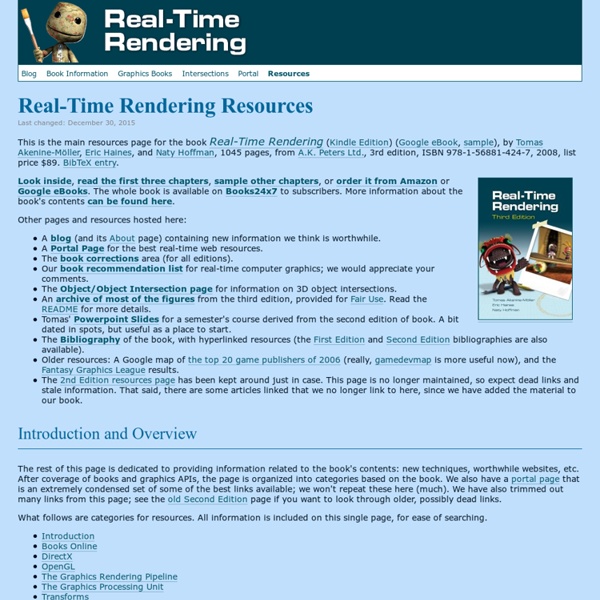 This is the main resources page for the book Real-Time Rendering (Google eBook), by Tomas Akenine-Möller, Eric Haines, and Naty Hoffman, 1045 pages, from A.K. Peters Ltd., 3rd edition, ISBN 978-1-56881-424-7, 2008, list price $89. BibTeX entry. Look inside, read the first three chapters, sample other chapters, or order it from Amazon or Google eBooks. The whole book is available on Books24x7 to subscribers. More information about the book's contents can be found here.

Computer Graphics Conference and Special Issue 2010 Now that the first volume of Game Development Tools has gone to the printers and will be available shortly, we invite you to submit a proposal for an innovative article to be included in a forthcoming book, Game Development Tools 2, which will be edited by Marwan Y. Ansari and published by CRC Press/A. K. Peters. We expect to publish the volume in time for Siggrah 2012. We are open to any tools articles that you feel would make a valuable contribution to this book. GRAIL Publications Publications by members of the GRAIL community, organized chronologically. The title of each publication links to more information about the publication - abstract, links to the publication itself, and auxiliary material. Illumination-Aware Age ProgressionIra Kemelmacher-Shlizerman and Supasorn Suwajanakorn and Steve M. Seitz CVPR 2014, June 2014. Offline Policy Evaluation Across Representations with Applications to Educational GamesTravis Mandel and Yun-En Liu and Sergey Levine and Emma Brunskill and Zoran Popović International Conference on Autonomous Agents and Multiagent Systems (AAMAS 2014), May 2014.

Animation Notes Contents Cut Outs - Straight Ahead Animation The projects below are not required submissions but the notes may be of interest to you. Please refer to Chris Barker for your animation assignments Metamorphosis - Hand Drawn AnimationKey Pose drawingsWalk Cycle - Character AnimationLip Sync - Making a Character TalkClaymation "The Audition"Pixillation Experimental Animation The use of Silhouettes in Concept Design Silhouette thumbnails are among the most helpful and productive methods of design when it's necessary to produce a large quantity of variations of concepts within a short period of time. It's not a method used by all concept artist and it's certainly not a necessity to design a creature or a character purely based off of a silhouette shape. That doesn't go to say that all designers don't subconsciously focus on shapes and designs that make a strong impact on the viewer. We often refer to a silhouette as a black outlined shape, much like a shadow. This doesn't always need to be the case, as a simple line sketch or simple shades of value can still provide the same effect and are just as efficient. Whether consciously or subconsciously we are always designing through the use of interesting dominate shapes that work well together.

A new angle on parallel languages: the contribution of visual arts to a vocabulary of graphical projection in video games « G It is fair to argue that in the short history of game studies, the concept of graphical projection has not been used in all its dimensions. In a way, we might even say that the idea has been systematically overlooked. Therefore, in order to fully express the potential of graphical projection in game studies, we have to properly define the vocabulary used to describe its various forms. Indeed, while the press and gamers have only applied catch-all terms like top-down view and isometric graphics, researchers need a more robust and complex categorization of each type of projection. My opinion is that a proper use of the language of visual arts will provide a more robust analytical tool for game studies.

(1) Anthropomorphic character design in animation and sequential art: The symbolic use of the animal to portray personality 3 |Page character is. On this scale I shall place inanimate objects on one end andhuman beings as the opposite extreme.Examples of inanimate objects include cars, clocks, candlesticks, mechanicalwindup teeth and many other examples that can be found in anythingbetween Saturday morning cartoons and Walt Disney blockbusters. Many ofthese objects may or may not have features that resemble the human face,but the items upon which they are based certainly are not sentient at anylevel. Examples such as Pixar‟s

CGI Research Paper - Creating an Emotional Response - Jonathan Joly Introduction The subject I have chosen to investigate is an extremely broad one, which requires months of extensive research. Therefore I have decided to investigate the following sub topics: The Uncanny Valley, Character Design and Character Animation.

Cebit 2012: 3D animations for everyone March 06, 2012 3D movies like "Toy Story" or "Transformers" are based on everyday objects that are able to move like humans. Such 3D characters are created by skilled experts in time-consuming manual work. Computer scientists at the Max Planck Institute for Informatics have now developed two computer programs that can accomplish the same process in mere seconds and can easily be handled even by inexperienced users. The researchers present their unique software for the first time at F34 in Hall 26 at the Cebit from March 6 -10, 2012. Zoom Image

(6) Ernst Kohlrausch: a forgotten pioneer of chronophotography associations, and he enthusiastically embraced the new games. Kohlrausch’s book onteam games, setting out rules and providing guidance on organizing competitions, Turnspiele nebst Anleitung zu Wettkämpfen und Turnfahrten...eine Sammlung vonSpielen 15+ Satirical Evolution Cartoons To Celebrate Darwin Day Today, on the birthday of Charles Darwin, we celebrate Darwin Day, to promote science and highlight his contributions to the field. Darwin is best known for his groundbreaking book, “On The Origin Of Species,” published in 1859, that convincingly argued the theory of species evolution. Evolution, however, can take many forms, and we at ​Bored Panda​ compiled this list to show it. Did we get better or did we get worse? Have we advanced technology, or become enslaved by it? You decide!

From a 2-D view comes a 3-D face model using deep neural networks (Tech Xplore)—Whether it's for gaming, entertainment, or education purposes, you can expect to see researchers aiming for techniques to bring you high visual impact in the virtual space, now that we are becoming increasingly linked to living and learning online. Recent news is that a detailed 3-D face can be created just from a single picture. You input a 2-D image and the output is a good, textured 3-D face model.

More than animation: Software supports animated storytelling Disney Research has developed new tools to help people use animation to tell stories by eliminating distracting details that hamper creativity, suggesting ways to fill holes in plots and assisting in the creation of virtual worlds where stories can play out. "We are empowering anyone to create their own animated stories," said Mubbasir Kapadia, a former Associate Research Scientist at Disney Research and now Assistant Professor at Rutgers University. This could include anyone from a professional screenwriter who is creating pre-production storyboards to casual users who simply want to try their hand at animated storytelling. The researchers have developed two such tools - CANVAS, a computer-assisted tool for creating narratives, and Story World Builder, a graphical platform where people can create "story worlds" populated with characters and props.