Businessinsider. How-steve-jobs-trained-his-own-brain. This isn’t a Bucket List; it’s a F**k-it List. Life can end in an unpredictable instant. 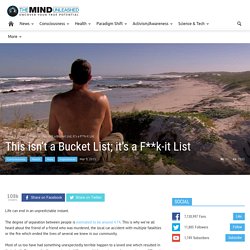 The degree of separation between people is estimated to be around 4.74. This is why we’ve all heard about the friend of a friend who was murdered, the local car accident with multiple fatalities or the fire which ended the lives of several we knew in our community. Most of us too have had something unexpectedly terrible happen to a loved one which resulted in their death. For example, there are terminal illnesses which spontaneously occur at many different ages and not just once a person has lived a full life, as well as accidents, rare diseases etc. It also feels all too common that we hear about a father who died whilst saving his son from drowning or an adult member of the public who perished whilst attempting to rescue another person from some life or death situation. These are both tragic and triumphant stories of human affairs.

This article isn’t about fear or tragedy, but self-empowerment. 25 Life Changing Lessons To Learn From Rumi. By Luminita Saviuc “Study me as much as you like, you will not know me, for I differ in a hundred ways from what you see me to be. 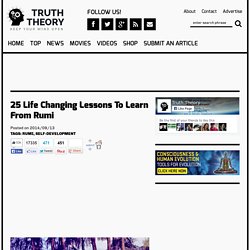 Put yourself behind my eyes and see me as I see myself, for I have chosen to dwell in a place you cannot see.” ~ Rumi Jalāl ad-Dīn Muhammad Balkhī, also known as Rumi, was a 13th-century Persian poet, jurist, theologian, and Sufi mystic who, in my personal opinion, wrote some of the most beautiful and most profound words that were ever written. You won’t believe it how much wisdom and how so much power there is in his words.

It’s incredible. Today I would like to share with you 25 life changing lessons to learn from Rumi, lessons that have the power inspire and empower you to live a more authentic, beautiful, loving and meaningful life. Enjoy 1. “You were born with potential. “You sit here for days saying, This is strange business. “Why should I stay at the bottom of a well when a strong rope is in my hand?” “Become the sky. “Do you know what you are? 2. 3. How to find your passion. 7.6k shares Share on Facebook Share on Twitter Too many of us believe in a magical being called ‘passion’. 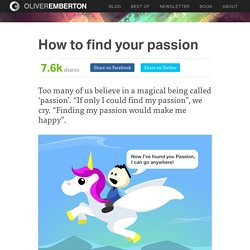 “If only I could find my passion”, we cry. “Finding my passion would make me happy”. Well, passion is real, and very powerful. But almost everything people believe about finding it is wrong. Rule 1: Passion comes from success All of our emotions exist for good reason. Imagine you start a dance class. The enemy of passion is frustration. Most people get this backwards. Rule 2: Childhood is where passion goes to die. Christopher Nolan: the man who rebooted the blockbuster. In early spring of 2013, Christopher Nolan and his crew were scouting for locations in Iceland – looking for glaciers that could stand in for the icy wastes of a distant planet in Nolan’s new film, Interstellar. 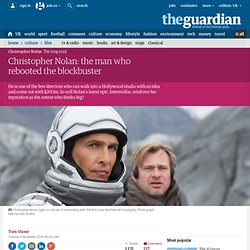 They were on foot, the terrain proving inaccessible by car through freezing rain. The glacier they were heading towards, the sixth or seventh of the day, did not seem to be coming any closer. Finally, after hiking four or five kilometres, they were forced to stop; in front of them stretched an ice-cold lake. There seemed to be no way around it. “We were all gathered around staring at this lake,” the cinematographer Hoyte van Hoytema recalled, “and Chris took his shoes and socks off and just strode out into the water, going straight towards that gigantic chunk of ice. Nolan likes to shoot fast. “It’s how he solves problems,” says Michael Caine, whose role as a scientist in Interstellar makes this his sixth consecutive movie with the director. “What do I say, ‘Dinner is served?’” New sense of excitement in India, Google’s Sundar Pichai says.