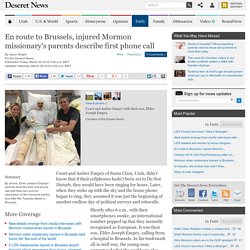 Courtesy of the Empey family Court and Amber Empey of Santa Clara, Utah, didn’t know that if their cellphones hadn't been set to Do Not Disturb, they would have been ringing for hours. Later, when they woke up with the sky and the home phone began to ring, they assumed it was just the beginning of another endless day of political surveys and robocalls. Shortly after 6 a.m., with their smartphones awake, an international number popped up that they instantly recognized as European.

“He was so positive,” Empey’s mother, Amber, said during a phone call from Salt Lake Airport’s International terminal. As widely reported, Elder Empey, Elder Mason Wells, Elder Richard Norby and Sister Fanny Rachel Clain, who are serving as missionaries for The Church of Jesus Christ of Latter-day Saints, were all injured during the blast that killed 31 and injured more than 300 others. 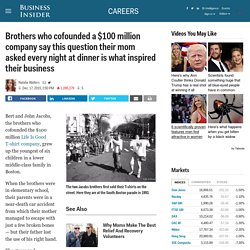 Here they are at the South Boston parade in 1993. Bert and John Jacobs, the brothers who cofounded the $100 million Life Is Good T-shirt company, grew up the youngest of six children in a lower middle-class family in Boston. When the brothers were in elementary school, their parents were in a near-death car accident from which their mother managed to escape with just a few broken bones — but their father lost the use of his right hand. The stress and frustration from his physical therapy caused him to develop a harsh temper, they explain in their new book "Life Is Good.

" "He did a lot of yelling when we were in grade school," John told Business Insider. "There were often difficult things happening around the house," the brothers write. But their mom, Joan, still believed life was good. "As simple as mom's words were, they changed the energy in the room," the brothers write. Underprivileged Kids Are Offered Two Gifts: One They Want And One Their Parents Want. They Can...

“Just Call Me Ruth” At A Glance May 2010, Johannesburg, South Africa After being able to have only one child, Ruth Renlund became a personal injury trial lawyer. 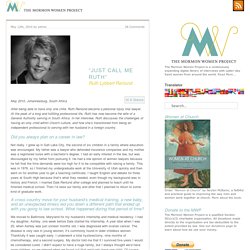 At the peak of a long and fulfilling professional life, Ruth has now become the wife of a General Authority serving in South Africa. In her interview, Ruth discusses the challenges of having an only child within Church culture, and how she’s transitioned from being an independent professional to serving with her husband in a foreign country.Did you always plan on a career in law? Not really. A cross-country move for your husband’s medical training, a new baby, and an unexpected illness led you down a different path that ended up with you going to law school. We moved to Baltimore, Maryland for my husband’s internship and medical residency. Happy Animals Club. My Friend Teresa Studios. Focusing on the best years of your life: high school, college, career, and (of course) family. 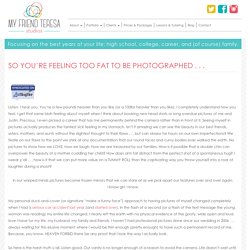 Listen. I hear you. You’re a few pounds heavier than you like (or a 100lbs heavier than you like). I completely understand how you feel. I get that same blah feeling about myself when I think about booking new head shots or long overdue pictures of me and Justin. In our warped minds pictures become frozen mirrors that we can stare at as we pick apart our features over and over again. My personal duck-and-cover (or signature “make a funny face”) approach to having pictures of myself changed completely when I had a serious car accident last year (and started over). So here is the harsh truth y’all. Do you know what my mom sees when she looks at this picture? Shocker: No one is looking at how fat I look. Can we agree to put the value of family over the value of fat? Your children want pictures with their mom.

Your husband wants pictures with his beautiful wife. This Is A MUST Read: Take A Gander At This Amazing, But Little Known, 9-11 Story. This Moving Company Helps Women Leave Abusive Homes At No Cost. I was reading through all the negativity and stupidity this morning while drinking my coffee and something said, ‘how about some good news?’

What the Wright Brothers Teach Us About Passion. In the age of endless self-documentation and instant gratification, it’s easy to fake passion. 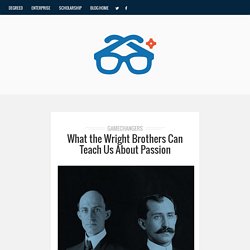 If the thing you loved to do was widely believed to be impossible—or people called you a crackpot for trying— would you still do it? In the late 1800’s, most people believed aeronautical engineers were crackpots. It was widely believed that man-powered flight was impossible. Airplane crashes made for great stories, and journalists were all over that. Who doesn’t love to hear about stupid people getting injured by jumping off roofs thinking they can fly?