This is Money: Be your own financial adviser - predictions, advice & tips 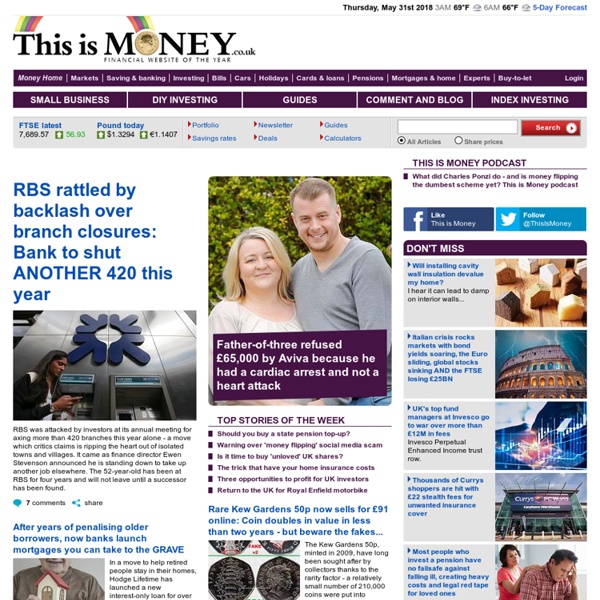 Vienna Declaration and Programme of Action WORLD CONFERENCE ON HUMAN RIGHTS Vienna, 14-25 June 1993 Note by the secretariat Attached is the text of the Vienna Declaration and Programme of Action, as adopted by the World Conference on Human Rights on 25 June 1993. The World Conference on Human Rights, A new runway at Heathrow will never be built. Accept it - Telegraph When Britain’s airports were privatised back in the 1980s, they were sold off as a single company. As it happens, this was against the better judgment of the presiding secretary of state, who favoured a more competitive landscape for airport capacity. But he lost the argument to the City, which refused to buy unless sold a monopoly. The upshot was that whenever the question of further expanding London airport capacity came up there was only ever one serious proposal – another runway at Heathrow.

Chicago Uni - Behavioural Economics Traditional economics holds that humans, as rational beings, make choices to maximize their welfare. Chicago’s Richard Thaler argues that policy makers—including those working on President Bush’s plan to partially privatize Social Security—would do well to remember that rationality has its bounds. The advertisements appeared in late August 2000 on Swedish television and in women’s magazines, traveling to billboards and bus stops and the pages of daily newspapers.

Investment share tips, guides and advice We recently quoted Thomas Gilovich writing about financial reportage in the context of the innate human desire to be entertained: ‘The possibility of inaccuracy obviously increases enormously when the worth of the message is measured by how well it entertains rather than how well it informs.’ The ‘ne plus ultra’ in investment commentary surely comprises all of the Reithian principles – inform, educate, entertain – and no two of these aspirations need be mutually exclusive. An extra dimension to this debate comes from tackling semi-solicited financial advice, its value – if any – and the form which it takes.

The Roman Empire: in the First Century. The Roman Empire. Emperors. Emperors The story of Rome’s Emperors in the first century AD has got it all – love, murder and revenge, fear and greed, envy and pride. Their history is a rollercoaster that lurches from peace and prosperity to terror and tyranny. Hereditary rule Why was the first century so turbulent? Loans for People on Benefits People who are suffering from physically or mentally ailments, they can’t earn enough money because of their faultiness at work. If need for the cash is urgent to manage daily expenses besides additional outlays, they can apply for payday loans for people on benefits without any hesitation. Security of collateral is not involved to protect the loan. Tenants and others who are living as paying guests, they can also avail the loan without any hindrance. Living on benefits is essential thing to take monetary support from these loans. You can acquire an amount ranging from £100 to £1000 for the flexible repayment period of 2-4 weeks.

Sports Enhancement Spring in America brings flowers, sweet warm breezes, and the thwack of a bat striking a baseball. But swings that would once have resulted in a fly ball to the warning track may now, with chemical assistance, deposit the ball in the bleachers. The Mitchell Report, an early Christmas present to baseball fans released in December 2007, confirmed that a number of Major League players have used performance-enhancing drugs. Disability Payday Loans Emergency occurs in one’s life without giving any prior notification and the intricate issue for you is your disability situation since you can’t borrow money from banks. In that case disability payday loans are the wonderful options which help you get the best monetary deal in hassle-free manner. The good news is that you do not need to pledge any kind of security to the lender for protecting the finance. Everyone can acquire an amount ranging from £100 to £1000 through these loans and this borrowed cash you have to repay within a period of 2-4 weeks.

In-Between Believing: The Implicit Racist Many Caucasians in academia sincerely profess that all races are of equal intelligence. Juliet, let's suppose, is one such person, a Jewish-American philosophy professor. She has, perhaps, studied the matter more than most: She has criticially examined the literature on racial differences in intelligence, and she finds the case for racial equality compelling. She is prepared to argue coherently, authentically, and vehemently for equality of intelligence, and she has argued the point repeatedly in the past.

Instant Loans for People on Benefits –Helps People Belong to the Debility It is true that the department of social security [DSS]has been launched by the UK government to offer monetary relief to several people who are unemployed, physically or mentally disturbance. Having benefits of DSS, you need extra cash assistance to take care of miscellaneous unplanned expenses. If availing a loan is difficult owing to disability, instant loans for people on benefits will be available there to endow you the sufficient money in a friendly. Need to be a perfect borrower! You have to satisfy some certain eligibility criteria include: you are a permanent citizen of United Kingdom. Instant Loans for People on Benefits –Accomplish Sudden Demand for Cash Straightforwardly Benefit of DSS [Department of Social Security] is insufficient. Disability is the cause that doesn’t allow you earnings satisfactory to carry out your fiscal requirements. Now, instant loans for people on benefits have been introduced to accomplish the financial needs of people who are disabled and staying on benefits of DSS. These credits assist you to get your desirable cash to get victory over your unforeseen expenses straightaway. Hence, these loans are the most helpful for you in fiscal urgencies. Instant loans for people on benefits have no aim to favour the fair credit holders.

Payday Loans For People on Benefits - Customized Deal For The Disability Shortage of money has now been a common problem in the life of human beings. People who are physically or mentally ailments; they have a big cash problem due to small earnings from the benefit of DSS. Expenses are knocking at your doors constantly, and disturbing you a lot, so you are in need of the fast cash assistance.

Instant Loans For People on Benefits -applying Online For Money up to £1000 Are you physically or mentally challenged and do not earn enough to manage your expenses? Benefit from DSS [Department of Social Security]is also not abundant to make your life hassle-free. Here are instant loans for people on benefits available for you and they offer an instant and stress-free financial assistance to get the victory over sudden expenses without any delay. The aim of these loans is to help disability people on benefits meeting their financial needs right on time. Do not need to waste your valuable time standing in ling queue! The internet has changed the method of application and modernized it quite simple and quick.

Instant Loans for People on Benefits–Enjoy Fast Monetary Backing How can you get advantages of loans despite your disability status? It is easy for everyone if he/she applies for instant loans for people on benefits. The disability people can apply for this product without any hesitation and get hold of money in ranging from £100 to £1000 with the easy reimbursement period of 2-4 weeks. To satisfy loan criteria is easy, and these criteria are below.