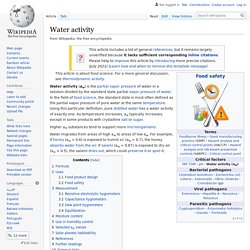 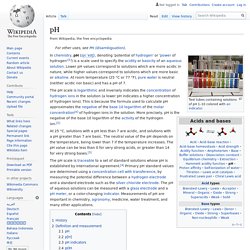 The pH scale is traceable to a set of standard solutions whose pH is established by international agreement.[2] Primary pH standard values are determined using a concentration cell with transference, by measuring the potential difference between a hydrogen electrode and a standard electrode such as the silver chloride electrode. The pH of aqueous solutions can be measured with a glass electrode and a pH meter, or indicator. History[edit] The concept of p[H] was first introduced by Danish chemist Søren Peder Lauritz Sørensen at the Carlsberg Laboratory in 1909[4] and revised to the modern pH in 1924 to accommodate definitions and measurements in terms of electrochemical cells. Definition and measurement[edit] PROCESS 02/03/10 AwDesigner aide à la formulation P. VULKOV. 3rd Central European congress on food - MAI 2006 - WATER ACTIVITY CONCEPT FOR SAFETY FOOD STORAGE. Appl. Environ. Microbiol. February 2007 vol. 73 no. 3 997-1001 Role of Branched-Chain Fatty Acids in pH Stress Tolerance in Listeria monocytogenes▿ 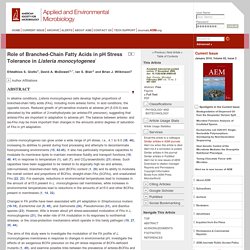 In acid conditions, the opposite occurs. FOOD PRODUCTION 19/12/06 Software ties product location to temperature and humidity data. Sybase says its RFID Anywhere 3.0 breaks new ground with the delivery of a context-aware location information system, allowing companies to track other data, such as temperature, at a particular location. 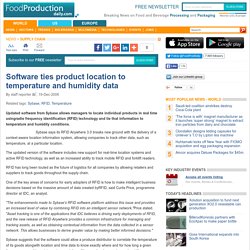 The updated version of the software includes new support for real-time location systems and active RFID technology, as well as an increased ability to track mobile RFID and forklift readers. RFID has long been touted as the future of logistics for all companies by allowing retailers and suppliers to track goods throughout the supply chain. One of the key areas of concerns for early adopters of RFID is how to make intelligent business decisions based on the massive amount of data created byRFID, said Curtis Price, programme director at IDC, an analyst. "The enhancements made to Sybase's RFID software platform address this issue and provides an increased level of value by combining RFID into an intelligent sensor network,"Price stated. 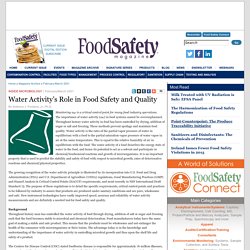 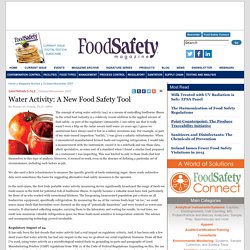 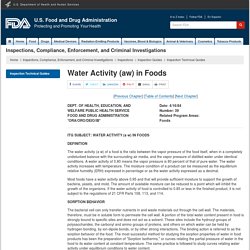 A water activity of 0.80 means the vapor pressure is 80 percent of that of pure water. The water activity increases with temperature. The moisture condition of a product can be measured as the equilibrium relative humidity (ERH) expressed in percentage or as the water activity expressed as a decimal. Most foods have a water activity above 0.95 and that will provide sufficient moisture to support the growth of bacteria, yeasts, and mold. The bacterial cell can only transfer nutrients in and waste materials out through the cell wall. Two basic methods can be used to obtain the constant temperature sorption curves. ENVT - Présentation : Ecologie microbienne des aliments.