Spark Core: Wi-Fi for Everything (Arduino Compatible) by Spark Devices 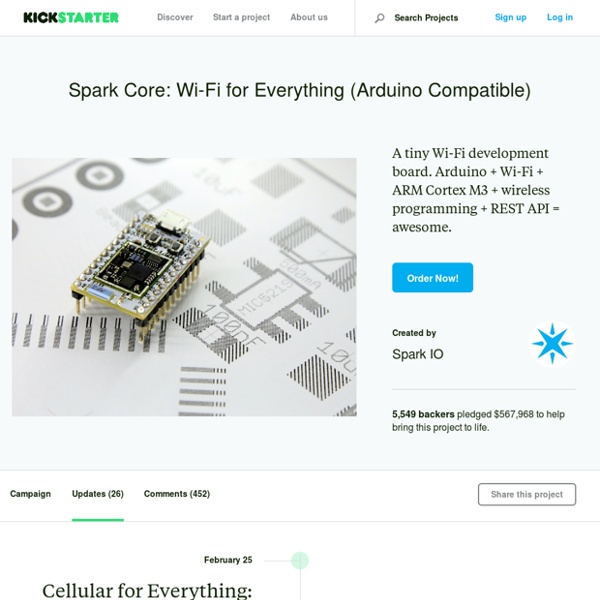 nilmtk/nilmtk Shrunk down an Arduino to the size of a finger-tip! by Open Source RF RFduino: A finger-tip sized, Arduino compatible, wireless enabled microcontroller, low cost enough to leave in all of your projects! The RFduino has Bluetooth 4.0 Low Energy built-in, which enables it to wirelessly talk to any smartphone that has Bluetooth 4.0. Currently we have several open source apps built for the iPhone which were used in our demos. The RFduino has a Nordic 32 bit ARM Cortex-M0 processor, so it has more power then the UNO, however it still runs the same, simple Arduino code the UNO runs, so there is no need to learn any new programming language or environment. The RFduino GPIO lines all support, Digital IO, Analog ADC, SPI, I2C, UART and PWM. The RFduino is similar to the Arduino UNO or DUE, except the RFduino is a fraction of the cost and size, in addition has wireless smartphone connectivity built-in! Up to now, adding wireless to an Arduino required an additional wireless shield which adds cost and size. It can be used with or without Bluetooth 4.0. - Armen

Exclusive: Nest has raised another $80M, now shipping 40K+ thermostats a month Smart thermostat startup Nest has closed on a round of $80 million, we’ve learned, and the funding was done at a post money valuation of $800 million. Google Ventures led the round, and Venrock participated as a new investor, according to our sources. Nest is currently listed on Venrock’s site. The company has raised this round to continue its growth; it’s now shipping 40,000 to 50,000 of its learning thermostats per month. If the company’s growth continues at this current rate, Nest could reach a shipment rate of 1 million thermostats per year by the summer, say our sources. Some of that growth is happening in Europe, in addition to its shipments in the U.S. Nest also plans to use the funds to offer a more comprehensive smart home service along with its product, which could include lighting and alarm systems, too, we’ve heard. We’ve reached out to Nest and are waiting to to hear back on these figures. Nest previously raised tens of millions of dollars before this round.

Kartograph.org Flutter: $20 Wireless Arduino with half mile (1km) range. by Flutter Wireless Flutter is a wireless electronics development platform based on Arduino. With over 3200ft (1km) of usable range, a powerful ARM processor, and integrated encryption, Flutter makes it easy for you to build projects that communicate across the house, across the neighborhood, and beyond. Whether you want to check the temperature of a beer-brewing setup, have your mailbox send you a text message when the mailman arrives, control a swarm of flying robots, or just turn on your lights with your phone, Flutter gives you the range, power, and flexibility to do it. We’re not just building circuit boards though. Our goal is simple: make it easier for engineers, makers, builders, and hackers to go farther with their projects than ever before. Creating Flutter networks is easy, even if it’s just two boards. Multiple options Building wireless projects shouldn’t have to be expensive. Flutter Basic ($20)Still under development, the Flutter basic is tiny and simple. Breakout Board RC Shield Bluetooth Shield

Smart Thinking “Poor Roo,” my friends say about my seven-year-old Corgi mix. “Don’t you think he minds having his every moment broadcast online?” The fact is Roo has become the unwitting subject of my electronic hacks. One of my recent experiments involved attaching an UP by Jawbone band to his harness to solve the mystery of just what he does all day. I must admit the first set of graphs was disappointing — it seemed like he did nothing but nap. Questioning the data, I reset the band to track a 27-lb, 14-inch tall “person”. Yep, I like to measure things Thankfully, I’m not the only one who likes to experiment with technology. As a designer, I’m really excited by this shift in how we relate to the everyday objects around us. What all this adds up to is a virtual database of physical objects — or “Internet of Things” — that can be accessed at any time. As inspired as I am by the possibilities, it’s also my job to keep things real. 1. 2. 3. 4. 5. 6.