This Is the Most Complex Integrated Quantum Circuit Ever Made 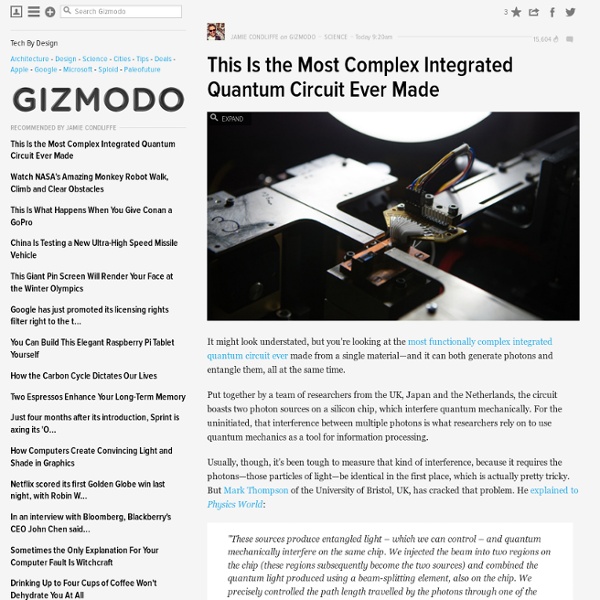 National Center for Biotechnology Information Lasers etch a 'perfect' solar energy absorber The University of Rochester research lab that recently used lasers to create unsinkable metallic structures has now demonstrated how the same technology could be used to create highly efficient solar power generators. In a paper in Light: Science & Applications, the lab of Chunlei Guo, professor of optics also affiliated with Physics and the Material Sciences Program, describes using powerful femto-second laser pulses to etch metal surfaces with nanoscale structures that selectively absorb light only at the solar wavelengths, but not elsewhere. A regular metal surface is shiny and highly reflective. Years ago, the Guo lab developed a black metal technology that turned shiny metals pitch black. "But to make a perfect solar absorber," Guo says, "We need more than a black metal and the result is this selective absorber." "This will be useful for any thermal solar energy absorber or harvesting device," particularly in places with abundant sunlight, he adds. More information: Sohail A.

Consensus in Science If it’s consensus, it isn’t science. If it’s science, it isn’t consensus.Michael Crichton I recently read the quote above by Michael Crichton — and it pretty much sums up my opinion of consensus in science. Turns out this quotation is from a speech, which is also cited in the one-page editorial titled “Consensus Science and the Peer Review” by Jorge R. As easy as it would be, and as grave as problems are seen — science must not become instrumentalized by politics, or, even worse, activism. Science is not a cudgel for mission-creep-happy activists. Linked Article: Barrio, J.

Consensus Science and the Peer Review The Secret History of Facial Recognition Why everybody laughs at Williamson, Lynn Margulis’ “best friend” | Earthling Nature by Piter Kehoma Boll Leia em português What would you think if someone came to you and said that your pet snail accidentally got pregnant and you’re the father? Or if you went to the doctor and he said to you “congratulations, you’re pregnant and the father is a sea urchin”. Of course you’d be proud, dontcha? Well, if you think that’s a ridiculous nonsense, you’re quite right. Born in 1922 (he’s 90!) All started, as already mentioned, in 1987, on his paper “Incongruous Larvae and the Origin of some Invertebrate Life-Histories” where he considers the huge differences between adults and larvae in many animals, at first mainly concerning echinoderms. Echinoderms, his first victims, are thought to have hybridized with hemichordates, so explaining why the larvae of both groups are so similar. Here is important to cite a work by Švácha (1992) studying the imaginal disks in larvae of holometabolous insects (those with larva, pupa and adult stages). Turbellarian larvae came from Rotiferans Related

Science, Pseudoscience, and Irrationalism Steven Dutch, Natural and Applied Sciences, University of Wisconsin - Green Bay First-time Visitors: Please visit Site Map and Disclaimer. Use "Back" to return here. What's Here and Not Here, And Why Things on this site generally fit one of the following criteria: They're within my area of technical expertise (earth science, physical sciences, astronomy) They pertain to the general nature of science They pertain to other areas where I have personal experience (military issues) They pertain to topics where blatantly fallacious logic is involved Although there is plenty of pseudoscience related to medical fads, diets, and the paranormal, I don't deal with them much because they are outside my formal training. There are certain things I don't put here because this is a site hosted by a public institution Partisan political positions. Essays that fall into the excluded categories are off-site at "Respect" There is nothing in crank movements worthy of respect.

Navigating the sounds of the cosmos - 5:4 It’s been with no little excitement that i’ve watched the Curiosity Rover landing on Mars this week. Astronomy has been a back-burner interest of mine since i was a boy and, not surprisingly, i’ve been especially fond of the sound recordings produced by NASA from the data received by Voyagers I and II as they’ve travelled through and beyond the solar system. So i was intrigued last year to see an independent release of something called Voyager: Sounds of the Cosmos, a large-scale compilation of these NASA recordings, made available in three versions of increasing length, titled ‘Grand Tour Edition’, ‘Standard Edition’ and ‘Legacy Edition’ respectively. However, as i’ve spent more time with it, i couldn’t shake the feeling i’d heard these before, so i did some elementary investigating. It turns out—and the compiler, one Philip Graham (aka RazorEye), admits this on the Wikipedia page—that the compilation is a bootleg of earlier NASA releases, some of which are still readily available.

RationalWiki DARPA selects BAE to develop machine learning capabilities for space BAE Systems has been awarded a Phase 2 contract to develop machine learning capabilities aimed to help the military gain better awareness of space scenarios for the U.S. Defense Advanced Research Projects Agency (DARPA). The goal of DARPA’s Hallmark Tools, Capabilities, and Evaluation Methodology (Hallmark-TCEM) programme is to not only develop and evaluate tools and capabilities that increase an operator’s understanding of space events, but also enhance the ability to select effective courses of action for any given situation, say the firm. “Space assets such as satellites are becoming increasingly important and relied upon by the Department of Defense for communications, surveillance, and security. “Our technology builds data models based on normal activity and then ingests large amounts of real-time, streaming data to compare against the normal model and determine if any abnormal activity is occurring or will occur,” said Dr.