How the Bitcoin protocol actually works 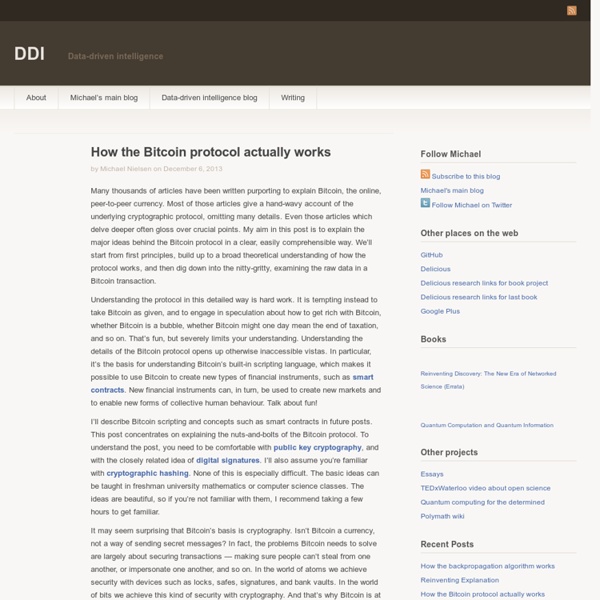 Many thousands of articles have been written purporting to explain Bitcoin, the online, peer-to-peer currency. Most of those articles give a hand-wavy account of the underlying cryptographic protocol, omitting many details. Even those articles which delve deeper often gloss over crucial points. My aim in this post is to explain the major ideas behind the Bitcoin protocol in a clear, easily comprehensible way. We’ll start from first principles, build up to a broad theoretical understanding of how the protocol works, and then dig down into the nitty-gritty, examining the raw data in a Bitcoin transaction. Understanding the protocol in this detailed way is hard work. I’ll describe Bitcoin scripting and concepts such as smart contracts in future posts. It may seem surprising that Bitcoin’s basis is cryptography. My strategy in the post is to build Bitcoin up in stages. This strategy is slower than if I explained the entire Bitcoin protocol in one shot. First steps: a signed letter of intent

Predictions For 2014--The Sinocism China Newsletter 01.05.14 | The Sinocism China Newsletter I am taking the plunge with some predictions for 2014. My 2013 predictions, made December 2012 in The New York Times, probably rate a B or so. 1. 2014 is the Year of the Horse but it will also likely become known as the Year of the Grind as Beijing works through its many political, economic, environmental and social challenges; 2. Xi Jinping will continue to consolidate power. 3. 4. 5. 6. 7. 8. 9. 10. What I will add for 2014 is that there will be increasing recognition that Beijing has a well-crafted strategy, not ad-hoc and uncoordinated actions, that it believes will demonize and isolate Japan in the region and force the US to choose between supporting an increasingly unpopular regional partner or applying pressure on Japan such that other countries will see the US as an unreliable ally. Of course any unforeseen, exogenous events could render some or all of these non-operative… Sign up for the free weekly newsletter. This week’s interesting readings: Related: 如何看待地方债务被允许“借新还旧”？ ‘Dr.

Home | Brazilian Bubble When the Growth Model Changes, Abandon the Correlations Chiwoong Lee at Goldman Sachs has a new report out (“China vs. 1970s Japan”, September 25, 2012) in which he predicts that China’s long-term growth rate will drop to 7.5-8.5%. I disagree very strongly with his forecast, of course, and expect China’s growth rate over the next decade to average less than half that number, but the point of bringing up his report is not to disagree with the details of his analysis. I want instead to use his report to illustrate what I believe is a much more fundamental problem with these kinds of research pieces on China. The mistake I will argue he is making is one that is fairly common. This is pretty much the standard analysis provided by the IMF, the World Bank, and both academic and sell-side research, but, as I will argue, this methodology implicitly assumes no real change in the underlying development model – no phase shift, to use a more fashionable term. Lee arrives at his 7.5-8.5% range by comparing China today with Japan in the early 1970s. Why?

Publications You are now leaving the Research Affiliates, LLC website. The following link may contain information concerning investments, products or other information. Research Affiliates, LLC is not responsible for the accuracy or completeness of information on non-affiliated websites. The material available on non-affiliated websites has been produced by entities that are not affiliated with Research Affiliates, LLC. Descriptions of, references to, or links to products or publications within any non-affiliated linked website does not imply endorsement of that product or publication by Research Affiliates, LLC. Agree Are Chinese companies sitting on the next debt crisis? Nothing gets reads like a shadow banking story. Articles on China's local government debt pull page views too, conjuring images of small-town officials erecting enormous stadiums or skyscrapers on the edges of corn fields. Often left out of the country's overall debt picture is that which has been accrued in the corporate sector – simply not as tantalizing. But corporate debt could be one of the biggest risks lurking in China's financial sector. “That's something the market doesn't pay too much attention to … Usually the top two things that people will highlight is local debt and shadow banking,” Zhu Haibin, chief China economist at JPMorgan, said at a talk last week in Shanghai. “But we label corporate debt as the No. 1 concern.” By JPMorgan's count, debt in China's corporate sector stands around 105% of GDP, up from 90% four years ago and far higher than both its advanced and emerging market peers. China's GDP growth is on a slow downward trend.

George Magnus | George Magnus – Economist and Author The price of everything “..Fed and ECB policies aim to reassure financial market participants rather than keeping them guessing. In the “good old days”, before quantitative easing, forward guidance and zero real interest rates, investors, asset managers, traders and bankers were forced to make difficult but educated guesses about the opportunities and vulnerabilities in financial markets. The danger of making a bad guess was, and should remain, an important restraint on excesses and systemic risk. “Today’s market participants are babied with excessively explicit “forward guidance”, supported by historically low interest rates and yields (especially in real terms) and central bank purchases if markets weaken. Such a “safety net” makes investors and traders so complacent they panic at any hint of normalised yield curves and real interest rates, as occurred in bond markets when chairman Ben Bernanke dared mention “tapering” in May 2013 and today’s downturn in emerging markets. To read more,

The PBoC’s monetary supremacy over Brazil (but don’t blame the Chinese) Brazilian Finance Minister Guido Mantega likes to blame the Federal Reserve (and the US in general) for most evils in the Brazilian economy and he has claimed that the fed has waged a ‘currency war’ on Emerging Market nations. As my loyal readers know I think that it makes very little sense to talk about a currency war and I strongly believe that any nation with free floating exchange rates is in full control of monetary conditions in the country and hence of both the price level and nominal GDP. However, here the key is a freely floating exchange rate. Hence, a country with a fixed exchange rate – like Hong Kong or Denmark – will “import” the monetary policy from the country its currency is pegged to – the case of Hong Kong to the US and in the case of Denmark to the euro zone. In reality few countries in the world have fully freely floating exchange rates. Hence, as I argued in my previous post on Turkey many – if not most – central banks suffers from fear-of-floating. Like this:

The Nifty Fifty Market | Pension Partners AdvisorBlog™ “Dow, S&P 500 close at new record highs” – Every Major Financial Publication, June 2, 2014 You wouldn’t know it after reading any major financial publication yesterday, but the average U.S. stock is down over -1% thus far in 2014. But how can that be if we’re being told almost daily that the Dow and S&P 500 are hitting new all-time highs? The answer is likely to surprise you, especially if you have been focused solely on the large cap space. There is a massive divergence going on between the haves and have-nots, or the largest capitalization stocks and the rest of the equity market. There has been a nearly perfect relationship in 2014 between the size of a company and its return. Market historians will recall the term “Nifty 50” originated in the 1960’s bull market to describe 50 wildly popular large-cap stocks at the time. The question for investors, of course, is what this selective advance means for the markets going forward. Mr. Related Posts: No Related Posts

Marginal REVOLUTION — Small Steps Towards A Much Better World ijapicap