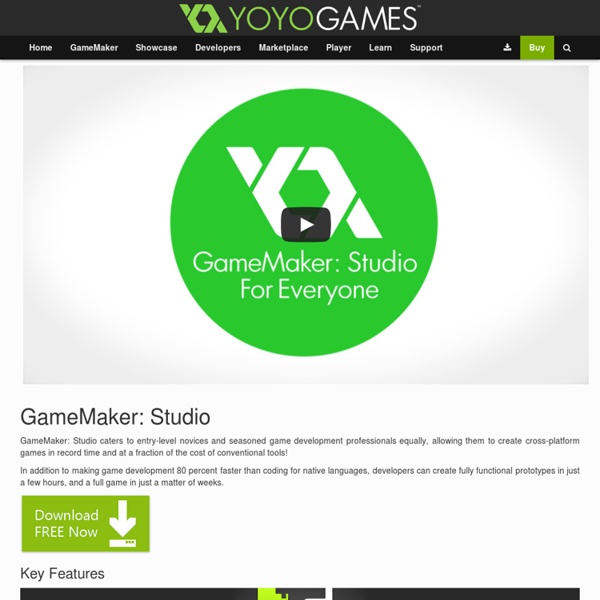 GameMaker: Studio caters to entry-level novices and seasoned game development professionals equally, allowing them to create cross-platform games in record time and at a fraction of the cost of conventional tools! In addition to making game development 80 percent faster than coding for native languages, developers can create fully functional prototypes in just a few hours, and a full game in just a matter of weeks. Key Features GameMaker: Studio Feature Comparison *Only available for approved Xbox developers. Click here for more information. ** Only available for registered Sony developers. Older versions of GameMaker Looking for GameMaker for Windows or GameMaker for Mac? System Requirements For a full list of system requirements for GameMaker: Studio click here. Related:  computing • Tutoriales/Programas/Otros

ORNL unveils 3D-printed Shelby Cobra in Detroit It stands to reason that if you had a big enough 3D printer, one of the first things you might do is print a replica of a vintage 1965 Shelby Cobra sportscar, and that's what the Oak Ridge National Laboratory (ORNL) did for the 2015 North American International Auto Show (NAIAS) in Detroit. The result of a project that took only six weeks from conception to finished product, the vehicle not only celebrates the Shelby Cobra's 50th anniversary, but also acts as a demonstration of modern additive manufacturing and rapid prototyping technology. View all From the outside, the 1,400-lb (635-kg) ORNL Cobra looks like a well-made Shelby replica with an updated digital display, but it hides 500 lb (228 kg) of 3D-printed parts made of 20 percent carbon fiber. These make up the shell, the support frame, the passenger monocoque,and the grille. The purpose of the 3D-printed Shelby isn't just to show that there's more than one way to make a car. Source: ORNL Share

Comunidad Game Maker Gamestar Mechanic Digital Training and Transformation | Decoded GameMaker: Studio on Steam Update Notes The GameMaker: Studio family of products caters to entry-level novices and seasoned game development professionals equally allowing them to create casual and social games for Steam Workshop, iOS, Android, Windows Phone, desktop and the Web (HTML5) in record time and at a fraction of the cost! As well as making games development 80 percent faster than coding for native languages, developers can create fully functional prototypes in just a few hours, and a full game in just a matter of weeks. And when you're done, GameMaker: Studio™ will produce an “app store”-ready iOS, Android, Windows Store, Windows Phone or OS X app, Windows executable or HTML5 code, all at the push of a button and all from the same source code. On top of this, you also gain instant access to more than 40 million registered Steam users through Steam Workshop, with direct upload straight from GameMaker: Studio™! Upgrade Options Key features:

Outernet: Humanity's Public Library Humanity's Public Library #outernetrequest The content on Outernet is chosen democratically. We will offer numerous channels for users to request content, including SMS, Twitter, email, post, and our website. It is a unique challenge to give those without access a means to vote, but it is a challenge we embrace. For now, we accept content requests via posts to our Facebook page in the following format: #OuternetRequest URL * URL is the address of a page or a file Request content The Outernet signal Outernet continuously broadcasts information from space. The core archive This collection of the most valuable information from the web is perpetually broadcast by Outernet. The queue Outernet’s users request content to be broadcast through The Queue. Priority content In instances where an individual or organization chooses to schedule a broadcast date for their content, Outernet offers a fee-based priority feature. Support Outernet As a thank you, we’ll broadcast your picture from space