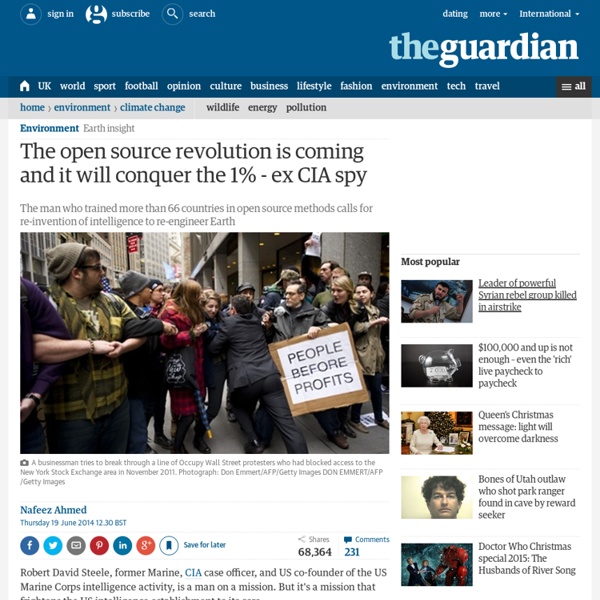 Robert David Steele, former Marine, CIA case officer, and US co-founder of the US Marine Corps intelligence activity, is a man on a mission. But it's a mission that frightens the US intelligence establishment to its core.With 18 years experience working across the US intelligence community, followed by 20 more years in commercial intelligence and training, Steele's exemplary career has spanned almost all areas of both the clandestine world. Steele started off as a Marine Corps infantry and intelligence officer. After four years on active duty, he joined the CIA for about a decade before co-founding the Marine Corps Intelligence Activity, where he was deputy director. Widely recognised as the leader of the Open Source Intelligence (OSINT) paradigm, Steele went on to write the handbooks on OSINT for NATO, the US Defense Intelligence Agency and the U.S. Special Operations Forces. But the CIA wasn't happy, and ensured that Steele was prohibited from running a second conference. Dr.

Foundations of Modern Social Theory Professor Iván Szelényi, William Graham Sumner Professor of Sociology (Emeritus) Description This course provides an overview of major works of social thought from the beginning of the modern era through the 1920s. Attention is paid to social and intellectual contexts, conceptual frameworks and methods, and contributions to contemporary social analysis. Writers include Hobbes, Locke, Rousseau, Montesquieu, Adam Smith, Marx, Weber, and Durkheim. 20 Principles for Successful Community Organizing By Si Kahn / alternet.org 1. Most people are motivated primarily by self-interest. As a creative community organizer, you are always trying to figure out people’s common self-interest, the glue that binds political organizations and movements. 2. Beyond capitalism and socialism: could a new economic approach save the planet? To avoid social, environmental and economic collapse, the world needs to move beyond the standard choices of capitalism or socialism. That’s the conclusion of a new report released Wednesday by US think tank Capital Institute. The non-partisan think tank argues that both systems are unsustainable, even if flawlessly executed, and that economists need to look to the “hard science of holism” to debunk outdated views held by both the left and the right. Jan Smuts, who coined the term “holism” in his 1926 book, Holism and Evolution, defined it as the “tendency in nature to form wholes that are greater than the sum of the parts”. For example, in the case of a plant, the whole organism is more than a collection of leaves, stems and roots. Focusing too closely on each of these parts, the theory argues, could get in the way of understanding the organism as a whole.

Reviews Library in 2007 Before Donation to GMUClick on Image to Enlarge Below is a link to the one other reviewer at Amazon that I pay attention to:Herbert Calhoun: Top Non-Fiction Reviewer Recent Meta Briefings: The Holy Family by Marx and Engels The Holy Family Chapter VI 3) d) Critical Battle Against French Materialism “Spinozism dominated the eighteenth century both in its later French variety, which made matter into substance, and in deism, which conferred on matter a more spiritual name.... Spinoza’s French school and the supporters of deism were but two sects disputing over the true meaning of his system.... The simple fate of this Enlightenment was its decline in romanticism after being obliged to surrender to the reaction which began after the French movement.” That is what Criticism says.

Sociology What this handout is about This handout introduces you to the wonderful world of writing sociology. Before you can write a clear and coherent sociology paper, you need a firm understanding of the assumptions and expectations of the discipline. You need to know your audience, the way they view the world and how they order and evaluate information. So, without further ado, let’s figure out just what sociology is, and how one goes about writing it. What is sociology, and what do sociologists write about?

You Bet Your Garden - The New Treated Woods: Safe for Garden Use? The New Treated Woods: Safe for Garden Use? Q. I want to build some cold frames but am confused about what type of wood to use. The third great wave MOST PEOPLE ARE discomfited by radical change, and often for good reason. Both the first Industrial Revolution, starting in the late 18th century, and the second one, around 100 years later, had their victims who lost their jobs to Cartwright’s power loom and later to Edison’s electric lighting, Benz’s horseless carriage and countless other inventions that changed the world. But those inventions also immeasurably improved many people’s lives, sweeping away old economic structures and transforming society. They created new economic opportunity on a mass scale, with plenty of new work to replace the old. A third great wave of invention and economic disruption, set off by advances in computing and information and communication technology (ICT) in the late 20th century, promises to deliver a similar mixture of social stress and economic transformation. Powerful, ubiquitous computing was made possible by the development of the integrated circuit in the 1950s.