Corporate Imperalism. French Imperialism. UN Inpearialism. Sacrifice Zones. Saudi Imperalism. Origins and history. New Imperialism. The qualifier "new" is used to differentiate modern imperialism from earlier imperial activity, such as the so-called first wave of European colonization between the 15th and early-19th centuries.[1][2] In the first wave of colonization, European powers conquered and colonized the Americas and Siberia; they then later established more outposts in Africa and Asia. 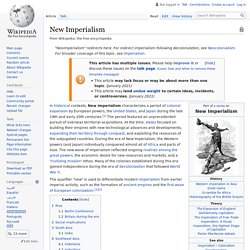 Rise[edit] The American Revolution (1775–83) and the collapse of the Spanish Empire in Latin America around 1820 ended the first era of European imperialism. Especially in Great Britain these revolutions helped show the deficiencies of mercantilism, the doctrine of economic competition for finite wealth which had supported earlier imperial expansion. In 1846, the Corn Laws were repealed and manufacturers gained, as the regulations enforced by the Corn Laws had slowed their businesses. With the repeal in place, the manufacturers were then able to trade more freely. The Congress of Vienna by Jean-Baptiste Isabey (1819). Asia[edit] Mining industry of South Africa. Mining in South Africa has been the main driving force behind the history and development of Africa's most advanced and richest economy. 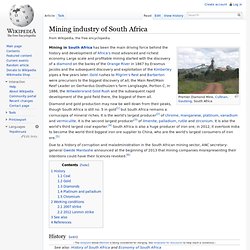 Large scale and profitable mining started with the discovery of a diamond on the banks of the Orange River in 1867 by Erasmus Jacobs and the subsequent discovery and exploitation of the Kimberley pipes a few years later. Gold rushes to Pilgrim's Rest and Barberton were precursors to the biggest discovery of all, the Main Reef/Main Reef Leader on Gerhardus Oosthuizen's farm Langlaagte, Portion C, in 1886, the Witwatersrand Gold Rush and the subsequent rapid development of the gold field there, the biggest of them all. Diamond and gold production may now be well down from their peaks, though South Africa is still no. 5 in gold[1] but South Africa remains a cornucopia of mineral riches. It is the world's largest producer[2] of chrome, manganese, platinum, vanadium and vermiculite. History[edit] Coal[edit] Israeli billionaire sells Congo oil rights for 300 times purchase price. Thu Jan 23, 2014 12:00am GMT * Controversial businessman sells asset for 300 times purchase price * Congo and Angola to collaborate in development of offshore oil block * Company defends deal as beneficial to Congo, campaigners criticise lack of transparency By Peter Jones KINSHASA, Jan 23 (Reuters) - Israeli billionaire businessman Dan Gertler sold one of his Congo-based oil companies to the government last year for $150 million - 300 times the amount paid for the oil rights - in a deal criticised by transparency campaigners. 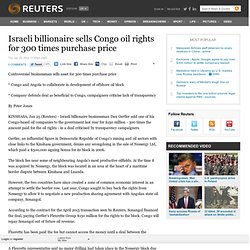 Gertler, an influential figure in Democratic Republic of Congo's mining and oil sectors with close links to the Kinshasa government, denies any wrongdoing in the sale of Nessergy Ltd, which paid a $500,000 signing bonus for its block in 2006. Goupers & The Treaty of Versailes. [320] Socialist in Seattle: Kshama Sawant's Revolution, The Indigenous Fight Against Keystone XL. Chris Hedges Part I: Crisis Cults and the Collapse of Industrial Civilization. Chris Hedges Part 2: The Military Mind & the Antidote to Defeatism. Aid in reverse: How poor countries develop rich countries. The idea of international development aid lies at the heart of a tremendously successful PR campaign. 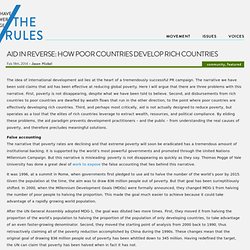 The narrative we have been sold claims that aid has been effective at reducing global poverty. Here I will argue that there are three problems with this narrative. First, poverty is not disappearing, despite what we have been told to believe. Second, aid disbursements from rich countries to poor countries are dwarfed by wealth flows that run in the other direction, to the point where poor countries are effectively developing rich countries. Third, and perhaps most critically, aid is not actually designed to reduce poverty, but operates as a tool that the elites of rich countries leverage to extract wealth, resources, and political compliance. It was 1996, at a summit in Rome, when governments first pledged to use aid to halve the number of the world’s poor by 2015.