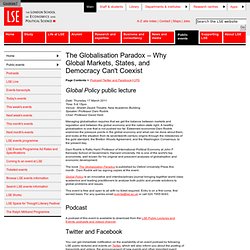 A healthy globalisation is one that is not pushed too far. Esteemed economist Dani Rodrik examines the pressure points in the global economy and what can be done about them, and looks at the situation from its seventeenth-century origins through the milestones of the gold standard, the Bretton Woods Agreement, and the Washington Consensus, to the present day. Dani Rodrik is Rafiq Hariri Professor of International Political Economy at John F. The book The Globalization Paradox| is published by Oxford University Press this month. This event is free and open to all with no ticket required. A video of a talk on structural change and convergence.

Why Inequality Matters: The Housing Crisis, The Justice System & Capitalism. Extreme economic inequality is among the most destructive forces in a society. 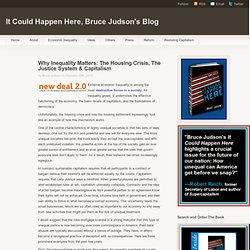 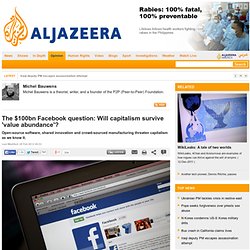 And where is the $100bn in the company's estimated value coming from? This is not a new debate. It resurfaces regularly in the blogosphere and academic circles, ever since Tiziana Terranova coined the term "Free Labour" to indicate a new form of capitalist exploitation of unpaid labour - firstly referring to the viewers of classic broadcast media, and now to the new generation of social media participants on sites such as Facebook. The argument can be summarised very succinctly by the catch phrase: "If it's free, then you are the product being sold. " This term was recently relaunched in an article by University of Essex academics Christopher Land and Steffen Böhm, entitled "They are exploiting us! This line of argument is misleading, however, because it conflates two types of value creation that were already recognised as distinct by 18th century political economists.

Engineering scarcity But this is no longer happening. What Isn’t for Sale? - Magazine. Market thinking so permeates our lives that we barely notice it anymore. 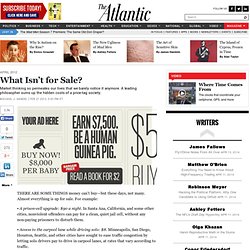 A leading philosopher sums up the hidden costs of a price-tag society. There are some things money can’t buy—but these days, not many. Almost everything is up for sale. For example: • A prison-cell upgrade: $90 a night. . • Access to the carpool lane while driving solo: $8. . • The services of an Indian surrogate mother: $8,000. . • The right to shoot an endangered black rhino: $250,000. . • Your doctor’s cellphone number: $1,500 and up per year. . • The right to emit a metric ton of carbon dioxide into the atmosphere: $10.50. Capitalism Against Capitalists. John Lanchester · Marx at 193 · LRB 5 April 2012. In trying to think what Marx would have made of the world today, we have to begin by stressing that he was not an empiricist. 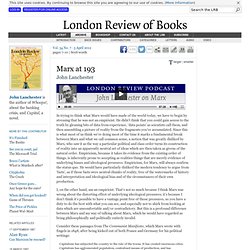 He didn’t think that you could gain access to the truth by gleaning bits of data from experience, ‘data points’ as scientists call them, and then assembling a picture of reality from the fragments you’ve accumulated. Since this is what most of us think we’re doing most of the time it marks a fundamental break between Marx and what we call common sense, a notion that was greatly disliked by Marx, who saw it as the way a particular political and class order turns its construction of reality into an apparently neutral set of ideas which are then taken as givens of the natural order. Empiricism, because it takes its evidence from the existing order of things, is inherently prone to accepting as realities things that are merely evidence of underlying biases and ideological pressures. Empiricism, for Marx, will always confirm the status quo. So he’s a he.

Shift Magazine » climate action » Against Kamikaze Capitalism: Oil, Climate Change and the French refinery blockades. Bifo says relax by malcolm harris. Of the anti-capitalist scholars and intellectuals who prescribe a political program, Franco Berardi might have the most counter-intuitive ideas. 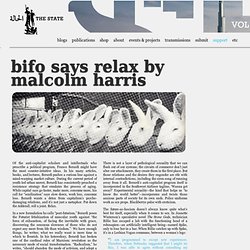 In his many articles, books, and lectures, Berardi pushes a curious line against a mind-warping market culture. During the current period of youth-led urban unrest, Berardi has consistently preached a resistance strategy that emulates the process of aging. While capital says go faster, make more, consume more, his call for “senilization” says slow down, work less, consume less. Berardi wants a detox from capitalism’s psyche-damaging relations, and it’s not just a metaphor. Capitalism: A Ghost Story. Is it a house or a home? 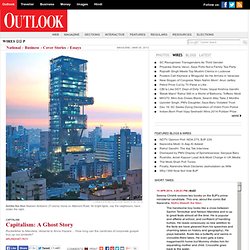 A temple to the new India, or a warehouse for its ghosts? Ever since Antilla arrived on Altamont Road in Mumbai, exuding mystery and quiet menace, things have not been the same. “Here we are,” the friend who took me there said, “Pay your respects to our new Ruler.” Antilla belongs to India’s richest man, Mukesh Ambani. The Future of Global Capitalism, Convergence or Divergence Across the World. Jungle Ethics Financialism vs. Free Market Capitalism. Proposals for adequate regulation and enforcement in the financial markets often run into objections from advocates of free-market capitalism. 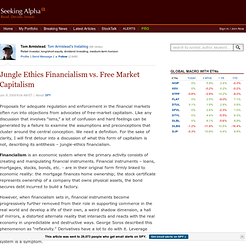 Like any discussion that involves “isms,” a lot of confusion and hard feelings can be generated by a failure to examine the assumptions and preconceptions that cluster around the central conception. We need a definition.