American Airlines gave its workers a raise. Wall Street freaked out. How an Ad Campaign Made Lesbians Fall in Love with Subaru. Sorry, Pepsi Haters, But Social Justice Needs Capitalism – Liberal Currents. Last week’s backlash to the Pepsi ad featuring Kendall Jenner and an army of hipster-looking protesters was fast and fierce. 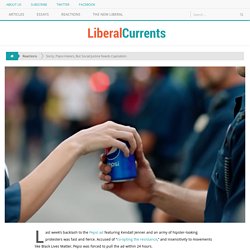 Accused of “co-opting the resistance,” and insensitivity to movements like Black Lives Matter, Pepsi was forced to pull the ad within 24 hours. The irony of the fiasco is that Pepsi was repping social justice long before it was cool — and forged real progressive change along the way. But in their haste to build a firewall between social justice and corporate capitalism, Pepsi’s haters have missed the ways in which the two are not merely compatible, but in many ways mutually reinforcing. More Woke Than Coke. One Quarter (23%) of In-Debt Canadians Say They’ll Never be Debt Free; Those More Optimistic Say It Will Take 8 Years to Pay Down. Toronto, ON – Three in four Canadians (73%) are currently in debt, whether it is a mortgage only (15%) or some level of consumer debt (58%), a new Ipsos poll for BDO reveals. 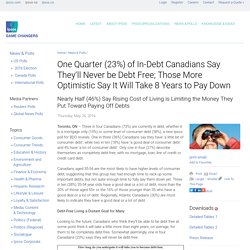 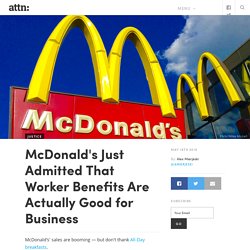 Flickr/Mike Mozart When the burger chain reported an increase in comparable sales for the third straight quarter late last month, CEO Steve Easterbrook said that the positive growth was in part linked to better employee benefits and higher wages. Easterbrook said lower employee turnover and higher customer satisfaction were linked to employee compensation package improvements. "The improvements we made to our compensation and benefits package to employees in U.S. -company operated restaurants, along with expanding [the tuition assistance program] Archways to Opportunity ... have resulted in lower crew turnover and higher customer satisfaction scores," Easterbrook said in a call to Wall Street analysts, Fortune Reported.

In April last year, the company announced it would raise wages for the estimated 90,000 workers employed at company-owned U.S. stores, or about ten percent of McDonald's restaurants. John Taggart, epa. The World’s Favorite New Tax Haven Is the United States. Last September, at a law firm overlooking San Francisco Bay, Andrew Penney, a managing director at Rothschild & Co., gave a talk on how the world’s wealthy elite can avoid paying taxes. 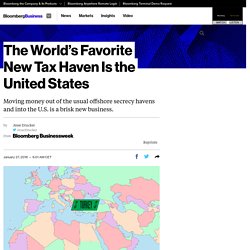 His message was clear: You can help your clients move their fortunes to the United States, free of taxes and hidden from their governments. Some are calling it the new Switzerland. After years of lambasting other countries for helping rich Americans hide their money offshore, the U.S. is emerging as a leading tax and secrecy haven for rich foreigners. By resisting new global disclosure standards, the U.S. is creating a hot new market, becoming the go-to place to stash foreign wealth.

Everyone from London lawyers to Swiss trust companies is getting in on the act, helping the world’s rich move accounts from places like the Bahamas and the British Virgin Islands to Nevada, Wyoming, and South Dakota. Why a bunch of Silicon Valley investors are suddenly interested in universal basic income. Basic income is having a moment. 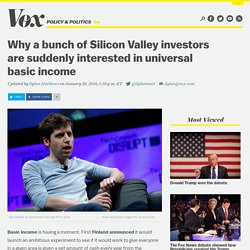 First Finland announced it would launch an ambitious experiment to see if it would work to give everyone in a given area is given a set amount of cash every year from the government, no strings attached. Now the Silicon Valley seed investment firm Y Combinator has announced it wants to fund a basic income experiment in the US. Fast Fashion Problems- Why I Don't Buy Cheap Clothes. Before I buy any piece of clothing or accessory, I like to know a little bit about where and how it’s made. 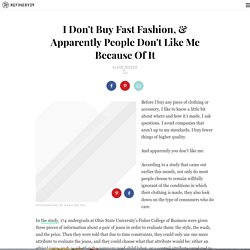 I ask questions. I avoid companies that aren’t up to my standards. When the Boss Says, 'Don't Tell Your Coworkers How Much You Get Paid' Last fall, I became a barista in a small, “socially responsible” coffee company. 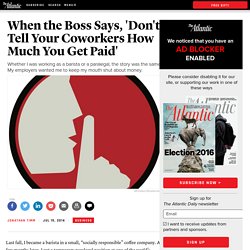 A few months later, I got a temporary paralegal position at one of the world’s biggest multinational, corporate law firms. The two companies had little in common, but both told me one thing: Don't talk to your coworkers about your pay. At the law firm, this warning was conveyed to me during my salary negotiation. After I had worked for three months through a temp agency, the firm offered me a spot on their payroll.

Given the size and success of the firm, the starting salary seemed low. Economix Comix. A Documentary Film. 7 Everyday Things Poor People Worry About That Rich People Never Do. Being poor is hard work. 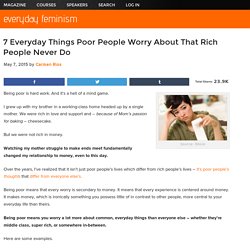 The Average Hipster Employs 27 Slaves Each Day. Here's How To Change That. Eizabeth Robsong Ordon. The Economics (and Nostalgia) of Dead Malls. OWINGS MILLS, Md. — Inside the gleaming mall here on the Sunday before Christmas, just one thing was missing: shoppers. 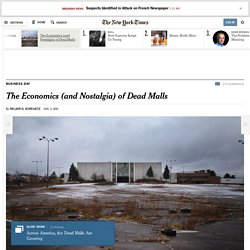 The upbeat music of “Jingle Bell Rock” bounced off the tiles, and the smell of teriyaki chicken drifted from the food court, but only a handful of stores were open at the sprawling enclosed shopping center. A few visitors walked down the long hallways and peered through locked metal gates into vacant spaces once home to retailers like H&M, Wet Seal and Kay Jewelers. “It’s depressing,” Jill Kalata, 46, said as she tried on a few of the last sneakers for sale at the Athlete’s Foot, scheduled to close in a few weeks. “This place used to be packed. And Christmas, the lines were out the door. The Owings Mills Mall is poised to join a growing number of what real estate professionals, architects, urban planners and Internet enthusiasts term “dead malls.” Continue reading the main story Share of malls with vacancy rates of 10 percent or higher.

Stop land grabs. What is a land grab? 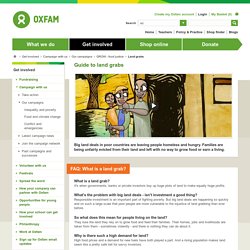 It's when governments, banks or private investors buy up huge plots of land to make equally huge profits. What's the problem with big land deals - isn't investment a good thing? Responsible investment is an important part of fighting poverty. But big land deals are happening so quickly and on such a large scale that poor people are more vulnerable to the injustice of land grabbing than ever before. So what does this mean for people living on the land? They lose the land they rely on to grow food and feed their families. Strength In Every Day - Gender Dichotomy in Cancer Culture - Gender Dichotomy in Cancer Culture. The Invisible Hand - Radio Summer - Radio - CBC Player. Citizen Capitalism. Have a beef with a local business? Want action on a community project? Interested in starting a sustainability venture? Put your issue on paper.

Here are our top tips for writing a successful letter. “Citizen Capitalism” makes you responsible for your world. Posted by Tom Megginson | 25-06-2012 20:38 | Category: Consumerism I’ve always maintained that those of us who live in capitalist democracies are responsible for the world we live in. Despite the underground forces of corruption and manipulation, we still have a vote and we still have a dollar to spend. That’s the idea behind “Citizen Capitalism”, a movement founded in Toronto by adman Andy Macaulay (formerly of Zig) Ontario College of Art and Design University (OCAD) instructor Anne Sutherland, and magazine editor Beth Thompson.