Collection Section 4 Commentary - Gaming, Sport and Entertainment. Computers and Chess - A History - Chess.com. In 1945 Alan Turing (1912-1954) used chess-playing as an example of what a computer could do. 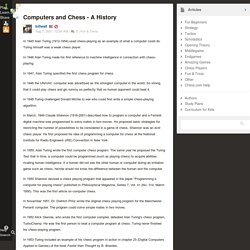 Turing himself was a weak chess player. In 1946 Alan Turing made his first reference to machine intelligence in connection with chess-playing. In 1947, Alan Turing specified the first chess program for chess. In 1948 the UNIVAC computer was advertised as the strongest computer in the world. So strong, that it could play chess and gin rummy so perfectly that no human opponent could beat it. In 1948 Turing challenged Donald Michie to see who could first write a simple chess-playing algorithm. In March, 1949 Claude Shannon (1916-2001) described how to program a computer and a Ferranti digital machine was programmed to solve mates in two moves. AI just won a poker tournament against professional players. Tim Kaulen/Carnegie Mellon University By Timothy Revell An AI just claimed another gaming victory over humans by winning a 20-day poker tournament. 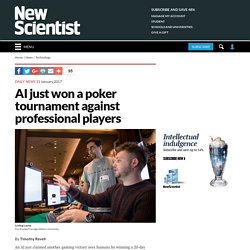 The AI, called Libratus, took on four of the world’s best Heads-Up No-Limit Texas Hold ‘Em poker players at a Pennsylvania casino. After 120,000 hands, Libratus won with a lead of over $1.7 million in chips. “I’m feeling great,” says Tuomas Sandholm, a computer scientist at Carnegie Mellon University who was part of the team that created the AI.

A poker-proficient AI is remarkable because poker is a game of “imperfect information”: players don’t know what cards their opponents have, so never have a full view of the state of play. Advertisement “It’s a really important milestone for artificial intelligence,” says Georgios Yannakakis at the University of Malta. Libratus’s algorithms are not specific to poker, or even just to games. AlphaGo offers a sobering look into the future of man versus machine. VCG/VCG via Getty Images Shortly before what he said would be a “sleepless night” on Monday, Ke Jie, the world number one player of the Chinese board game Go, took to social media. 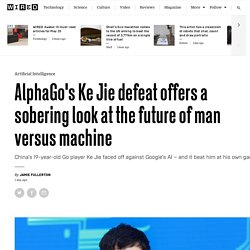 The next morning he was scheduled to play his first of three games against AlphaGo, the algorithm developed by DeepMind, the British AI company owned by Google. “It may defeat Lee Sedol, but not me,” 19-year-old Ke boasted, after accepting the AlphaGo challenge, referring to the South Korean pro player toppled by DeepMind’s system last year. Writing on Weibo on Monday, his tone seemed less bullish as he announced he would never take on an AI player again after this week’s games. AI is one step closer to mastering StarCraft - The Verge. Artificial Intelligence in Sports on the Example of Weight Training. America takes on Japan in terrifying giant mech battle this August. In 2015, a team of American engineers created the MegaBots Mk. 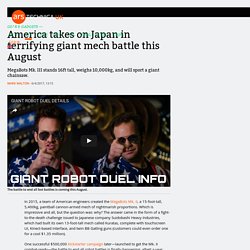 II, a 15-foot-tall, 5,400kg, paintball cannon-armed mech of nightmarish proportions. Which is impressive and all, but the question was: why? The answer came in the form of a fight-to-the-death challenge issued to Japanese company Suidobashi Heavy Industries, which had built its own 13-foot-tall mech called Kuratas, complete with touchscreen UI, Kinect-based interface, and twin BB Gatling guns (customers could even order one for a cool $1.35 million). One successful $500,000 Kickstarter campaign later—launched to get the Mk. II combat-ready—the battle to end all robot battles is finally happening, albeit a year later than originally planned. MegaBots has been documenting the construction of the Mk. More information is promised over the coming weeks. The History of Chatbots [INFOGRAPHIC] Mitsuku Chatbot. Visual Chatbot. When beauty is in the eye of the (robo)beholder.

For over a year, I worked as a beauty editor, writing and researching about the products, trends, and people that make us want to look a certain way. 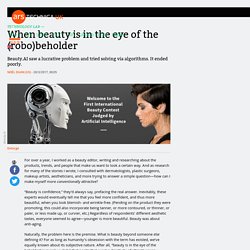 And as research for many of the stories I wrote, I consulted with dermatologists, plastic surgeons, makeup artists, aestheticians, and more trying to answer a simple question—how can I make myself more conventionally attractive? “Beauty is confidence,” they’d always say, prefacing the real answer. Rise of the AI fashion police - The Verge. The race to build the world’s first sex robot. In the brightly lit robotics workshop at Abyss Creations’ factory in San Marcos, California, a life-size humanoid was dangling from a stand, hooked between her shoulder blades. 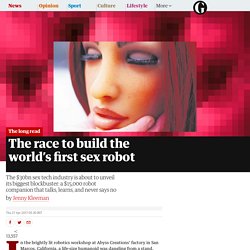 Her name was Harmony. She wore a white leotard, her chest was thrust forward and her French-manicured fingers were splayed across the tops of her slim thighs. Harmony is a prototype, a robotic version of the company’s hyper-realistic silicone sex toy, the RealDoll. The Realbotix room where she was assembled was lined with varnished pine surfaces covered with wires and circuit boards, and a 3D printer whirred in the corner, spitting out tiny, intricate parts that will be inserted beneath her PVC skull. Her hazel eyes darted between me and her creator, Matt McMullen, as he described her accomplishments. Harmony smiles, blinks and frowns. Harmony is the culmination of 20 years’ work making sex dolls, and five years of robot research and development. McMullen had toyed with animatronics for years. She paused.