How to Use Google Search More Effectively [INFOGRAPHIC] 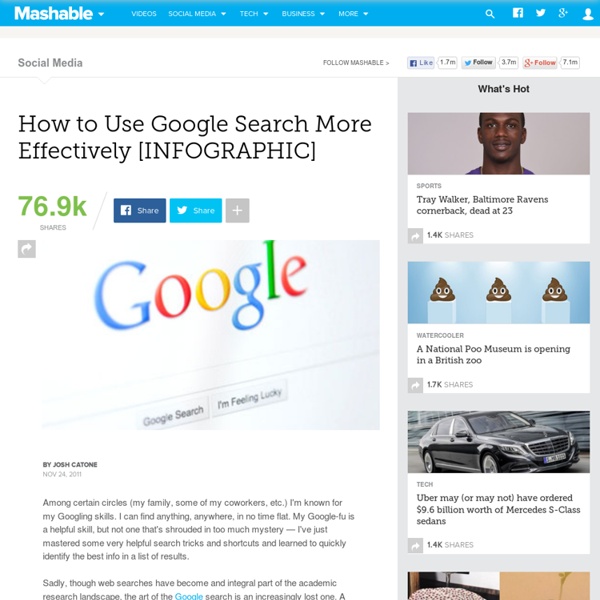 Among certain circles (my family, some of my coworkers, etc.) I'm known for my Googling skills. I can find anything, anywhere, in no time flat. My Google-fu is a helpful skill, but not one that's shrouded in too much mystery — I've just mastered some very helpful search tricks and shortcuts and learned to quickly identify the best info in a list of results. Sadly, though web searches have become and integral part of the academic research landscape, the art of the Google search is an increasingly lost one. A recent study at Illinois Wesleyan University found that fewer than 25% of students could perform a "reasonably well-executed search." That search process also included determining when to rely on Google and when to utilize scholarly databases, but on a fundamental level, it appears that many people just don't understand how to best find the information they seek using Google. Thanks to the folks at HackCollege, a number of my "secrets" are out. Infographic via HackCollege

Building a Facebook Timeline for Higher Education So what does the roll out of Facebook Timeline mean for higher education beyond bigger pictures and a new way of doing things? Plenty. Colleges and universities around the country are always searching for better ways to tell their story. They struggle with the simple ways to talk about all they have going on.

Mac OS X keyboard shortcuts By pressing certain key combinations, you can do things that normally need a mouse, trackpad, or other input device. To use a keyboard shortcut, press and hold one or more modifier keys and then press the last key of the shortcut. For example, to use Command-C (copy), press and hold the Command key, then the C key, then release both keys. Mac menus and keyboards often use symbols for certain keys, including modifier keys: Command (or Cmd) ⌘Shift ⇧ Option (or Alt) ⌥Control (or Ctrl) ⌃ Google's Apps for Education and the New Privacy Policy Privacy | Features Google's Apps for Education and the New Privacy Policy By Dian Schaffhauser02/15/12

How does MediaWiki work? You probably know Wikipedia, the free encyclopedia, and may possibly be a little bit confused by similar, but different, words such as Wiki, Wikimedia or MediaWiki. To avoid a possible confusion between the words you may first want to read the article about the names where the differences are explained. General Overview Track Changes on an iPad with Office2 For many academics, the ability to track changes and otherwise make comments on a shared document is an essential part of one’s work. Many people use this word processing tool to collaborate on writing projects, and probably at least as many use it to comment on or grade student writing. For these folks, the fact that no iPad-based word processor supported track changes dramatically limited the device’s utility.

5 Ways Apps Fit Into Curriculum and Learning Strategies As the recently released "2012 Horizon Report: K-12 Edition" suggests, mobile devices and apps will become mainstream in a year or less. But apps aren't all about playing games. Converge asked three instructional technology coordinators and teachers to share how they're using apps to help students achieve learning goals. 1.